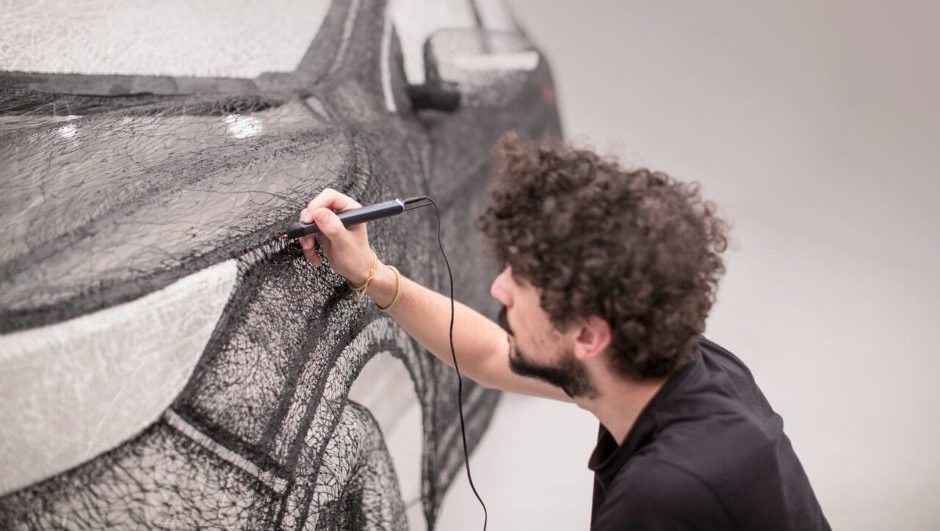 Not long ago, we wrote an article about a newly released 3D pen called the 3Doodler. It had been brought to market less than a week before press time. Now, the same company has released a professional version of the same product. So, how does the 3Doodler Pro compare to the original 3Doodler pen? Let’s take a look at the features of this new offering, and see what’s on the drawing board.

The idea for the 3Doodler pen came when, Maxwell Bogue, the founder of WobbleWorks LLC, became frustrated waiting for a 3D printer to create an object. He thought, like many of us have thought, that he could just as easily draw the item rather than wait.

The pen works somewhat like a hot glue gun. However, instead of extruding glue, the pen extrudes a thin stream of quick-drying plastic. Because the thermoplastic material stiffens so quickly, the user can produce 3 dimensional items that hold their shape.

In many instances, the release of a pro level product means that the new product is significantly difficult to use. This isn’t the case with the 3Doodler Pro. However, it should be noted that this product was specifically designed with professionals in mind. Artists, designers, architects, and engineers will be able to use this product to quickly communicate ideas, and create very basic prototypes. Better yet, they can do so at the lowest possible price point. Imagine an interior designer sitting with a client and literally creating a model of their soon to be new space.

Perhaps the most fascinating thing about the pro version is the fact that up to 65 new materials can be used, as opposed to the single thermoplastic material available with the original version. Designers can draw with wood, metal, or plastic. Then, they can even provide final polishes by sanding or polishing the materials. This means users can create drawings that are even more visually accurate than before. Clearly things have come a long way since our earlier article on this product and its Kickstarter campaign.

Better Than a Printer

Speed isn’t the only advantage here. The average 3D printer can't make large items because of their limited sizes. This can be quite an obstacle for creators interested in making models large enough to put in galleries or show off to clients.

In addition to this, it isn’t very cost effective to develop multiple sizes of 3D printers to meet various design needs. The 3Doodler Pro breaks through this limitation. Users can make their models as big as they need to. In fact, artist Grace Du Prez drew a life sized SUV. That’s not a feat that you could finish using any 3D printer.

If you were to lay the original 3Doodlers next to the 3Doodler Pro, you would certainly notice a few differences. First of all, the product is larger and heavier than its predecessor. This difference is necessary due to the additional features and capabilities.

The first new feature is an included battery pack. This allows creators to create objects without being hindered by a power cord. It can be difficult managing certain drawing tasks when there is a cord to contend with. Another new addition is an LCD temperature display. This let’s users know when the material inside has reached the ideal temperature for extrusion.

Speaking of extrusion, there is now a six-piece die set that artists can use to extrude materials in a variety of shapes and sizes. These nozzles attach to the end of the gun and can be changed out using a fairly simple process that involves heating the gun to 180 C, and then using a key to unscrew one nozzle and replace it with another. It’s almost as simple as using a chuck key to change out a drill bit.

Then, there is the variable speed fan. This means that users can select how quickly or slowly the material cools and hardens according to their needs. A very proficient user might opt for the highest speed while a novice might want more time to add material to a specific part of their model before it hardens.

This product might be designed with pros such as artists in mind, but the truth is that hobbyists will love this tool as well. It’s nice to see a company producing a professional level product while maintaining ease of use.