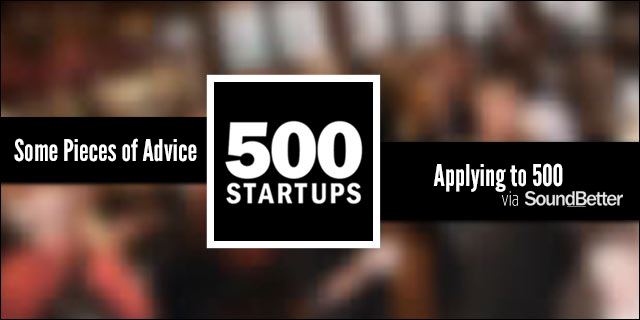 With an acceptance rate roughly between 3 and 5 percent, getting into 500 Startups‘s accelerator program is – to say the least – difficult. (To put those percentages into perspective, consider Stanford's fall 2012 acceptance rate, a much more hopeful 6.6 percent). Yet, despite these staggeringly slim odds, hundreds of startups continue to apply for each upcoming batch – each and every one of them hoping that they'll attain one of the few coveted spots. For companies, 500 Startups is a huge step toward greater things, so startups dedicate a lot of time preparing and perfecting their applications. So, the question is: what are some secrets or tips when it comes to applying?

In August of last year, I spoke to Sachar Gilad to learn a little more about his company SoundBetter, an online marketplace where post-production professionals in the music industry (engineers, producers, studios, session players, etc.) can offer their services to musicians around the world. After the company won both “Best Pitch” and “Readers’ Choice” at Tech Cocktail’s San Francisco Startup Showcase last month, I followed up and learned that SoundBetter was participating in Batch 8 of 500 Startups. So, Gilad is certainly familiar with the application process for 500 Startups – but, more so, he’s familiar with it because he’s gone through the process twice.

SoundBetter is one of the lucky few startups with the proven value and traction to make it into the 500 network. After applying to the accelerator and making it as a finalist the first time around, the company continued to work even harder, applied for a second time, and attained a spot in 500 Startups's eighth batch.

With the spring session having ended recently, and after having gone through the 500 Startups experience, Gilad offers these four pieces of advice for those considering that Batch 10 application:

“Apply – because [500 Startups] is a great program! If you take it seriously, put in the work, take advantage of the network, learn from the mentors, and have something to offer…[then] it will help you accelerate from point A to point B.”

Gilad could not emphasize this point enough times: if you're a startup considering to apply, throw any doubts or hesitations aside, and simply go for it. He stresses the sheer magnitude of the network – both in terms of size and influence – and how it can serve as a major advantage for your company both immediately after 500 Startups and in the long-run. Being exposed to the other startups in 500 Startups, experiencing the startup community around in San Francisco and the Bay area, and actually getting the opportunity to speak with and learn from the people responsible for all the great companies we hear about or for all the knowledgeable blog posts we read about – there's simply no reason one should pass on the opportunity to be considered for the program, even with the high possibility of rejection. When asked about the most noteworthy aspect of 500 Startups, Gilad responded:

“We've been grateful for all the really great guidance. Dave McClure, Parker Thompson – all of the mentors here are some of the smartest people we've ever met…they've been able to offer us truly invaluable feedback.”

2. Prove That You'll Add as Much Value to 500 Startups, as They to You

Show them that their potential investment in your company will be equally worthy as your taking on that investment. The last time I spoke with Gilad was actually after 500 Startups had made their cuts for Batch 7; while SoundBetter was good enough to make it as a finalist, the company was ultimately cut. So, what happened next? He pushed even further to let 500 Startups know that they could derive as much value from SoundBetter as SoundBetter could derive from them.

At the time, Gilad was the sole, non-technical founder, and he was focused primarily on user growth – growing the supply and demand side for this crowdsourcing of music industry talent. Once that community reached critical mass, Gilad put additional focus on monetization and building even more market traction for SoundBetter: he got a technical cofounder, reached out and formed partnerships with ReverbNation and Sonicbids, and started seeing an increase in leads to 12,000 per month. Four months after getting turned down, Gilad re-applied for 500 Startups and made it into Batch 8; for this, he attributes the hard work he and his cofounder put into gaining all that additional traction and market share in such a rapid lapse of time.

3. Find a Connection Within the 500 Network and Impress Them

“Try to see who you know in the [500] network that you can impress, and relay that to the decision-makers…Find someone you can get a meeting with…These might work in your favor.”

Listed on the official tips offered by 500 Startups, they explicitly tell applicants to connect with people you know in the 500 network, and see if they can either recommend your startup or even just give you advice. Gilad echoes this advice. Per the 500 Startups application page:

Ask them if they would be comfortable recommending your company. If you don’t have this network, consider reaching out to 500 mentors who would understand your business and asking (politely) if they would give you some feedback. Don’t be a creep about it. If they dig your company, you can ask them to give us their thoughts.

Our goal is to narrow the initial applications down to about 100 companies we interview. We do these interviews over 3-4 full days. We split up into teams of two, and each company gets interviewed for 15 minutes. You’ll usually do three interviews.

We do this to avoid groupthink, and to give startups the chance to shine even if one interview doesn’t go well. Interviewers include members of the 500 Investment Team, Distribution Team, other 500 staff, and sometimes 500 mentors.

The last piece of advice from Gilad is this: don't slack. 500 Startups is great for one reason: everyone involved works long and passionately – whether they're part of a startup or a mentor or whatever. “A 90-hour week is normal here, but you feed off everyone else who's working just as hard.” According to him, the only way to reap all the benefits from the program is if you commit yourself fully. If you go into the application process thinking that getting in is the hardest part, then you're probably not ready for 500 Startups.

“If people think that getting in is an achievement, it isn't…I mean, it is, but there's more work do be done,” said Gilad. “It's not just about getting in: you have to get in then bust your ass; great – now you're in the club…you're in the league…but, now, you have to prove yourself and work hard.”

Those are all the tips Gilad had to offer. While participating in the spring session, SoundBetter launched a new platform that not only served as a directory of talent in the music industry, but also allowed for actual transactions between people. (Originally, the platform could let you find people to hire, and then perform those transactions independently). “We feel like we're in a different league now than a few months ago…We've seen a lot of jobs posting and closing [on SoundBetter] and it's provided greater validation.” Last month, the company had more than 25,000 site visitors on the demand side, and more than 5,000 industry professionals on the supply side (including Grammy award winners, Gilad notes). Their next step: moving SoundBetter to NYC.

To learn more about SoundBetter, read our previous coverage or visit their website.
Click here to apply for Batch 10 of 500 Startups.