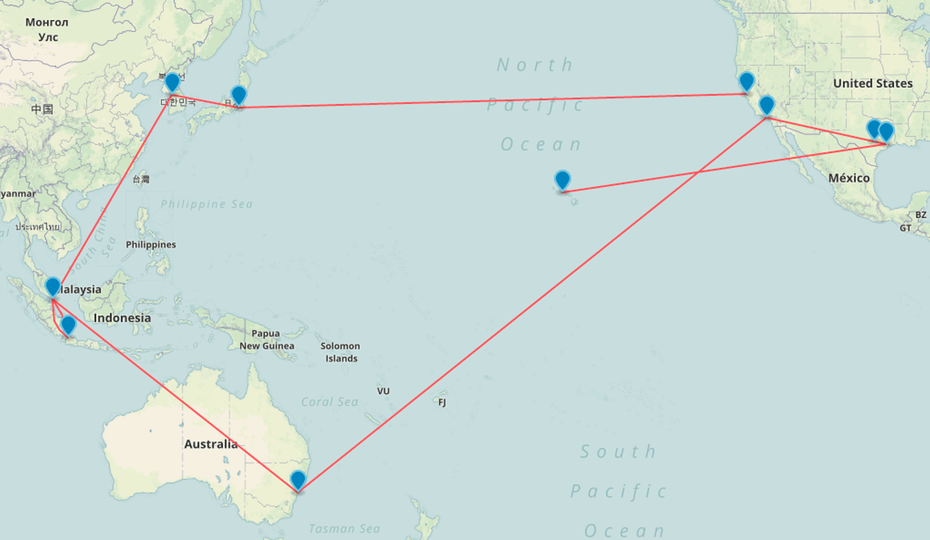 In the beginning of 2015, Buffer CEO Joel Gascoigne gave up his apartment in San Francisco and set out to travel, hitting 11 cities in the first three months of the year. He spent up to a week in Japan, South Korea, Singapore, Indonesia, Santa Monica, Austin, and Houston, and a full month in Australia for a Buffer team retreat.

Gascoigne wrote a recap of his travel experience in a recent blog post, detailing his motivations, successes, and failures. As the CEO of a company with VC funding, Gascoigne wasn’t on holiday – he aimed to stay productive throughout the trip, but that didn’t exactly happen.

“All in all, I do see the travels as somewhat of a failure with regards to my productivity and my contribution to Buffer,” he writes.

If you’re about to embark on some travel and need to keep your productivity up, here’s what Gascoigne learned:

1. Move on the weekends

Gascoigne settled into a rhythm where he worked a normal workweek and then changed cities on the weekends to minimize disruptions. He also realized that getting acclimated to your neighborhood – finding grocery stores and restaurants – takes time, too, so this could be done on the weekends as well.

I personally try to move on the weekends when possible, but sometimes the cheapest flights and trains are mid-week. So it becomes a choice: how much is a productive day of work worth to you?

2. Do your coffee shop research

Gascoigne found out the hard way that not all coffee shops are ideal for remote workers, and he could have done a bit more research in advance to avoid wasting time.

“I could often get to a coffee shop which wasn’t an ideal setup or where the wifi was not quite fast enough, and so it could take a couple of attempts before I found a great one. That took away yet more time,” he explains.

Foursquare is great for finding coffee shops to work from – they even have a “good for working” tag and users will often share the wifi password in the tips and comments.

Gascoigne spent part of his trip traveling solo, getting his social interaction from meeting up with friends and giving talks for other entrepreneurs. But even as someone who’s used to working remotely – Buffer is a distributed team – he still found himself getting distractingly lonely.

“It was a little scary to feel myself affected by this. Some days I lost several hours where I was just feeling down and procrastinating,” he writes.

One of his solutions for combatting loneliness was sticking to a mood-boosting workout routine. Gascoigne signed up for short-term gym memberships in different cities, including Tokyo and Singapore, and ended up working out about 2.5 times a week.

“Keeping up my exercise routine helped me immeasurably during the ‘downs,’ by giving me something to regularly get a win with (and the endorphins released). I never felt down when I was exercising, and it often triggered a high that lasted several hours afterwards,” he writes.

Nowadays, Gascoigne has settled down in Hawaii until June or July – the solution to many of his productivity problems on the road. Because he’s staying in one place, he gets to know the neighborhood and the people there, helping him form a routine, build relationships, and learn about the local culture. He’s fully embraced “slow travel” – my favorite method, where you stay in one place for several months. Although digital nomads have the freedom to move all the time, many of them move at a much more leisurely pace than you might expect – for their sanity and productivity.