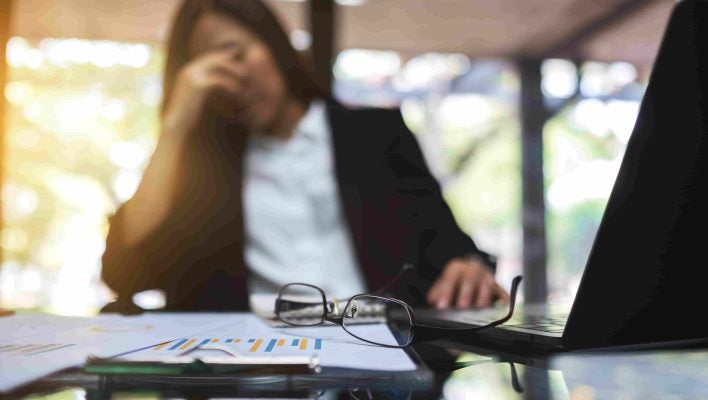 47% of all small businesses could be closed by fall, according to a new estimate from a poll of over 4,300 companies.

The figure creeps actually creeps over 50% in a number of the US States, which speaks to the state of the economy in America and beyond.

According to the survey, the retail industry – which nowadays includes ecommerce sites and other online businesses, too – is suffering the hardest.

The survey – conducted by Alignable – gathered comments and answers from 4,392 businesses, most of which are based in the US and Canada.

“By combining each respondent's answers to the two questions” Alignable’s Chuck Casto explains, “we were able to determine the percentage of businesses that are in jeopardy of closing before the fall, if conditions do not improve for them.”

Alignable said that seeing 47% of small businesses admit that they probably won’t make enough money to stay afloat is “higher than [they] expected.”

Other concerning statistics include the fact that under one quarter (24%) of small business owners said they expected to make more this summer than the summer of 2021, and 54% are on track to generate less income. 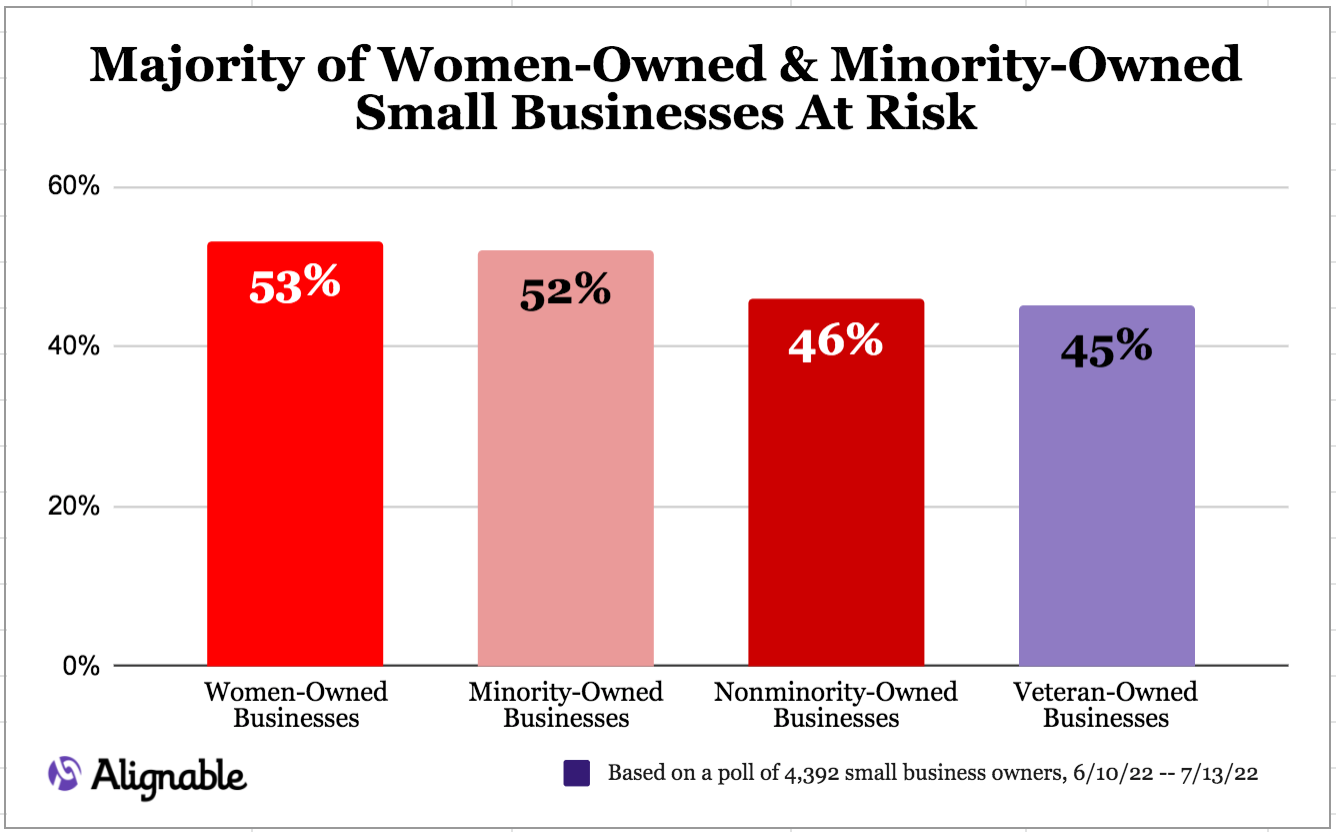 Alignable also revealed that the percentage of businesses that said they’d fully recovered profits to pre-covid levels in 2021 was higher (33%) than the figure who said the same this year (26%).

How Businesses are Fairing State by State

When the figures are broken down to individual states, there’s a gulf between how the average business is coping.

For example, over half of the small businesses in Colorado (54%) are in dire straits, making it the state with the most small businesses at risk. This is 13% points away from Georgia’s figure (41%) which is concerning enough in and of itself. 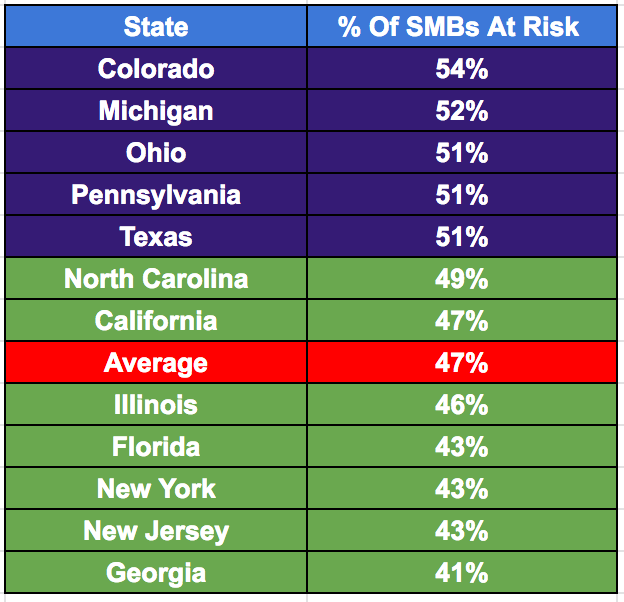 Other states where the majority of small businesses admitted they may be in jeopardy by the fall included Michigan (52%), Ohio, Pennsylvania, and Texas (all 51%).

In North Carolina and California, 49% of businesses are facing a doomsday scenario, whereas 46% of businesses in Illinois also fear a fatal blow is just around the corner.

On the east coast, in Florida, New York, and New Jersey, 43% of small businesses expect to be closed by fall.

Out of all the small businesses surveyed, the most likely to suggest they may be in dangerous trouble were retail businesses, with a huge 59% staring down the barrel of impending and permanent closure. 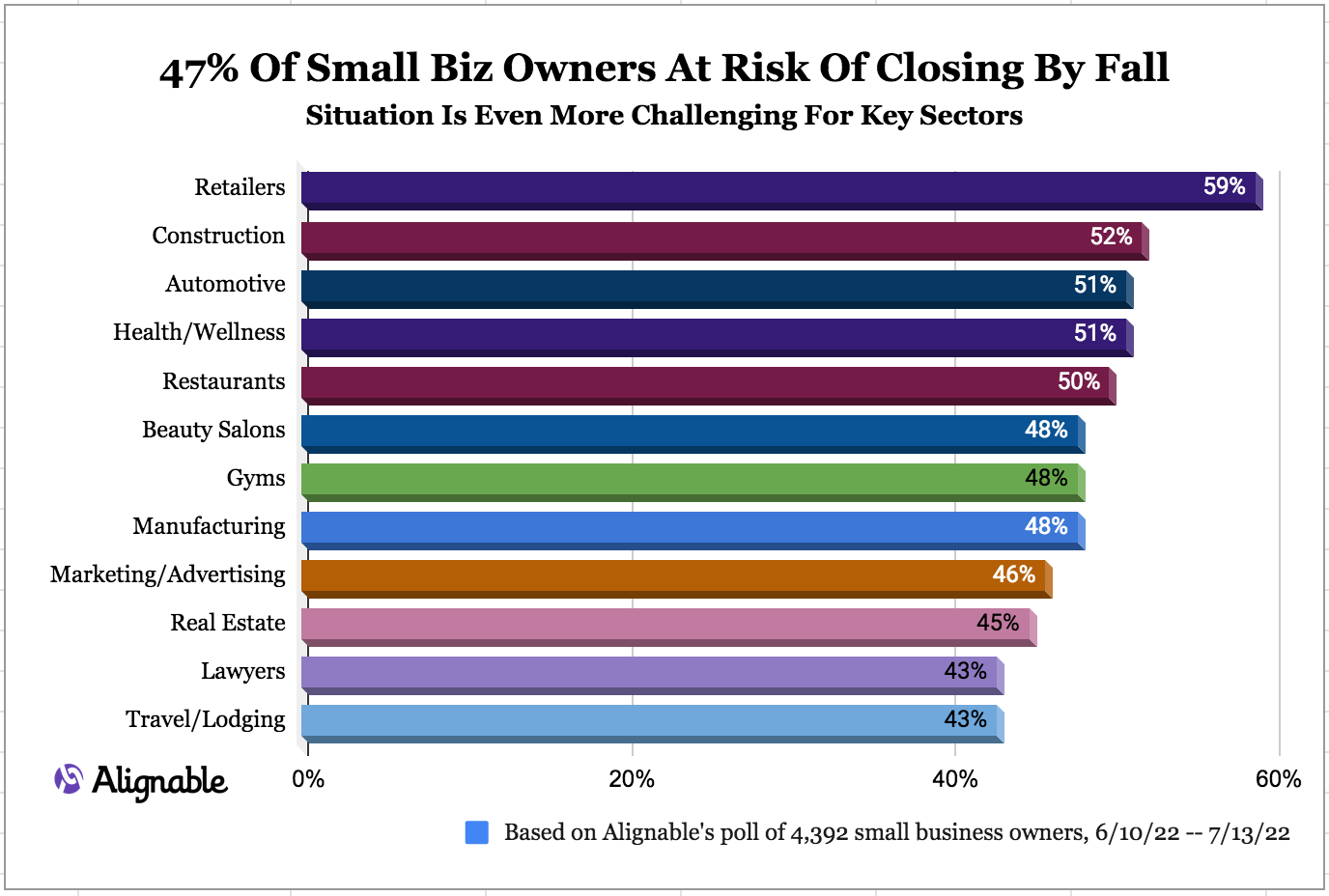 Half of all restaurants are in a similar position, with construction firms (51%), automotive companies (51%), and health/wellness companies (51%) joining the most at-risk industries at the top of the list.

Comments on the poll, according to Alignable, suggest that small businesses industries like advertising/marketing and legal “fear clients will reduce their spending, as their clients have less money due to inflation.”

Estate agents – 45% of which admit they likely won’t make enough to keep going, are struggling with “a lack of inventory to sell, as well as increasing interest rates.”

A Tough Year Ahead, Wherever Your Business Is Based

Although Covid seems firmly behind many states – as well as countries – rising inflation is making the current economic climate tough for small businesses in particular, and companies everywhere are having to make tougher and tougher decisions regarding everything from payroll to supply.

If you’re a retail business selling shippable goods, the likelihood is you already have an ecommerce website – but now is a better time than ever to start questioning whether you’re maximizing your revenue online, and whether there are marketing and SEO tools available, for instance, that can help you take your business to the next level.

If you’re still relying on one income stream from your brick-and-mortar store, then now’s the time to get your business set up online and immerse yourself in the world of ecommerce. The tougher it gets, the more necessary it’ll be to have multiple revenue streams and a larger, more accessible customer base.