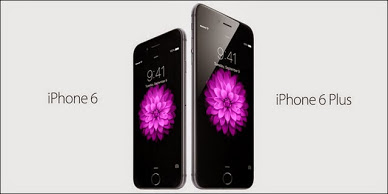 The world as we know it seemed to stop today as ravenous tech junkies watched Tim Cook's announcements at the Apple Event. After months of waiting, Apple has just announced the release of two new iPhones: the iPhone 6 and the iPhone 6 Plus. Prices for the iPhone 6 start at $199 for the 16GB  and at $299 for the iPhone 6 Plus. You can pre-order starting this Friday, September 12, and should ship on September 19. In addition, Apple unveiled Apple Pay, the company's approach to mobile payments, as well as confirmed rumors behind an Apple Watch.

“Today, we are launching the biggest advancement in the history of iPhone,” said Apple CEO Tim Cook on stage at today's Apple Event. 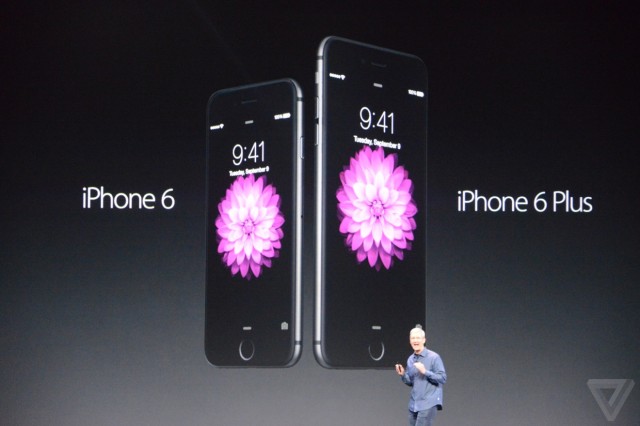 The new iPhone 6 and iPhone 6 Plus (via The Verge).

Both phones will feature an ion-strengthened glass front and an anodized aluminum back. The display is sRGB active and is in retina HD. The iPhone 6 features a 4.7-inch display, while the iPhone 6 Plus features a larger 5.5-inch display. Both phones will be thinner than the current 5S and have 38 percent more pixels and 185 percent more respectively than the 5S. The new iPhones run on Apple's A8, 64-bit chip, making it's CPU operate 20 percent faster and increase graphics by 50 percent. They also include the M8 “motion coprocessor”, which enables the iPhone to make distinctions between movements such as cycle and running, on top of calculating distance and elevation.

Additional features for the new phones include the relocation of the power button to the side, a new “reachability” gesture where users can double-tap the home button to slide the whole display and access the top buttons, and the functionality of a horizontally-enabled homescreen (finally). Both also feature much more advanced cameras, much improved batter lives, and the highly anticipated iOS 8 (which Apple plans to release on September 17th).

Apple also announced Apple Pay – the company's solution to mobile payments. According to Cook, previous attempts at mobile payment solutions were created out of self interest rather than the actual user experience. Apple Pay store your payment information simply on your phone using a one-time payment number and dynamic security code – simply add your debit and credit card information and that somehow stores your billing information without further use of your actual card numbers. If your iPhone is ever lost, you can simply suspend all payments using your iPhone's Find my iPhone service. Through Apple Pay, you're essentially awarded with the ability for one-touch checkout without the risk of having your personal information stolen from you. 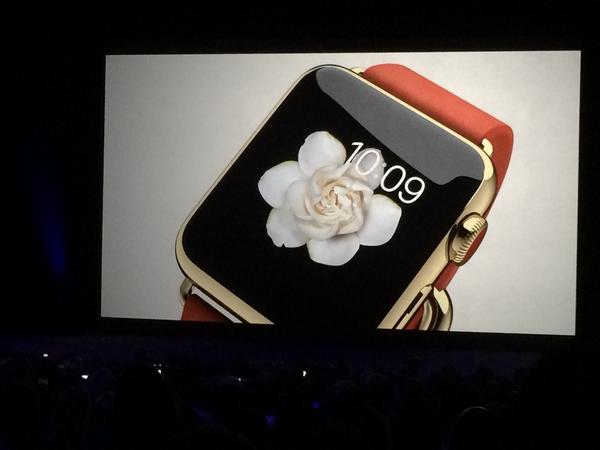 The Apple Watch! (via Twitter/Danny Sullivan)

“An entirely new product,” said Cook. “We believe this product will redefine what people expect from its category.”

Saving the best for last, Cook announced the Apple Watch, which is looking to be the crème de la crème of wearable devices. Compared to other smart watches currently on the market, the Apple Watch. What's notable is that Apple didn't just shrink the iPhone current user interface and squeeze it on the watch's screen; rather, one of the primary tools on the watch is the “digital crown” which serves as the Apple Watch's primary interface controller. It features a touch screen covered in a sapphire display that can actually tell the difference between a tap and a press. You can use voice dictation to reply to messages and utilizes wireless charging.

The Apple Watch won't be available until early 2015. Those wanting to get their hands on it should already own an iPhone device (from the iPhone 5 to iPhone 6) and be prepared to fork over $349 at the cheapest price. Apple Watch comes in two sizes, offers multiple options for casing, and even more so for straps – giving consumers a wide range of choice (a first for any Apple product); according to the Apple announcement, it will come in three editions: Apple Watch, Apple Watch Sport, and Apple Watch Edition.

There was much anticipation for today's Apple announcement, especially after the company itself conveyed that the announcement would be “historic”. And things certainly got even more exciting last week when it was discovered that Apple had booked a space much larger than for previous announcements, adding to the hysteria of Apple fanboys/girls already lined up for the company's new devices. Since announcing the plans for the iPhone 6 and the possibility of an iWatch (or some other wearable device), consumers have kept a close eye on the company, while technologists and engineers attempted to predict the new features that would be incorporated into the new devices.

For months, there have been many expectations for the iPhone 6, including two different-sized models (one 4.7-inch and a larger 5.5-inch), NFC wireless connectivity (which has been incorporated in many Android phones for quite some time), a sapphire glass display, and a more contoured design. Today, we can confirm that many of these features have taken into play.

Apple's revelation of its Apple Watch, however, can be argued to be more of a pivotal moment for the company, which experienced a slight decrease in popularity and sales since its most recent introduction of the iPhone 5S and 5C into the mobile market. At a time when the future of wearables is yet to be determined, Apple's ingress into this nascent market could potentially affect it in ways similar to the way the first iPhone revolutionized smart phones in 2007 or the iPod for digital music players in 2001. Not only has Apple created a wearable device with features that beat others currently on the market and adding further utility to a classic human device, they've launched a product that speaks to the role that watches play in today's modern ethos: a fashion statement. It has not only launched a groundbreaking new device, but one that allows consumers to continue wearing watches as a style piece.

It's too early to tell, of course, whether any of the new devices revealed today will have any longstanding effects on the consumer market, but one thing's for sure: now that Apple's in the wearables market, you better believe that more competitors will enter this space.

Tell us: What were your impressions of the Apple Event?