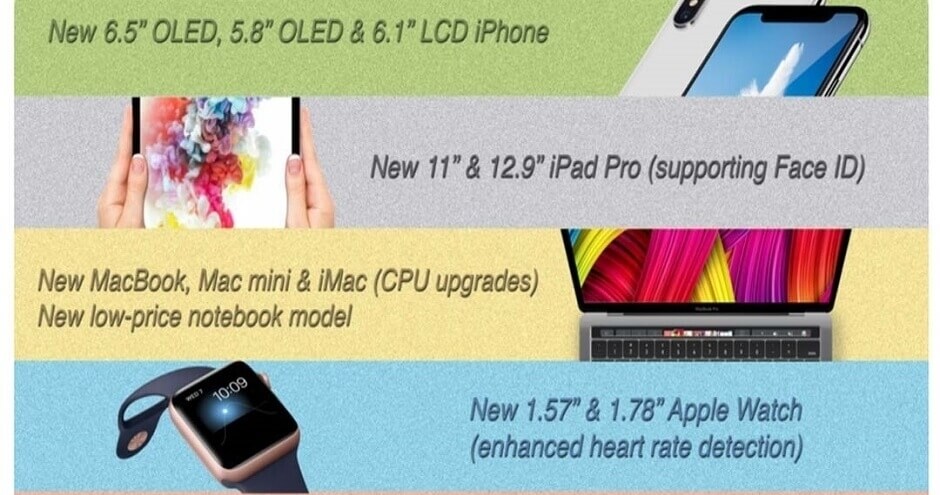 It’s Apple rumor season again (although really, when is it not?), and in the run up to its annual September showcase, there has been a mother lode of information dropped about the tech giant’s latest line up, courtesy of Apple analyst Ming-Chi Kou. If the reports are accurate, we can expect an update across most of Apple’s ranges within the next few months.

Kou, working on behalf of TF International Securities, published a report for investors on potential reveals at the next big Apple event, and suggested new additions to the iPad, Apple Watch, and Mac line-ups, as well as an update on AirPower, the wireless charging pad.

While Apple rumors are nothing new, it’s particularly interesting that these are coming from Kou, who has deservedly earned the title in some circles as ‘The World’s Most Accurate Apple Analyst’. He has a strong track record spanning years of being on the money, so these predictions should prove fairly robust. Let’s take a look at them.

Additions to the iPad Range

It’s not been that long since Apple refreshed its iPad range – the standard model got a revamp in March of this year, but we’re looking at just over a year since we’ve had a new iPad Pro model, so it’s perhaps not too surprising to learn that Apple is apparently intending to introduce some newer tablets to this line up.

What is a little strange is that it’s claimed one of the newest additions will have an 11-inch screen, which would place it in between the current 10.5-inch and 12.9-inch Pro models. A new 12.9-inch iPad pro is also apparently on the cards, which implies that the 11-inch version may be Apple bumping up the size of the smaller 10.5-inch Pro a little. Depending on what they’ve managed to do with the bezel, it could potentially fit in the same case and be the same dimensions.

Apple is also said to be introducing Face ID, taking one of the iPhone X’s most impressive party tricks and implementing it on tablets. That’s not the only design choice that the Pro will supposedly take from the iPhone X either– that iconic Home button is also out, according to rumours.

For iPad Mini fans it’s sad news – there’s no update to these diminutive slabs, which have gone unloved by Apple since the Mini 4 in 2015.

The latest rumors complement the other leaks we’ve heard so far about the new iPhone range – namely that we can expect three models, and that Apple will be making its biggest iPhone yet.

Coming in at 6.5-inches, one of the models will be significantly larger than the current 5.8-inch iPhone X. Based on information from Geekbench, we know that this massive mystery phone is also looking to be Apple’s most powerful too, and right now the safe money is on an iPhone X Plus.

There are also suggestions of a 5.8-inch OLED model, which could potentially be a successor to the iPhone X, and a 6.1-inch LCD model. What’s more, there are strong signals that the Home button could be ditched for the entire iPhone range going forward, instead relying on Face ID to unlock.

This one almost goes without saying, but yes, there will apparently be new Macs on offer, including additions to the MacBook, iMac and Mac Mini ranges. These are likely to come in the shape of simple CPU updates rather than anything too radical, although there is a suggestion that among these models will be a low-cost notebook. What low-cost means to Apple is anyone’s guess, but it’s good to hear that it wants to make its products more accessible to consumers of varying budgets, echoing Microsoft’s reveal of the cheap Microsoft Surface earlier this week.

The return of the Mac Mini is bound to raise a few eyebrows, as the last time it got an outing was way back in 2014 (if you need reminding, that was the year that Gwyneth Paltrow and Chris Martin had a ‘conscious uncoupling’, and Shia LeBouf put a bag on his head – yes, it was a lifetime ago). However, the Mini has its fans, some of whom must be clamouring for an updated processor at this point. It looks like 2018 could well be their year.

The rumors suggest that we can expect not one, but two new Apple watches, measuring 1.57-inches and 1.78-inches. This means that they’re getting a slight size increase over the current models, but will still be an acceptable size for a watch. They should also apparently feature enhanced heart rate detection, which is good news for gym rats who need to keep tabs on their performance at all times.

Then there’s the AirPods, Apple’s wireless headphones range, with the implication being that Siri functionality will be added to the new model, which isn’t too much of a leap to imagine. There have previously been rumors that the next range will be waterproof, but that remains to be seen.

Last but not least, the Airpower should finally be seeing the light of day. We’ve known about the AirPower, Apple’s wireless charging mat, for some time now, since it was announced at the September 2017 Apple event, but it’s been curiously quiet since then. Designed to charge several products at once, and supposedly compatible with iPhones, Apple Watches and AirPods, it could be the perfect accessory for Apple fanatics who have to plug in several products each night. Not only that, but Apple originally stated it would meet the Qi charging standard, meaning that potentially it could be compatible with non-Apple products too.

While the delay in consumer availability points to some potential issues behind the scenes, the suggestion from the latest rumors is that it is now very much imminent.

We’ll have to wait until Apple’s September event to find out how many of these rumors pan out, but as of right now, they’re the closest indication we have of what the tech giant is cooking up behind the scenes.