As you’ve probably heard, we’re on the cusp of another all-singing Apple event, which means that excitement, and speculation, is at fever pitch among Apple enthusiasts.

While we know for a fact that Apple will be launching a new lineup of new iPhones and a new Apple Watch, might we see even more hardware at the event? Perhaps some fancy new MacBooks?

We take a look at which of Apple's MacBooks are most due an imminent update, and what we expect to hear from Apple at its event on 12 September next week.

Can't wait for next week? See our guide – Which MacBook Should You Buy?

Will Apple Reveal a New MacBook?

Probably not – Since being re-introduced by Apple in 2015, the 12-inch MacBook has had a refresh every year. Going by that pattern, it’s perhaps overdue an update, but next week may not be the time for it.

The 12-inch MacBook – Apple's thinnest, lightest laptop – was updated over a year ago. That's almost prehistoric in Apple terms, given how often the iPhone line gets a refresh.

So, will we see an update next week? The timing wouldn’t necessarily fit, given that the updates have come in April and June before, making a September refresh of the range out of the ordinary. But, with the MacBook Pro range recently updated, the MacBook is starting to look a little left out.

With the Air range somewhat neglected too, Apple needs to inject some freshness into its laptops outside the MacBook Pro range, so the smart money would definitely be on an updated MacBook.

Depending on the fate of the Air (more on this below), we could see a bigger MacBook, perhaps a 15-inch model to complement the existing 12-inch MacBook.

Will Apple Mothball the MacBook Air?

Surely? – The MacBook Air is in a slightly odd place at the moment. It's effectively a legacy product that feels like it's been hanging around a bit too long.

Apple ditched the 11-inch Air model in 2016 – a shame, given this was the closest Apple had to a “cheap” entry-level laptop. The 13-inch Air model seems somewhat redundant in light of the even thinner 12-inch MacBook, which is also more powerful and lighter.

All of its party tricks that Apple boasted about at Air's original launch (remember the commercials of it being slipped into an envelope?) have long since been adopted by the MacBook. The poor old Air doesn’t even have Apple’s super-sharp Retina screen.

If there’s one issue with getting rid of the Air entirely, though, it’s that there would be no 13-inch model MacBook at a reasonable price point. Although of course, a larger MacBook would resolve this issue…

Will Apple Unveil a Cheap MacBook?

Possibly – “Cheap” and “Apple” rarely go together in the tech world. Part of the company’s appeal is its high status, reassuringly expensive electronics.

While we’ve seen Apple make ‘cheaper’ options for iPad and iPhone users (again, that’s a relative term when it comes to Apple), it’s worth noting that these mobile devices are a slightly different prospect to a laptop. They’re also a great advertisement for Apple and its infrastructure.

How many people do you know who have picked up an Apple phone, loved the ecosystem, and subsequently nabbed a MacBook too? In some ways, the iPhone and iPad are great advertisements for the main event – buying a MacBook.

There may be a ‘cheaper’ MacBook unveiled, but don't expect it to cost pocket-change.

Will Apple Launch a Touchscreen MacBook?

Don't bet on it – Apple has resisted the urge to provide a touchscreen MacBook so far. This puts it at odds with Microsoft Surface and Lenovo Yoga Windows laptops, for example. Rather than leading the field, Apple is bucking the trend when all around are offering 2-in-1 laptop/tablet hybrids.

It’s not just the high-end laptops that offer this functionality either. A lot of entry level, $300 units have touchscreens, too (although with somewhat limited success).

So, will we see a touchscreen MacBook? Chances are, no. Apple doesn’t seem too interested in diluting its offering by making the choice between a MacBook or an iPad more confusing. If your MacBook can double as a tablet, do people still need to buy an iPad? Most other laptop manufacturers don’t have to worry about cannibalising tablet sales in this way.

Apple has been introducing touch features on laptops – just not on the screen. The MacBook Pro’s Touch Bar is very much pitched by Apple as a premium feature, but there’s a good chance we could see this trickle down into other ranges. It’s not too hard to imagine it being introduced to the high end 12-inch MacBook, for example. 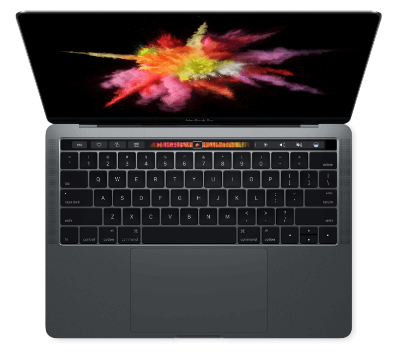 Will We See a New MacBook Pro?

On this question, the magic eightball says….’not likely’.

The MacBook Pro range received an upgrade in July this year, packing in faster processors and a few other goodies, so it seems somewhat unlikely that Apple would then unveil even newer models a few months later. We’re not saying that people wouldn’t rush out to buy them, but it would make the July models pretty much redundant overnight.

Following the pattern of the past couple of years, the MacBook Pro has had an upgrade in the summer, but nothing at the September event. We’d expect the same here.

Will there be a New Mac Pro or iMac?

Possibly – The iMac range last had an update in June 2017, although the changes have mainly been internal. The actual design has remained pretty much unchanged since 2012. While the iMac is still iconic, some might argue it's been a while since its last facelift.

With the last iMac launching in July 2017, the range is due an update, so expectations are high for the September Apple event.

As for a new Mac Pro, we know this is coming already. Apple has stated that it will drop in 2019, and that the iMac Pro, released at the end of 2017, acted as a stopgap in the interim.

It seems unlikely that we’ll get a first glance of the Mac Pro at the September event, but rest assured it's on its way.