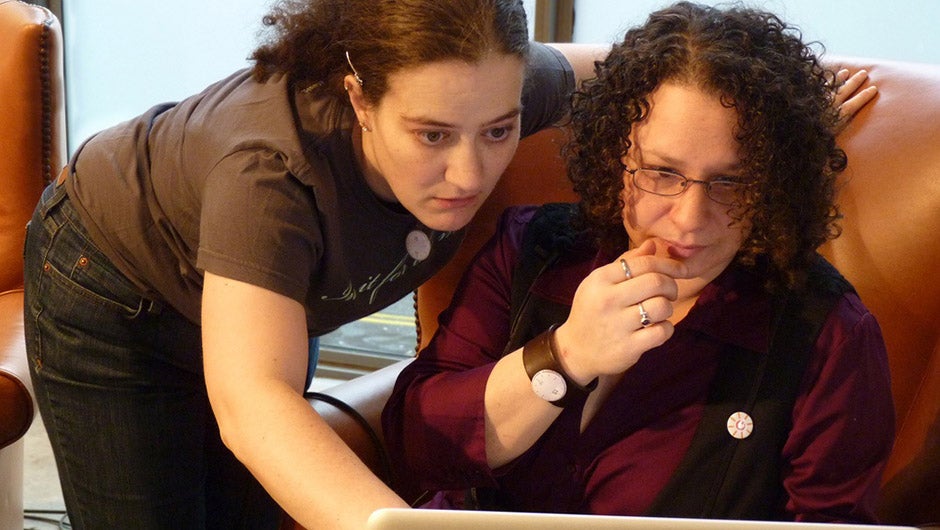 Have you ever been at work and gotten the dreaded phone call from your mother? The one that starts with: “Are you at your computer?” Of course you’re not. You’re in the middle of your cardio routine during your lunch break – which she knew because she knows your routine like the back of her hand.

However, she’s in crisis mode, so all that goes out the window, and she’s focused on one thing: her Mac isn’t doing what she wants it to, and it doesn’t matter that when you’re at work, you use Windows. You are your parents’ tech support, and you are on-call 24/7.

Your mom, however, is no dummy. She’s raised a family of well-educated free thinkers who obviously know how to use technology well.

Digital immigrants like you and Mom have a learning curve — hence her need to call at inconvenient times to ask you about why she got an email from you when really she received a Facebook notification. But mobile apps and the rest of the digital world are the future, and you and mom have to get with the program — it’s only going to help in the long run.

They Gained Their Freedom, What About Us?

Using Facebook and other technologies has likely given Mom a greater degree of freedom than she had before the technologies were developed. Mom is now connected to her grandkids — if she has them, especially if they happen to live in another city or state. Her health is likely better, and she can live at home longer than she would have before.

All this tech may be great for the freedom of our parents, but it can sometimes mean we feel like we’re once again joined at the hip with our parents — at least technically.

Have you — like I have — received the phone call at 10:30, y’know, bedtime, wanting to know how to group text you and your siblings because Mom wants to have a family dinner at the last minute? Tomorrow night? How do you react to that?

It doesn’t just take patience from you to deal with the constant calls and texts. I still have to remind my mother how to shut off apps on her iPhone 4, and she’s had it for more than the normal cycle of two years and has asked me this question more than four times. Baby boomers technology use takes patience.

Curtis Silver of Tech Northwest pointed out that it isn’t lack of knowledge or intelligence that keeps Baby Boomers from learning technology. It’s mostly the fact that technology doesn’t meet the expectations they have for it. My mother’s most frequent refrain is: “Can’t you tell me now?” No, Mom, I’m at the gym, sweating like a pig, and my iMac is at home on my desk.

It also takes patience from you, because let’s face it, sometimes it’s your fault. I can’t help my mom install apps on that iPhone 4 because I set up her Apple ID, but neither of us can remember the password! That helps no one.

I’m nearly 40 years old, but I learned my lesson during tax season this year about updating my parents’ computer willy-nilly. My iMac is newer than theirs — I have no disc drive, so I went to their house to do my taxes. One problem: the tax software was too new for their OS, which likely hadn’t been updated since my mother bought the thing in 2010 (and asked the owner of the store if 1TB was enough memory!).

I updated the operating system but didn’t bother to check if all her software would be compatible. I was on a mission! It was just days from April 15! Oops. I received multiple frantic phone calls the next week about how her bookkeeping software now would not print checks, invoices, etc., and my dad needed to bill a well-known architect for an obscene amount of money.

This led to a string of heated phone calls and even a three-hour long wait with the real tech support for my mother. She was furious with me! She had every right to be. This kind of neglect was my fault — it leads to hurt feelings and lost money!

The Origin of the Shouting Match

It can also lead to a shouting match. Who really wants to get into one of those with a parent these days? Aren’t we past that? You are, aren’t you?

I once took a “tech support call” from my mother which lasted more than half an hour, and I can honestly say it devolved into a shouting match. I lived in an apartment at the time, and I can guarantee that the neighbors were highly amused — or frightened — by what they heard. Mom and I, on the other hand?  We both actually shouted at each other: “Why are we even fighting anymore?!”

Thankfully, that dissolved the tension, and we burst out laughing. Thus, hurt feelings were forgotten about — as was the question — and we moved on to something else. Don’t forget to have a sense of humor about this kind of stuff, and remind Mom and Dad as well. After all, it’s just a phone.

Tech for Baby Boomers isn’t just about giving them freedom or improving their health. As Jon Stein reminds us, marketing technology strictly for Baby Boomers can be insulting. Boomers aren’t stupid, and they aren’t decrepit.

They just want to have fun and stay connected — like the rest of us. Some of us use more than one device for the same connectivity — an iPad, iPhone, and an iMac synced for school and social media, like I do. My mom uses Facebook on her iMac. My dad watched YouTube on his iPad (first gen, by the way). Mom texts my sisters and me on her phone. That’s the extent of it for my parents.

But even my dad and his clamshell phone are techier than I thought.

Dad (at the end of a conversation): “I’m gonna push this here red button.”

Me: “That old thing doesn’t have a red button!”