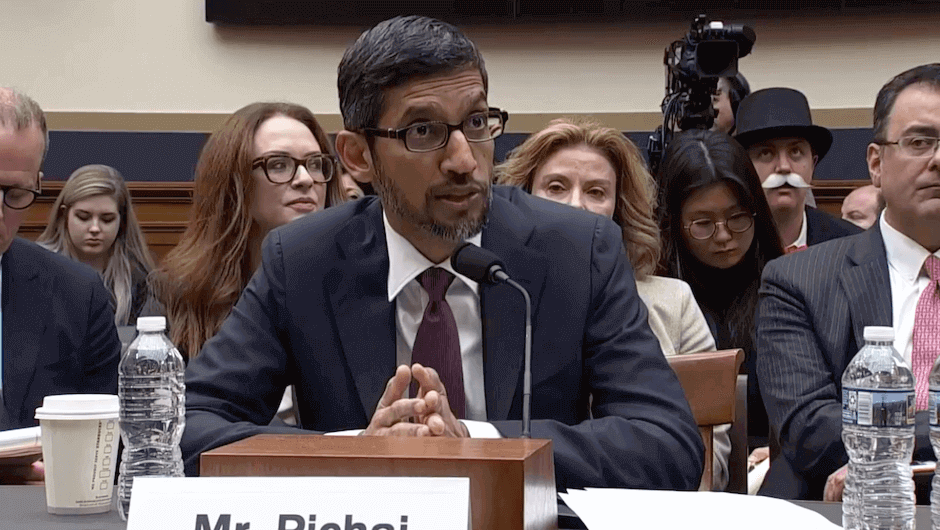 Today, Google CEO and Chairman Sundar Pichai testified before the House Judiciary Committee in response to confirmed security breaches and perceived political bias throughout their platforms. And the proceedings seemed oddly familiar.

Much like Mark Zuckerberg's appearance before Congress, this hearing was filled with a number of poignant questions about the future of the United States of America in regards to technology. Unfortunately, also like Mark Zuckerberg's appearance before Congress, there were also a lot of wildly oversimplified and misinformed questions that further demonstrated the growing knowledge gap between tech and politics.

Just because politicians are out of touch with the tech world though, doesn't mean Google shouldn't be under scrutiny. With shady data collection practices and a few notable security breaches in recent months making headline news, the tech giant needs to be held accountable for the influence they have on society from a political and security standpoint. But by the looks of some of these questions, someone else should be holding them accountable.

There were a lot of questions asked during this extensive hearing, so we've collected the best and worst of the field to give you a better idea of what happened during this hearing.

Bad Question: Why Does Donald Trump's Picture Come Up When I Google the Word “Idiot”?

This question, posed by Zoe Lofgren (D-CA) was asked, somewhat in jest, to help illustrate exactly how Google's search algorithm decides on which images, articles, or other content are put at the top of the search results. Here's the exact quote:

“Right now, if you google the word ‘idiot’ under images, a picture of Donald Trump comes up. I just did that. How would that happen?”

Even Pichai couldn't help but smile at the question, but the basics of the question are an important point worth visiting. While it may be perceived as political bias, Pichai explained that search results, including images, are not in anyway affected by human interaction and are simply following an algorithm.

“Any time you type in a keyword, as Google we have gone out and crawled and stored copies of billions of [websites’] pages in our index. And we take the keyword and match it against their pages and rank them based on over 200 signals — things like relevance, freshness, popularity, how other people are using it. And based on that, at any given time, we try to rank and find the best search results for that query.”

As House members bombarded Pichai with questions about political bias, he regularly came back to this explanation and for good reason. What many of them plainly couldn't understand was that this search process is almost entirely automated and no one person can influence the results with, let's say, their political opinion. Any perceived slight is merely the result of aggregate data compiled through an algorithm that, apparently, correlates the word “idiot” to pictures of President Donald Trump.

Good Question: Are Google's Financial Obligations Getting in the Way of Ethical Behavior?

This paraphrased question was posed by Robert GoodLatte, the Chair of House Judiciary Committee in the early moments of the hearing, and it's more than valid. The direct quote is as follows:

“Would Google or Youtube be willing to make changes in support of a healthier civic dialogue if doing so meant a drop in user engagement metrics?”

While Google is one of the most profitable companies in the history of business, Pichai insisted that a commitment to user happiness is the driving force behind their platform.

“Absolutely, we have always focused on long term goals towards user satisfaction, focusing on their knowledge and happiness, success and that's what we work hard to create. It is important platforms like YouTube are viable in the long run, it's in our natural incentive to do so.”

As a private company with a whole lot of political and societal power, Google's financial obligations certainly have the potential to make ethical practices far from a priority. However, Google has a history of not being evil (despite the recent change to their code of conduct), so we'll take Pichai's word for it… for now.

Bad Question: Is Google Tracking My Every Move, Yes or No?

Ted Poe (R-TX) asked this perfectly reasonable, albeit oversimplified, question with the aggressiveness and intensity of a police interrogator. For the exact quote, filled with combative quips and snide remarks, see below:

“I have an iPhone, and if I move from here and go over there and sit with my Democrat friends, which will make them real nervous, does Google track my movement? It's either ‘yes' or ‘no.' It's not a trick question, you know you make $100 million a year, you ought to be able to answer that question.”

In the face of this high-volume, yell-heavy question, Pichai did his best to explain that a simple “yes” or “no” doesn't really apply to the technology world, particularly when it comes to an individual device.

“Not by default, but you may have a Google service which you've opted in to use. I can't say without knowing more details, sir.”

Poe had a great question that was posed in a terrible way. Rather than engage Pichai on the extent to which GPS tracking plays a part in the use of specific devices, Poe furiously and aggressively posed the same oversimplified question over and over again in what seemed like nothing more than a political grandstand. If only we could've heard Pichai speak on the subject for more than five seconds before being interrupted. Maybe at the next hearing?

Posed by Hank Johnson (D-GA), this question got to the crux of what many believe is the driving force of these tech hearings: transparency, or rather, a lack thereof. As his time expired, Johnson threw the loaded question at Pichai in hopes of spurring a meaningful discussion. The quote:

“Do you believe Google has done enough to be transparent in its data collecting policies?”

As Johnson surely knew, the phrase “transparent enough” left the door open for some interpretation. Pichai recognized that and responded appropriately by saying that the job of tech companies in regards to transparency is never done.

“We always think there is more to do, and it will be an ongoing area of effort for us.  But we've invested a lot of the years, and we make it very transparent as possible, encouraging users to check it out for themselves. But we are going to continue and invest more in the issue.”

Transparency in tech is a hot button issue, and the iterations across the industry are varied to say the least. Google has complied with the basest level of transparency, by providing reports about security breaches of their social media platform Google+, but with a company like Google, there's always more they could be doing. And hopefully, that's their actual plan.

Bad Question: Why Don't My MSNBC Interviews Show Up on Google News?

With colleagues laughing at the question in the foreground of the livestream, Steve Cohen (D-TN) basically asked why he wasn't featured more prominently in the Google News section for his appearances on MSNBC recently. His exact quote:

“This weekend, I was on MSNBC four times, and yet the first thing that comes up [when I search for myself on Google] is the Daily Caller, not exactly a liberal, well-known group, then it's Roll Call, then Breitbart news, then the Memphis Business Journal, then Breitbart news, then Breitbart. It looks like you are overly using conservative news organizations on your news and I'd like you to look into the overuse of conservative news organizations to put on liberal people's news on Google. And if you'd let me know about that, I'd appreciate it.”

Pichai was noticeably taken aback after the question, and not just because of the decidedly confusing way in which it was posed. Having just moments before fielded questions about political bias in regards to the lack of conservative news sources on Google, Pichai was now being accused of promoting too many conservative news sources on Google. Fortunately, outside of a nearly unnoticeable smirk, Pichai kept his cool.

“We do get concerns across both sides of the aisle, I can assure you that we do this in a neutral way and we do this based on specific keywords and what reliable information we have to assess the request.”

Again, this was a good question posed in the strangest of ways. How Google organizes their news section is perhaps one of the more important topics brought up during this trial, and Cohen brought it up as disappointment in his own online presence. Additionally, the hilariously partisan approach of complaining about a lack of “stage time” for liberal and conservative news sources further demonstrated that we need more informed individuals participating in these hearings.

Good Question: Are Google's Terms of Service Too Long and Complicated?

This question was also posed by GoodLatte and touched on a topic that is very near and dear to the tech community: super long terms of service agreements. Check out the exact quote here and learn about how to understand terms of service here:

Do you think the average consumer understands that Google will collect this volume of detailed information when they click through the terms of service agreement in order to use the Android operating system?

The long terms of service problem has been a big one for more than just Google. Large tech companies have recently had to defend, change, and consolidate their privacy policies to be more inclusive of users, and Google has apparently been making progress.

“It's really important for us that average users are able to understand it… We remind users to do a privacy check up, we make it very obvious. In the last 28 days, 160 million users went to their account setting to clearly see what information we have.”

While companies like Google claim that users are “opting in” to have data collected, these contracts are typically longer than a good book and contain confusing language that even a law student would struggle with. Yes, Google claims they're doing what they can to encourage people to read through their terms of service, but the reality is that no one is going to sit down and read something this convoluted, no matter how many reminders per month they get.