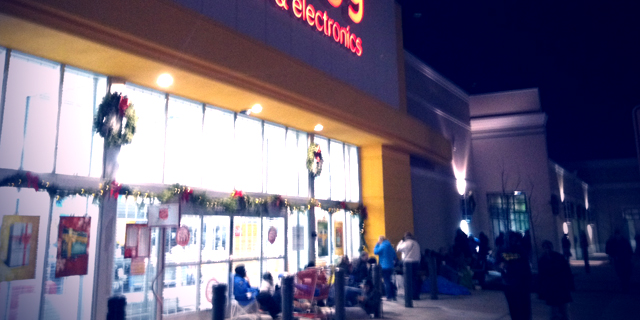 Yes, I admit it: I am one of those people that stand in long lines in the middle of the night to look for the best Black Friday tech deals.  I have done this for years, and consider it to be part tradition and part competitive sport. For those of you familiar with Black Friday, you will understand it is common to be in line for hours on end…sometimes in the cold.

This year was no different, although I noticed LOTS of people using smartphone devices like iPhones and Droids while waiting in line.  While it’s no secret that penetration of smartphones is growing with consumers, Black Friday shoppers are increasingly sharing real-time information via social media sites like Facebook and Twitter, as well as checking apps for the best places to shop.  Consumers are much more informed.

While waiting in line yesterday evening, I was frankly shocked by the volume of social media updates via sites like Twitter regarding Black Friday.  They added a new dimension to the Black Friday experience and helped keep me informed on what was going on.

During my visits to Target, Walmart, and Best Buy, I had the opportunity to take random samples of several hundred tweets using the tag #BlackFriday.  I then performed statistical modeling using a tool called SPPS.  I thought you might enjoy some of these “tag clouds” and get an idea of what some of the people are sharing using social media while standing in line.

No doubt traditions like waiting in lines for hot tech deals will continue for years to come; however, it will be interesting to see what role mobility will play in helping businesses and consumers in years to come.   For those of you out shopping today, don’t forget to bring your mobile phone!

Guest writer Glenn Allison is a technology professional in the Midwest with over 15 years’ experience building and managing global communications infrastructure.  He is a recent MBA grad from the University of Chicago, and occasionally writes about technology and business.  You can learn more by following his blog at: glennallison.org or follow him on Twitter: @GlennAllison.