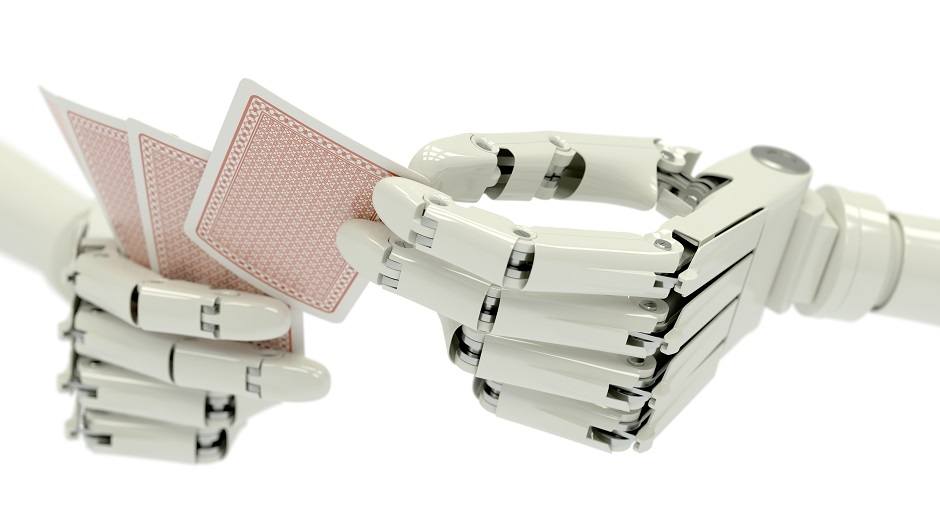 For the first time, an artificial intelligence system has beaten a team of professional poker players in a game of six-player no-limit Texas hold 'em. It's the latest and greatest example yet of AI-powered bots excelling at games that once belonged entirely to humans.

To be clear, it didn't just win once: The AI, named Pluribus, played 10,000 hands of the popular poker game across 12 days and 13 different opponents, all professionals. In some scenarios, it played five humans and in others, one human went up against five versions of Pluribus.

The AI, which was created by Carnegie Mellon University researchers working with Facebook’s AI initiative, prevailed to win an average of $1,000 an hour, or $5 per hand.

How Did It Do It?

Like many AIs, the program practiced against itself, examining its own past moves and calculating the likelihood of succeeding in the future. One interesting tidbit: The ability to properly randomize its actions gave the AI a big edge over its human competitors, according to one pro player.

“Its major strength is its ability to use mixed strategies,” poker champion Darren Elias, who played 5,000 rounds against the AI, told Inquirer.net. “That’s the same thing that humans try to do. It’s a matter of execution for humans — to do this in a perfectly random way and to do so consistently. Most people just can’t.”

Sometimes Pluribus opted for counterintuitive strategies, as well, such as displaying a penchant for “donk betting,” a move that's typically considered poor practice.

It was in 2015 that an AI from a project led by computer scientist Michael Bowling of the University of Alberta in Edmonton, Canada, first learned to reliably beat humans at a two-player version of Texas hold 'em, Science reported. And, in January 2017, an early iteration of Pluribus named Libratus was able to defeat four professionals at no-limit Texas hold ’em, though this was also solely in two-player games.

The Pluribus AI's six-player games represents another step forward in the slow, steady growth of AI abilities. It's also the final step needed to prove that AI can beat us all at poker:

“Developing a superhuman AI for multiplayer poker was a widely-recognized milestone in this area and the major remaining milestone in computer poker,” the researchers wrote in their ground-breaking paper.

Even accounting for its love of donk betting, Pluribus has gotten results. By beating six-player no-limit Texas hold 'em, it has smashed through the final AI computer poker barrier.

What's Next for Pluribus?

Professional poker has been hailed as the perfect example of game theory: It's a combination of skill and luck, and, over the long term, skill can come out on top.

Pluribus's ability to learn that skill highlights a few valuable AI growth areas, from the ability to deal with multiple human partners to the ability to handle the hidden variables and multiple outcomes created in a group dynamic.

These developing abilities could potentially pave the way for an AI that can act and react in real time with entire roomfuls of humans with competing agendas. In other words, we might get a high-functioning android receptionist that isn't just a publicity stunt.

And since Facebook is behind the tech powering Pluribus, that android receptionist could well be a Facebook-branded one.

Granted, AI still has a long way to go. Pluribus is great at “large-scale, complex multiplayer imperfect-information settings,” sure, but it's a far cry from I, Robot, and the line from Pluribus to an AI service worker is far from a straight one.