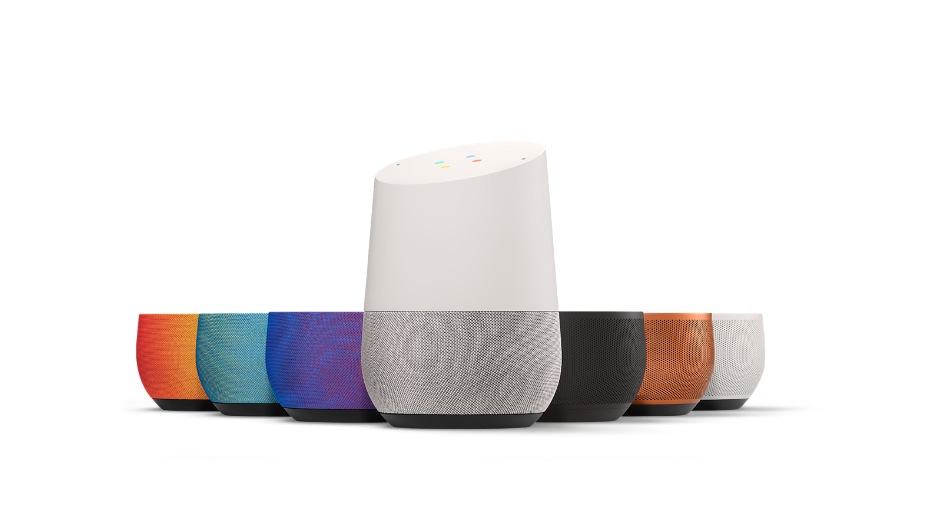 This week Google unveiled the future of hardware for the company, and with it they created a foundation of what we can expect in the future. With five new and updated pieces of hardware, from phones, to a smart hub, to a VR viewer, the overarching theme is that Google wants to create a polished, cross-device experience.

To tie everything together, Google also released details about the new Google Assistant, competitor to Apple’s Siri and Amazon Alexa, that will at least initially be available on the newest offerings. 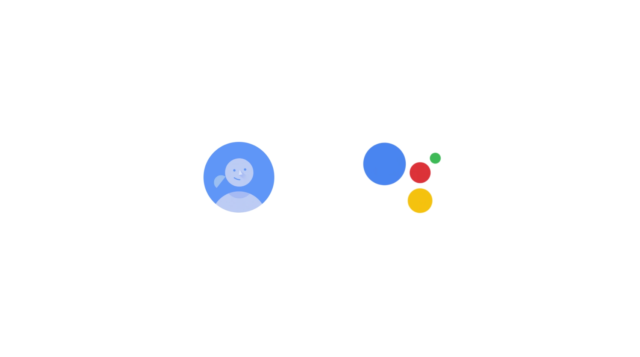 The world of IoT is notorious for continuously adding new, stand-alone devices that often struggle to communicate with one another. One of the biggest pieces of news from the Made With Google event is that Google Assistant will work across numerous devices, retaining the same voice activated experience.

The new software solution is a direct dig at Amazon Alexa, which currently only works on a limited number of devices and a small number of third-party hardware. Google Assistant is also powered by Google Knowledge Graph, which means in addition to similar functionality that you can get from Amazon Echo devices, you will also receive essentially the same results you would get in a web-based Google search, but in a conversational format. Until this is fully released in the wild, it will be hard to say how the two platforms compare. Apple’s Siri doesn’t really compete on either Amazon or Google’s level, but the company recently made the solution accessible to app developers.

Google has not yet announced in full what devices will support the new assistant; however, in their announcement video it’s clear it will be more than the newest hardware. In the video you can see a watch (smartwatch), a desktop screen, Google Home, a smartphone, and even a car. It’s also unclear if this will replace Google Now, which has a presence on both Android and iOS, but does not have a conversational response system or can be embedded within Android apps. 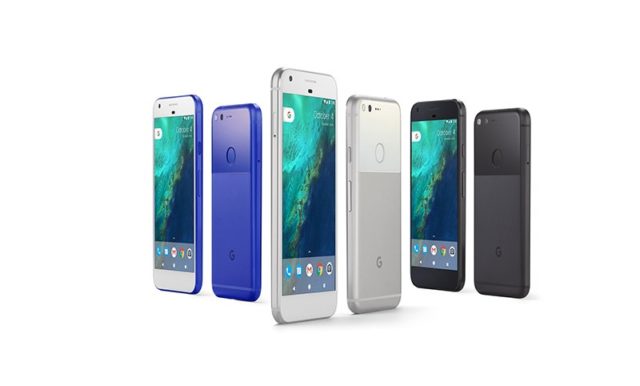 Google Nexus is dead, long live Nexus! Unfortunate alongside phasing the Nexus brand out, so did it’s affordable pricing for unlocked phones. In an effort to directly compete with Apple’s iPhone 7, both the Pixel and Pixel XL are priced to match. However, initial feedback from the announcement are mixed, with many feeling underwhelmed by the technical specs of each. Many were expecting wireless charging, dual speakers for stereo, larger bezels, and is not waterproof. Instead both Pixels will have Single bottom-firing speakers, a lack of wireless charging but does support fast charging or 7 hours worth of battery in 15 minutes.

On the flipside, according to DxOMark the Pixel’s back camera is the best yet for smartphones, ranking it an 89 out of 100. With 12.3MP on the back and 8MP on the front (selfie side), the Pixel can film 4K video at 30 frames per second. It will also sport both a USB Type-C and USB 3.0 port, and yes, even a 3.5mm headphone jack. They even made a very clear dig at Apple during their announcement spot.

As for the basics, Google's Pixel includes either a 5-inch 1080p display or 5.5-inch Quad HD panel. Although not mentioned during the announcement, HTC continued to support the development of the phone, powering it with the Snapdragon 821 processor, 4GB of RAM, and either 32GB or 128GB of storage. As is now the norm of Google, there will be a fingerprint sensor on the rear of the phone.

While the specs are comparable to the iPhone 7, Google is placing most of their differentiating bets on software. Announced alongside the Pixel will be a specialized version of Google’s Android software, which is designed to support the Daydream View headset and Google Assistant. Google is also enabling endless cloud storage at full video and image quality for those with the Pixel.

For the regular Pixel, pricing starts at $649 with 32GB of storage and $749 for 128GB. For Pixel XL, pricing starts at $769 and moves up to $869 for 128GB. Each phone will come in black or silver, with an exclusive really blue (that’s the official name) version only sold through Verizon. Pre-orders are open for both phones, with shipping expected to start on October 20. 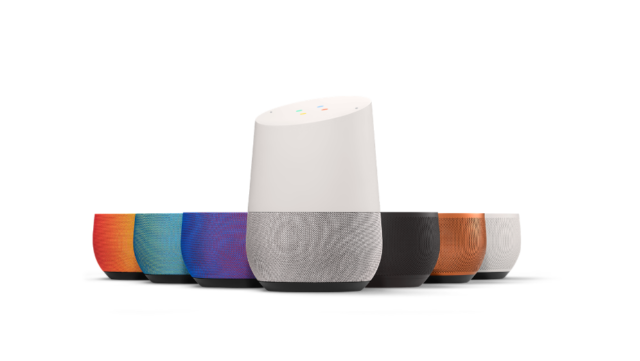 Google Home, announced earlier this year, is the company’s competing solution to the Amazon Echo lineup. Similar in nature to Echo, Home is designed to be a hub for all things internet connected, act as a virtual assistant, and create a seamless experience between devices that support Google Assistant.

Though initial feedback on the Pixel phones are underwhelming, the combined power of Google Assistant with Home hub are what really stood out at this week’s event. In addition to already having several big brands integrating with it, including IFTTT, Google Home will field questions, control household devices, play music, and allow you to interact with Google based apps (notes, calendar, etc.). By activating Home with the voice command, Ok Google, it will activate the device.

As for the design and interface, there is only one physical button on it and it will come in seven different base colors. For privacy, there is a mic mute button, but the other controls are managed through capacitive touch. The device also has a HI-FI supported speaker, and on the software side you can set a default for which music platform activates when speaking to it.

Google has also built software that ensures in a multi-device setup using Home hubs, only the closest one will respond. However, as Pixel also supports Google Assistant, they did not state how that will be handled if within the same area as Home. In the future Google plans on supporting multiple user accounts.

Home will ship on November 4 with pre-orders open now, and will cost $129 for a single unit or $299 for a three-pack. The initial offering also comes with six months of YouTube Red ($60). The pricing appears to be strategically under the larger Amazon Echo until ($179); however, later this month Amazon will release the $50 Amazon Dot.

This year one of the hottest selling gifts for the holidays will certainly be 4K TVs, Google is ensuring their Chromecast line can now fully support them with the Ultra. The new media streaming device will support up to 4K Ultra HD and HDR, and will do so with faster processing (up to 1.8 times faster). Ultra will also support an ethernet connection, whereas the regular version only supports wifi.

Chromecast Ultra is priced at $70 and is set to be released in November. The original Chromecast will still be available for $35. In comparison to other streaming solutions, Xiaomi also announced a 4K Mi Box this week, also priced at $70.

Similar to the Samsung Gear and countless other third-party headsets, Google released their own, fancy replacement for Google cardboard, Daydream View. Unlike cardboard, only specific smartphones, in particular the Pixel phones, will have suitable specs to make use of the viewer. Daydream View is a $79 viewer that allows you to consume 360 degree videos and imagery, watch movies in home theater mode, and play VR games.

The headset will come in three colors: snow, slate, and crimson, and is designed to be lightweight and comfortable. The real draw isn’t the headset itself though, but the included controller. By comparison, Samsung Gear supports a plethora of third-party controllers, but most are not really optimized for the experience. The Daydream View will include a Wii like controller that detects motion and direction.

Google’s Daydream View will be available in November, with pre-orders opening on October 20. Google is currently running a promotion to those who purchase the new Pixel phone in which they will receive a free Daydream View.

In a clear effort to improve the typically terrible setup and user experience of managing a home network, Google is releasing Google Wifi. Though designed for a home or location large enough to require access points or repeaters, Google Wifi will work using a mesh network. It’s also a system designed to easily expand, so if coverage in an area is weak, it’s as easy as adding another Google Wifi unit.

Google Wifi will support AC1200 wireless (current gen), and support for more widely supported 2.4 GHz and 5GHz networking types. Based on usage in a multi-device setup, the system will also automatically route more traffic to the closest unit to increase speeds. In addition to simplifying home networks, Google has also added parental controls that can lock kids out of accessing the internet using a pause button. Good luck with that, parents.

A single Google Wifi router will cost $129 with pre-orders starting in November, and a three-pack will be available for $299. Google Wifi will begin shipping in December.