Technology changes how we communicate, in more ways than one. From texting to social media, the evolution of smartphones, laptops, and other personal communication devices has dramatically altered the way we get in touch with one another. In fact, it's given way to a whole new language that is getting harder and harder to ignore as an actual language: emojis.

These tiny virtual images have gone from a pleasant novelty in digital communication to an entire lexicon with hidden definitions and double meanings- each subsequent generation making their own integration just a little more confusing for previous users.

In 2019, emojis are in the thick of our global conversations. Nearly half of all comments on Instagram contain emojis, and they've infiltrated courtrooms and office spaces on a number of occasions. To make matters even more complicated, the Anti-Defamation League has announced that the OK-hand symbol — which is also a popular emoji (👌) — has been dubbed a “sincere expression of white supremacy.” Subsequently, understanding the true meaning of emojis outside of their given context is more important than ever before.

Considering emojis have been around for nearly two decades, it's hard to know exactly what any specific emoji means from conversation to conversation. We've rounded up a few of the most commonly used emojis with the most unconventional connotations.

Yes, we're starting off with the most controversial emoji in your smartphone, the eggplant. While many may see this harmless purple vegetable as good source of vitamins to supplement your diet, the world of emojis has given it a dirtier turn, transforming the eggplant into nothing more than male genitalia. Suffice to say, it's best to keep this emoji off of your keyboard unless you're planning a vegetarian dinner for your romantic interest.

While you might assume the avocado emoji represents a millennial's favorite dish (avocado toast), it's a bit more complicated than that, although it does derive its hidden meaning from that delicious meal. The avocado emoji denotes something as “basic,” like pumpkin spice lattes or Ugg boots. And, tragically, if you don't know what basic means in this context, well, you're basic.

There's no denying the goat emoji is used often among the farming community, but it has a more common connotation that you'll likely see in the text conversations of avid sports fans. The goat emoji typically references the G.O.A.T. (greatest of all time) in a particular sport or even industry. Michael Jordan, Simone Biles, and Wayne Gretzky would be considered GOATs, which is why you'll typically see their names accompanying the cute animal emoji.

Sorry to get suggestive again, but you can't have a discussion about hidden emoji meanings without talking about the peach. As any eggplant connoisseurs can attest, the peach emoji is just as integral to the NSFW text lexicon as any fruit or vegetable on your keyboard. Typically denoting a butt, due to the curvaceous nature of the peach in question, this emoji should similarly be kept to yourself and your intimate relationships.

That's not all though. To further demonstrate the fluctuating nature of the emoji language, the peach emoji has taken on new life as shorthand for the impeachment inquiry into president Trump. However, while that iteration is certainly having its moment in the sun, most statistics show that the peach's number one use case is as the “butt” of the joke.

Apple, Google, and other emoji purveyors have stated that this emoji is the “dashing away” emoji, describing the cartoonish cloud of smoke left behind after a person has quickly evacuated. However, the online community has co-opted the emoji to denote a different, more popular-culture meaning in 2019: vaping. With potential bans around the corner though, this emoji could dash away before you know it.

Understanding the hidden meaning behind emojis may seem trivial to a casual observer. However, as the digital smiley faces and food-based images begin to infiltrate our everyday communications, the stakes of knowing what these emojis really mean get a lot higher. Then when you consider how lawyers rely on text communication to make their case in the courtroom, deciphering emojis gets even more important.

“Judges need to be aware of the importance of the emojis to the overall communication when we run into these odd evidentiary issues,” said Eric Goldman, a law professor at Santa Clara University. “We need to make sure that the emoji gets proper credit.”

Goldman couldn't be more right. Having spent years tracking all references to the words “emoji” or “emoticon” within court documents, Goldman understands that the official definitions of these emojis could have a dramatic effect on the lives of those embattled in legal disputes. Particularly when you consider the staggering rate at which these instances occur, it's safe to say emojis have become their own language that warrants a certain degree of attention. 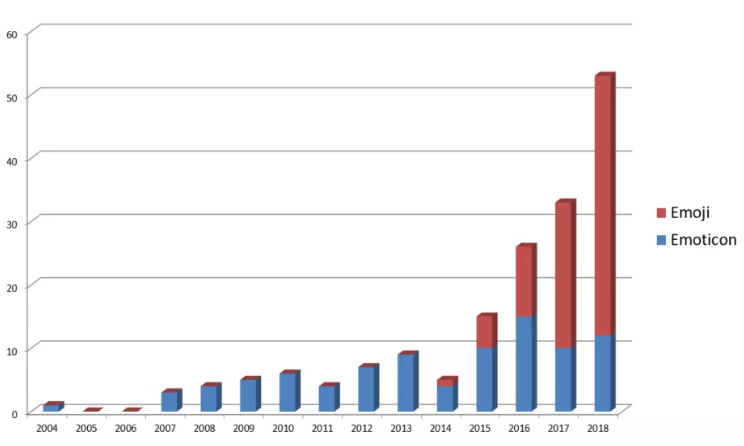 Emoji use in courtrooms since 2004, according to Goldman

Why Do We Use Emojis?

They might have seemed like a passing fad a few years ago, but it's clear now more than ever than emojis are here to stay. So what makes these tiny electronic images so attractive when it comes to communicating online? Because they replace what's missing from face-to-face conversations.

“Emojis allow us to imbue digital messages with the non-verbal cues inherent in face-to-face interaction: they allow us to signify the emotional context of a statement which would normally be conveyed in vocal tone, pose or gesture, rather than just the words themselves,” said Keith Broni, a bonafide emoji translator for Today Translations, to CNBC.

If you've ever misread a passive aggressive text or misinterpreted a sarcastic Facebook comment, you know exactly what Broni is referring to here. Tone and mood are impossible to convey over text, because simply put, you aren't there (in-person) to set the record straight. This has led to countless misunderstandings, arguments, and and disputes online, which could've been solved with the simple act of adding an emoji.

With an emoji, you can convey your happiness, your sadness, your sarcasm, your passive aggressiveness, and pretty much everything in between. These inconsequential images carry with them the full range of human emotion and then some, giving emotional prowess to a generation engulfed in the digital world of today. And if you don't learn what they mean now, you're going to have a hard time learning the language down the road.