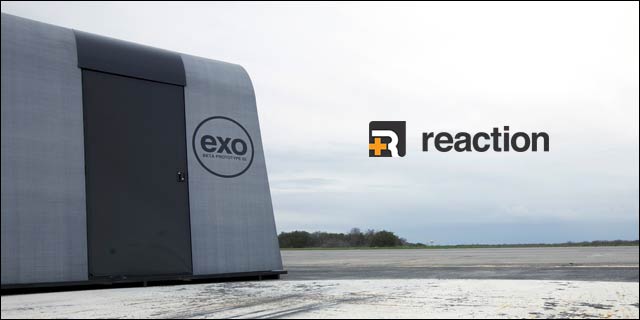 According to a housing survey published by the U.S. Census in 2011, more than 400,000 residents of New Orleans, La. were displaced as a result of Hurricane Katrina. And, while estimates vary, this number increases to 1,000,000 when you include residents from Gulfport, Miss.; Mobile, Ala.; and others. Setting aside the problem of long-term housing security (which is a separate but equally important issue), there was an overwhelming demand for emergency relief housing after Katrina hit the Gulf Coast in 2005; however, government response to the natural disaster left many without the basic shelter needs and, more importantly, many families disconnected. After nine years of design and development, Reaction‘s Exo disaster relief shelter hopes to prevent those issues from occurring after future natural disasters.

“Shelter is one of humanity's basic needs…but out of food, water, and shelter, it's the one thing that people have never really focused on,” said Reaction founder and CEO Michael McDaniel.

Reaction is a company that is focused on developing relief shelters for displaced residents in disaster zones. Their product, the Exo, hopes to forever alter the landscape of emergency housing relief. 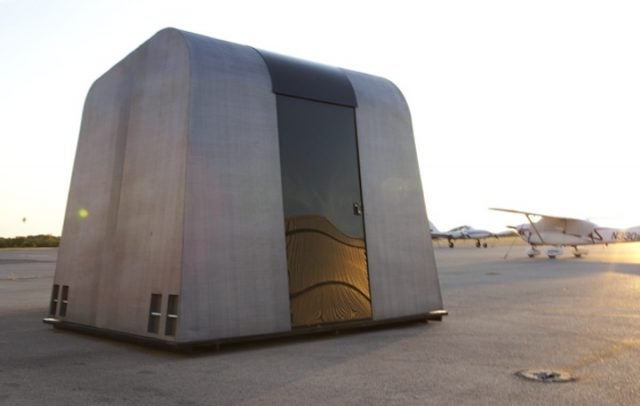 Reaction's Exo housing system has a sturdy, modular design that is modeled after an upside-down, styrofoam coffee cup.

Originally from Mississippi, McDaniel was deeply affected by the effects of Hurricane Katrina. What he found particularly frustrating was the emergency relief that was provided to all those people whose homes were destroyed in the storm. The government provided inadequate emergency housing and left many families separated. “It seemed like a massive problem,” said McDaniel. “Literally, people didn't know who was where and the relief housing just wasn't there…I decided from there that I wanted to design a solution for the people who ended up getting shipped out as a way of handling emergency response.” He wanted to find an alternative to the FEMA trailers that cost upwards of $65,000 to produce, can take three months to appear on-site, and weren't even sustainable in the long-run.

“I wanted to make a modern teepee. It's a caricature now, but through a serious design lens, [the teepee] is fantastically flexible and adaptable to the environment. [In creating the design for Exo], it needed to be highly affordable, could adapt to any environment, and had to be multipurpose.”

A former principal designer with renown design firm Frog, McDaniel began designing the Exo unit as a side project a few days after Hurricane Katrina. The tee-pee inspiration came to him after looking at a styrofoam coffee cup. “I wanted to design a rigid teepee-like structure that would flat-stack for easy transportation and storage, as well as highly insulated. What I came up with [for the Exo] was literally like an upside-down coffee cup with a lid.”

Each Exo “smart” unit provides 80 square feet of space and can sleep up to four people on single, fold-able beds. Powered by portable power generators, the Exo's low-voltage system allows each unit to power four power outlets, a weather radio, solid-state LED lighting, and a Nest-style AC system. The Exo is made up of a detachable base and a shell that makes up the walls and roof. Because of its detachable pieces and its lightweight but sturdy design, 20 Exo units can be stacked and shipped on one tractor trailer alone, and can be set up in a few minutes no necessary tools – this easily makes it a more viable and economical option for emergency relief shelter.

Disaster relief is in need of emergency housing that can provide people with essential needs after a natural disaster. According to a post by Elizabeth Ferris, the co-director for the Brookings-LSE Project on Internal Displacement, over 1.5 million were left homeless after the Haitian earthquakes (with over 400,000 still left displaced after two and a half years). Imagine the massive scale of relief something that Exo can provide for similar disasters in the future? It can change the fundamental ways governments around the world respond to natural devastations like Katrina and the Haitian earthquakes.

Since winning the smart cities category at the Challenge Cup Austin in January, Reaction has continued to  focus on actually getting to production, especially after having recently closed their seed round. Right now, they're rounding out two different alpha prototypes to make a product that can be mass-produced, aiming for a pre-production/beta model that can be tested by NGOs by the summertime. Most recently, Reaction has launched an Indiegogo campaign to help fund their Exo housing system through production. As for the Challenge Cup Global Finals, McDaniel expressed a lot of excitement:

“The Challenge Cup [Austin] was a fun experience for us. Being able to get to DC is a huge advantage for us. We have zero expectations for what's going to happen [at the Challenge Cup Global Finals], but it's exciting.”

The Challenge Cup is produced by 1776 in partnership with Tech Cocktail and iStrategyLabs.
Share this post
Did you find this article helpful? Click on one of the following buttons
We're so happy you liked! Get more delivered to your inbox just like it.