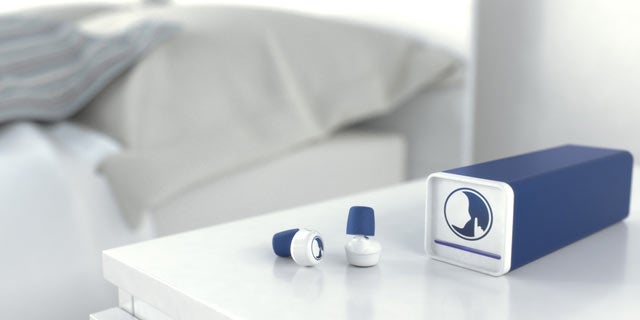 In the wake of Hush absolutely tearing their Kickstarter goal to shreds, I simply had to get in touch with the founder Daniel Lee to dig in. They successfully wrapped their Kickstarter campaign ($593,255 in total) and have embarked upon the next stage of their journey with the help of the local San Diego powerhouse incubator EvoNexus.

It all began for Lee back in college; he was a light sleeper and always had things going on around him like inconsiderate neighbors or loud roommates. The earplugs he used to sleep weren’t the best at keeping sound at bay, but more importantly, they left him with no peace of mind.

That is, Lee was filled to the brim with anxiety that he would sleep through his alarm clock thanks to these earplugs. As he turned this puzzle over in his mind, Lee thought of a brilliant solution: put a speaker on the inside of the earplug.

The Hush smart earplugs, the first of their kind, thus let you block out all the noise that keeps you up at night while letting you rest easy knowing that you’ll still be woken up by the things that matter most – like your alarm clock. But beyond that, Hush also gives users the ability to play ambient noises, filter smartphone notifications, and track your earplugs via Bluetooth.

It all goes through the smartphone, which Lee thinks is the perfect dashboard for Hush earplugs. These days most people route their entire lives through their smartphones.

Though there were times when Lee thought his idea would collapse at any moment; after all, if you can’t sleep in the headphones, he thought, they won’t work. But as little issues like ergonomics arose, Lee and his team systematically targeted each problem one by one and eliminated them.

And EvoNexus has been a huge help to them in alleviating these problems and launching Hush to where it is at the current date. Having a free office space has been beyond helpful.

But there’s something else inherent in EvoNexus that helps push Hush towards greatness, along with the other companies located in the incubator. I’m talking about the network of mentors that Hush has been able to consult with as a result of their affiliation with EvoNexus.

We’ve seen time and again the importance of solid mentorship. In Lee’s case, it’s helped them network with even more advisors and expand the boundaries of their support network.

“I think it’s good to have advisors. A lot of times when I’m freaking out I’ll be fixated on something that’s going wrong. I’ll blow it out of proportion,” says Lee. “Having somebody’s insight there is amazing. They can downplay things you’re irrationally freaking out over. Not to mention having a voice I can trust and respect that can dig into my thoughts to help me figure things out and give me perspective really helps ride those emotional highs and lows.”

Even though they dominated their Kickstarter, Hush still has a long road ahead of them. Kickstarter gave them a huge amount of people who want to help distribute the earplugs, but there’s still manufacturing to figure out as they plow forward.

To date Hush is the second most funded wearable on Kickstarter, so while the road might be long it certainly will have its rest areas for success. In the meantime Lee assures me he’ll keep hustling, getting people on board, and figuring out creative ways to build out the brand.