Two big internet researchers have dropped new studies within the past few days, and they both make the same point: Way more of us opt for our smartphones over desktop or laptops when getting on the internet.

In fact, a little over one-in-four lower-income adults in the US are smartphone-only internet users. The future has been mobile for years, but now we have a closer look at the people for whom the future is nothing but mobile.

Here's what that ramped up mobile internet traffic means for the future of broadband internet, ads, content, and your website.

First up was Bond Capital founder Mary Meeker, who debuted her annual and much anticipated state-of-the-Internet slide deck on Tuesday. Like a lot of the best studies, it mostly confirmed what we already suspected: That mobile traffic is continuing to rise, far surpassing the time we spend on desktop or laptop screens.

Time spent on desktop is both far lower and on a downward trend, having gone from 25% to 18% within the same time period. 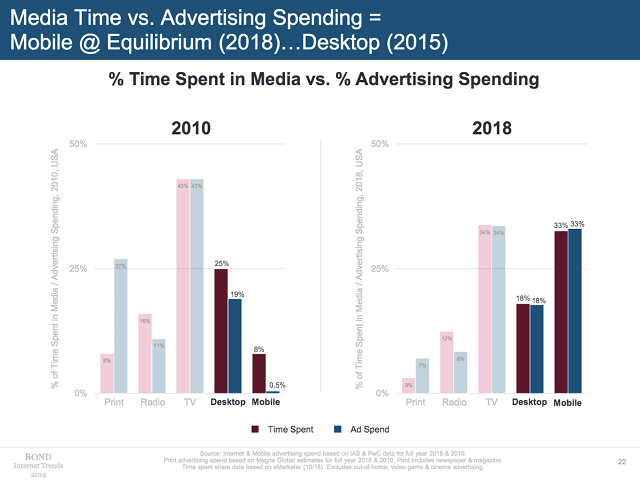 Meeker defines “desktop” to include media consumed on desktop and laptops as well, while “mobile” refers to media on phones and tablets, and the other slices of our media-attention pie were TV, radio, and print.

The other big research institution in question, Pew Research, just released a similar stat centered around US adults.

“The share of Americans who primarily go online through a smartphone has nearly doubled in recent years,” states the press release on the new Pew Research Center survey, out on Thursday. “Today, 37% of U.S. adults say that when using the internet, they mostly do so on a smartphone. This share was just 19% in 2013 – the most recent time the Center asked this question.”

Broken down by age, the survey respondents showed that younger adults were more likely to go for a phone. 58% of 18-to-29-year-olds said they “mostly” went online with a smartphone, up from 41% six years earlier. But even 30-to-49-year-olds' smartphone use has almost doubled in that time, up to 47% from 24%.

One of the impacts of mobile's dominance, Pew found, is that a large chunk of Americans — 45% — won't get broadband specifically because their smartphone is all they need to use the internet. And that number has jumped up from 27% in 2015, so it has risen a noticeable amount even just across the past four years.

“These patterns underscore the reliance that a minority of Americans have on their smartphone for internet access,” Pew explains.

“Some 17% of U.S. adults are ‘smartphone only internet users' – meaning they report owning a smartphone but do not have a traditional high-speed internet connection where they live. This share has roughly doubled since 2013, when 8% of adults fell into this category.”

Broadband might seem like a necessity to many, but a growing number of Americans are fine with their cell data.

Even though desktops or laptops are the traditional way we think about getting on the internet, they're not the future. Ensuring your website is mobile-optimized has been a must for years, but following Google's new mobile-first indexing, it's more important than any other format. Since March 2018 —  the same year mobile Google searches passed desktop ones — Google has started ranking sites entirely on their mobile versions.

Not all sites are truly mobile friendly: The speeds at which a mobile page loads matter, and in 2018, those speeds were slower than the year before. In other words, not all sites are surviving in the years-long shift to a totally mobile-dominant internet.

Don't expect to see mobile-centric content companies failing anytime soon, from YouTube to the much-maliged and yet to be launched Quibi video streaming platform. Assuming they can keep their mobile speeds up, that is.