We might have just had our first glimpse of the iPhone XI, and according to leaked images, the next Apple smartphone could pack a triple-camera.

Leaked renders appear to show what the upcoming iPhone will look like – from the rear, at least. And the design is, well, unusual. Featuring three misaligned rear cameras and an LED flash – all within a square camera bump – the iPhone XI is set to look like a bad Huawei Mate 20 Pro impersonation.

Below are some rendered images obtained by Steve Hemmerstoffer, better known by his Twitter handle @OnLeaks. Hemmerstoffer has a pretty strong track record when it comes to leaks, so the images could prove genuine. But, there’s still a long way to go until the iPhone XI launches, so take these with a sizeable pinch of salt. 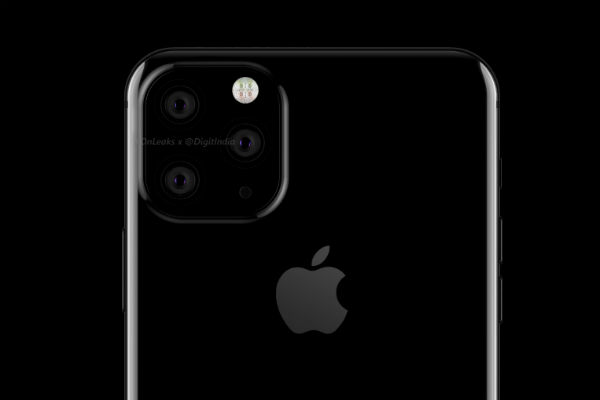 If the leaked renders above are to be believed, then the iPhone XI will have three rear cameras. As ever with iPhones, these cameras are contained within a pretty big camera bump that sticks out from the surface of the phone.

However, unlike the narrow “over-and-under” arrangement of the current iPhone XS and XS Max, these renders appear to show two lenses on the left-hand side of the camera bump, and one on the right-hand side, below the LED flash.

But, what does this mean for the cameras on the iPhone XI? At the moment, the current iPhones have two 12 megapixel rear cameras – one with a wide-angle lens and the other with a telephoto lens. The additions of the third lens might point to a high megapixel camera (think something in the 40Mp region) as is becoming common on other phones.

The jury is still out on whether more lenses actually lead to better pictures, though. However, adding extra cameras arguably lends weight to the opinion that Apple has fallen behind the times.

However, one area where Apple does have the edge on other smartphone cameras is in video quality. The Cupertino-based company could certainly double-down on its advantage here with a dedicated video lens. This would help assuage concerns that the company’s ongoing product strategy is to simply offer “more” of everything, rather than well-judged improvements.

A report from Bloomberg, though highlights that Sony’s 3D camera tech is receiving a lot of interest from phone manufacturers, including Apple. This tech would allow improved 3D mapping, and it would certainly seem beneficial to Apple’s ongoing commitment to augmented reality.

One question unanswered by these new leaks is what the upcoming iPhone will be called.

Apple ditched regular numbering for the more grandiose Roman numeral X when it launched the tenth-anniversary iPhone X. It also kept the X moniker for the improved XS and XS Max and the budget XR model.

However, it seems unlikely that Apple would persist with the Roman numerals. While XI looks fine, the idea of Tim Cook taking the stage in 2021 to launch the iPhone XIII seems unlikely. The potential confusion surrounding an eventual iPhone XIV doesn’t bear thinking about, either.

So, are these leaked renders plausible? Maybe.

As we mentioned above, Hemmerstoffer has a strong track record when it comes to his information being on-the-money. However, we’re still a long way from the iPhone XI, 11 or whatever it’s going to be called launching. Either way, we’ll continue to keep an eye on all the latest iPhone information here at Tech.co.

Read more about Apple and iPhones on Tech.co