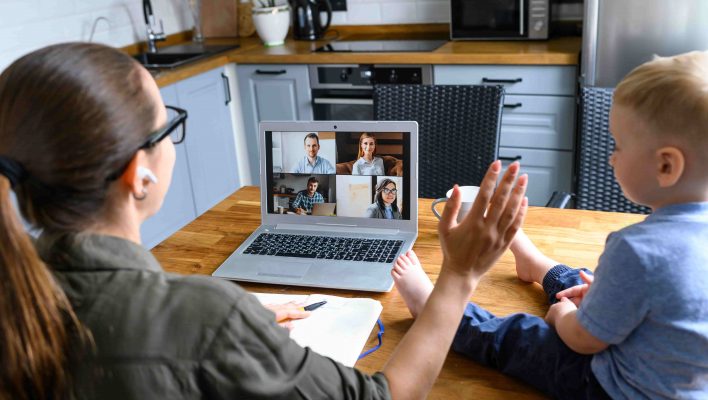 As COVID-19 case rates continue to slow in the US, companies across the country are creeping back to offices and slipping into hybrid working arrangements.

Despite the widespread availability of web conferencing software and other tools that help facilitate remote work, the debate over whether remote working negatively affects productivity and innovation has raged on against a backdrop of major companies in the tech sector and beyond changing their workplace policies.

But exactly how many jobs can be done from home, and will that number just get bigger and bigger? And if the lack of enthusiasm to return to the office is permanent and prolonged, how will affect society and the economy?

Home is Where the Job is

So, how many jobs can be done from home? The truth is, in a country like the United States quite a few. One paper, published in the Journal of Economics, for instance, estimated that over a third of jobs (37%) in the United States could be carried out entirely from home.

Management consultancy firm Mckinsey, on the other hand, estimated in early 2021 that about 29% of US jobs could be done at home with no loss to productivity.

Broadly, it’s around a third of jobs – almost the same as the proportion (35%) of US workers that were actually working from home in May 2020, the month the grim milestone of 100,000 deaths was reached in the US.

Hybrid working arrangements have also remained popular – Gallup found in October 2021 that around 20% of full-time US employees were working at home some – but not all – of the time. The pollster says 45% of employees are working remotely or have a hybrid arrangement.

The Mass Shift to Remote Working has Created a New Divide

What the Public Economics paper referenced earlier also illustrates the stark differences between jobs that can be done at home and jobs that can’t.

Internationally, lower-income countries tend to have a smaller share of workers who can work from home and smaller rates of GDP per capita than countries with higher percentages of jobs that can be completed at home.

A lot of the workers with jobs that can be done remotely will not only be paid more on average, but also have more freedom over their days, including when they break for lunch and various other flexibilities.

They’ll also save more money due to a lack of commute, and could have the capacity to save even more on food and other expenses that arise from the day-to-day office trip.

The demand for employee monitoring software since the pandemic began, however, illustrates that more day-to-day freedom isn’t necessarily a guarantee when working from home. But constant managerial surveillance is a norm of working life for huge numbers of workers that cannot work from home anyway, from warehouses to restaurants.

On the whole, home is where workers want to be – a pew study published this year shows that in October 2020, only around a third (36%) of employees who worked from home most of the time said they were not in their workplace because they preferred to work from home (as opposed to it being unavailable). In January 2022, that figure became 61%.

Will the Divide get Bigger and Bigger?

If you told someone in 1990 that 37% of jobs would be able to be completed from the comfort of workers’ own homes just three decades later, it’s unlikely they’d believe you. But here we are, and if this trend continues at a domestic and international level, the ramifications will be vast.

Domestically, in a country like the US, the ability to work from home has made a substantial, positive difference to the lives of millions of workers, whilst nothing has changed for others.

What happens if remote jobs become increasingly numerous and available, digital literacy continues to improve, and the pool of people applying for jobs that aren’t remote – essential ones like food delivery – dries up?

Would this mark the beginning of a new era of progressive working policies, such as reimbursing lower-income employees' transport costs for their commutes to work, considering they’re earning less and spending more? Could it accelerate the already quick-moving transition to an automated workforce happening already in many industries?

Why Companies Still Want People in the Office

With technology like web conferencing software so widely available, it’s no wonder the economy has managed to trundle on whilst adjusting to millions of workers leaving the office.

Many companies, however, want employees back as quickly as possible. Homeworking hampers innovation, they claim, and makes it harder for new starters to ease into the company and feel included.

All valid points of course, but is it the only reason? It would be a disaster for a number of large companies, for example, if all that expensive office real estate that was heavily invested in wasn’t really used by employees at all.

Whatever the situation on the ground, the important thing is that attitudes have changed – that employees will be expected to come into the office to work is no longer assumed, rather, it now has to be justified. And with 37% of jobs already able to be done at home, those reasons to come in are going are only going to get thinner.