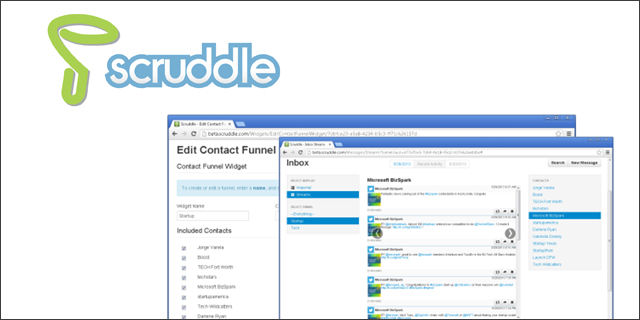 “Time has always been the biggest challenge, especially as a solo entrepreneur,” says Mark Doyle, founder and President of Scruddle. “I spent a lot of time trying to develop a business model, coding the entire website and underlying services, running my outside software contracting firm, and finding time for my family.”

He soon realized that you don’t have to go it alone, and it’s hard being a lone wolf entrepreneur. Recently, Doyle decided to bring on a co-founder, a true hustler, to help him shoulder the load of polishing the platform.

“I think the lesson here for other future solo entrepreneurs is that if you can’t do it all, you probably shouldn’t; find people that can do the things you can’t or aren’t able to do,” says Doyle.

So let’s re-analyze the situation here for a second. While some people might see Doyle’s solo skills as the key factor in his success, there is something else working with it; determination is what brought Scruddle from nothing to a usable beta version.

It all started when Doyle was searching for a product that would let him view all of his social media updates and news feeds together. He found nothing and, determined, began building his own solution.

“I was disappointed because I couldn’t view information the way I wanted to,” explains Doyle. “So, I decided to build it myself, and here we are.”

Scruddle has grown into a platform that lets users manage their digital information across Facebook, Twitter, Google+, Foursquare, email, and news feeds. And the initial response from the beta has been positive.

Doyle could have given up when he realized that HootSuite and Flipboard have him outgunned in terms of market share and money. But instead he continuously redefined the platform.

But being a determined entrepreneur, he only recognized a challenge. Doyle exploited the weak points of HootSuite and Flipboard, hitting the zones with the least amount of armor: their features.

According to Doyle, both HootSuite and Flipboard are great for publishing, but lack ability when it comes to customizing the display of information. This is especially true when it comes to the mobile realm.

“Still, HootSuite is the Goliath, especially after they secured the $165MM Series B,” says Doyle. “They have the resources to develop the features that Scruddle has; whether they choose to is a different story.”

But being determined to do it first would mean something huge for both Doyle and Scruddle. By instilling a simple mission to simplify the management of news and information, he could very well play the ‘David’ character that hurls a well-placed stone at ‘Goliath.’

As he moves forward, Doyle’s determination has dictated three precepts. His first goal, hiring a co-founder to handle the business and solicitation, is accomplished. Second, he will launch Scruddle out of beta in December. And last, he will remain open to feedback to make his platform amazing: be sure to let him know what you think.