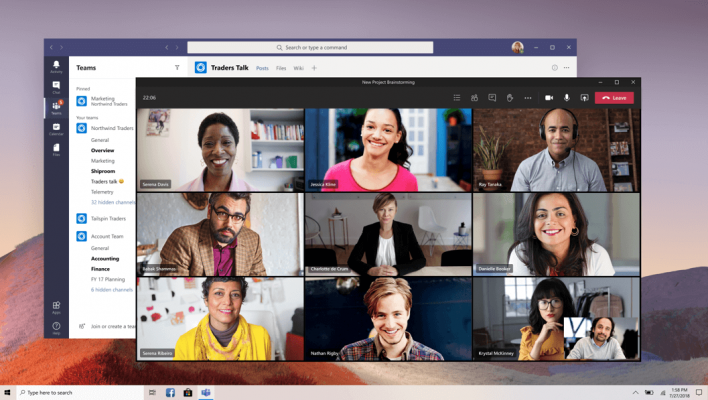 It's been a long time coming, but privacy-conscious video callers will be pleased to learn than Microsoft is adding full end-to-end encryption to Microsoft Teams.

The news was revealed at its three-day Microsoft Ignite event, alongside more security improvements for the collaboration platform.

With the pandemic seeing the work space become more fragmented as many continue to work from home, the extra security settings for Teams are sure to be welcomed.

The announcement, made at this month's Microsoft conference, improves the security options of video calls. It has, according to Microsoft, been a feature that its customers have been regularly asking for in feedback. It's not too surprising that this has been on Microsoft's to do list – competitors such as Zoom added this feature back last year.

The feature, which is to be added in the first half of 2021, will give users the option to enable end-to-end encryption (E2EE) for one-to-one ad hoc VoIP calls, initially. However, the option can only be applied if both parties have had it enabled by their IT department and opted in.

The move doesn't mean that all Team calls and chats are instantly covered by E2EE . While VoIP calls are the first to be granted E2EE protection, Microsoft states that it is working on bringing the tech to online meetings at a later date.

End-to-end encryption is definitely a big deal for Teams. But, it wasn't the only improvement to security that Microsoft announced at the event. It also shared details of smaller quality of life improvements to help protect online meetings and keep them on track:

One of the most unwelcome aspects of team video calls is uninvited guests dropping in. Sometimes this is accidentally, though even if it isn't maliciously, it can be risky for sensitive business calls.

For this reason, Microsoft is adding a new lobby settings for Microsoft Teams. This will only allow those that have received an invite directly to join. Anyone that attempts to access the meeting without an invite will be held in the lobby, where the host can choose to accept them or not.

The feature will be added later in the month.

In addition, another new function is the ability to disable an attendee's video feed. This could be used in cases where an attendee is being disruptive, or if they don't themselves realize their flatmate has just walked out of the shower behind them, or simply if the host wants to foster a meeting with few distractions and a single focal point.

The ability to disable attendee video will be rolled out in the spring.

This feature was originally requested via the Microsoft Teams forum, and garnered thousands of votes of support, so it's sure to be a favorite for some users.

While there were a bevy of security announcement for Microsoft Teams, Microsoft also mentioned a few other new features, outside of Teams, that are of note:

Co-authoring for Office Apps will allow multiple users to simultaneously edit an encrypted document that has been encrypted using Microsoft Information Protection.

Through the use of sensitivity labels, which can be used to enable and restrict access for users, owners can ensure that only the right people have the permissions to edit a document. The document can be shared with others as an attachment, and the encryption setting will remain.

In order to utilize this setting, employees must ensure that their IT department has enabled sensitivity labels for Office files.

Safe Links are a Microsoft Defender feature that scan links to ensure that they are safe, especially useful for identifying potential phishing attempts.

This week, Microsoft announced that this feature can now be used by Microsoft Teams to protect users from malicious links shared through Teams conversations and channels.

Safe Links for Teams is rolling out later in the month, and as with sensitivity labels above, needs to be approved by the company IT department.