Netflix might be sweating a bit following the news of a Disney/Fox merger, given Disney's upcoming rival service, but there's no disputing the video streaming service's dominance over the current market. How could you, when Netflix is responsible for nearly a third of all home entertainment revenues in the nation and 82 percent of kids raised on the service don’t even know what commercials are.

But one comment from this year's Q1 earnings call drew plenty of attention and deserves revisiting as we close out the year: CEO Reed Hastings' claim that sleep itself is their main competitor.

“They’re doing great programming, and they’ll continue to do that, but I’m not sure it will affect us very much. Because the market is just so vast. You know, think about it, when you watch a show from Netflix and you get addicted to it, you stay up late at night. You really — we’re competing with sleep, on the margin,” he said in the call.

Just what is the relationship between one's sleep and one's Netflix viewing habits? Does Netflix hurt your sleep? The good folks at Amerisleep recently surveyed over 1,300 people to bring TechCo an exclusive report detailing the answer.

The study found a correlation between those who overwatch on the streaming service and those who went to sleep later than the wanted.

“In our survey,” an accompanying blog post says, “Americans who admitted to regularly staying up to watch Netflix went to bed 26 minutes later on average than those who rarely or never used the popular streaming platform. They also got less sleep (by more than 10 minutes) than Americans who said they didn’t use Netflix and were more likely to get less than seven hours of rest each night.”

The worst reason why viewers couldn't stop to catch the requisite number of Zs? The “addictive nature of their favorite shows,” according to 46 percent of respondents.

Take a look through the study's accompanying infographic below for the rest of the reasons. It appears Hastings' claim is validated by the data, given the hints it drops at the ways in which Netflix is winning its battle on its customers' healthy sleep habits. If you can't summon the energy to stop that autoplaying episode feature, you'll see Netflix hurt your sleep every time.

Perhaps a better question might be whether another episode of your favorite show is worth losing that precious sleep over. That said, I definitely should have skipped that second episode of Dark I watched last night, so I'm not about to cast the first stone here. 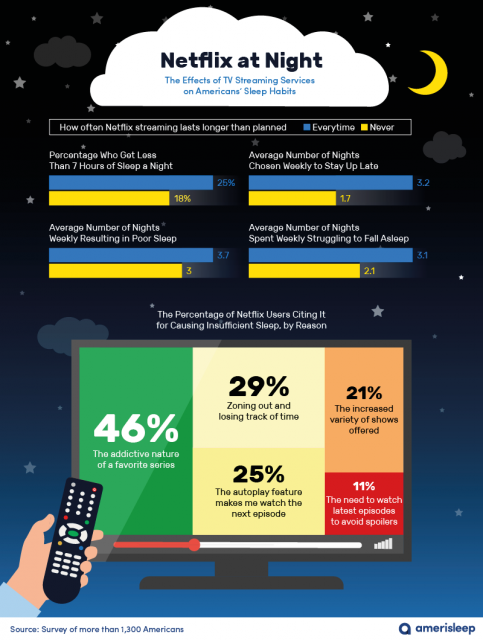