Apple held a launch event yesterday in Brooklyn. And it set about launching new versions of some of its old big-hitters. We saw a new MacBook Air, a new Mac Mini desktop and two new iPad Pros.

The theme of the event was “more”. Each of the new products is more powerful and more expensive than the older models they replace. But where do they leave the existing MacBooks and iPads still on sale?

While the tech in each of the new models is impressive in isolation, it’s difficult to get a handle on who exactly the new devices are aimed at, and how the new devices — particularly the MacBook Air — fit into the existing lineup of Apple products.

Plus, what might be more concerning is that, again, Apple hasn’t unveiled any truly game-changing devices in the way it used to. Is Apple now innovating at a much slower pace, or even running out of ideas?

In updating two of its less attention-worthy machines, rather than unveiling new devices, Apple has done little to ward off the critics who say innovation is scarce.

The new Mac Mini, in particular, feels like a device that no one was really asking for. Pure desktop computers have long been on the decline, with consumers opting for laptops and tablets instead. If consumers really wanted Mac Minis, Apple would have surely updated the Mac Mini lineup sooner. 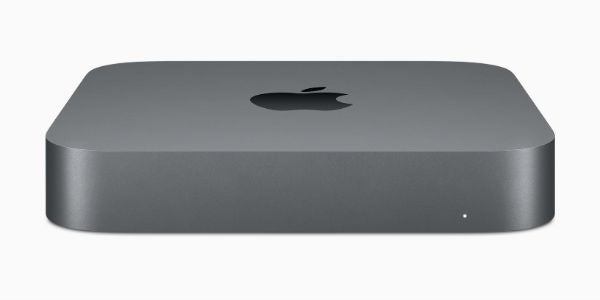 It’s not as if Apple radically overhauled the device, either. Externally, it has exactly the same dimensions as before, it just comes in a darker shade of gray.

On the inside, all you get are some long overdue processor and graphics card updates, and new storage options. Of course, updating desktops is always a trickier business than updating a laptop, as all you can really change are the components. But, it shouldn’t take a company of Apple’s stature four years to get a new Intel chip into a box.

Apple could have given it wireless charging capabilities, or announced a new Magic keyboard and mouse to accompany the updated Mac Mini. It could even have pinned the device as a potential smart home device and given it the new MacBook Air’s ‘Hey Siri’ functionality.

Apple even struggled to define who the Mac Mini was aimed at in the keynote. It offered a myriad of potential users for the Mac Mini — students and musicians using it to unlock their creative potential, film crews using it to edit on-the-go, photographers tying multiple Mac Minis together to speed through tasks, and even walls of Mac Minis being used to power data centers for app developers.

Needless to say, all of these potential users will need some pretty deep pockets — the Mac Mini now starts from $799 without a screen, keyboard or mouse.

Should you buy the new Mac Mini?

Blurring the Lines of the MacBook Lineup

It’s with the MacBook range that things really feel in a mess. Most notably, the new MacBook Air struggles to differentiate itself from the 12-inch MacBook already on sale (simply known as “The MacBook”).

The new Air is designed for portability. But it’s both bigger and slightly heavier than the 12-inch MacBook. The Air has a better processor, though and functions such as TouchID. All of this makes the lower-powered 12-inch MacBook seem like a strange option.

What’s even more confusing is that the Air is now the cheapest Apple laptop on sale, starting from $1,199. The MacBook and MacBook Pro both start from $1,299.

So where does this leave consumers choosing a MacBook? Sure, the Pro is there for power. But for portability, is there really enough to separate the cheaper MacBook Air from the slightly lighter and thinner MacBook?

We don’t doubt that the new MacBook Air will be a good laptop. But Apple could have, and perhaps should have, done more with it if it wanted to keep both the Air and the MacBook as truly compelling alternatives to one another.

This lack of clarity in the Mac lineup is a new and odd trend for Apple. It seems to present a brand at a crossroads.

For help on differentiating your MacBook Airs from Pros, see our helpful guide, Which MacBook Should I Buy?

While the new Mac Mini and MacBook Air flattered to deceive, the updated iPad Pros are definitely improvements from their predecessors.

In place of the once-ubiquitous Home Button is the same FaceID and gesture control tech from the iPhone XS and XR.

It’s entirely likely that the changes to the iPad Pro range this year will lead the way for changes to the regular, non-Pro iPads next year. It could work out much the same way that 2017’s iPhone X debuted the no-button approach, only for it to become the norm for all of Apple’s iPhones with this year’s XS, XS Max and XR models.

Both iPad Pros also use the LCD Liquid Retina display tech that debuted on the XR, allowing for rounded corners. It’s a shame that these don’t use the sharper and more energy efficient OLED screens from the iPhone XS and XS Max, but it’s not the end of the world.

Arguably, Apple has done a far cleaner job at distinguishing its various iPhone models from one another. This shouldn’t be too surprising as the iPhone is now Apple’s bread-and-butter, making the company more money than the rest of its products and services combined.

Want the top-end model with the best processor and cameras? That’ll be the iPhone XS. The same, but a little larger? No problem, get the XS Max.

After most of the latest features, but at a cut-down price? That’ll be the iPhone XR, then.

If you want an even cheaper iPhone model, you’ll need to dip into the older ranges, such as the iPhone 8 or iPhone 7. But, as far as the 2018 iPhone releases go, at least you know where you stand with Apple’s relatively self-contained iPhone family.

To understand the iPhone lineup, see our Which iPhone Should I Get? guide

Were The Updates Groundbreaking Enough?

Apple certainly manages to deliver tangible updates to its phones and tablets every year, but often leaves its traditional computers alone for years without so much as a refresh.

This week’s event saw the first updates to the MacBook Air and Mac Mini line in some time, and the outcome was…fine. Not gamechanging, but plenty of incremental improvements that will doubtless result in extremely high quality computers.

The problem is, in these days of short-attention spans and ever-competing tech launch events, the crowd craves a game-changer, not a perfectly respectable update.

Of course, Apple could be playing a clever game here. By refusing to update its devices every year, perhaps it reinforces in consumers’ minds that the Cupertino company’s devices are so strong that they don’t need to be updated every year. And, of course, it gives Apple a significant amount of slack to introduce less significant updates and play them off as big news.

We might be overthinking that, though. Either way, hopefully this event was something to tide us over for a bigger, more groundbreaking reveal for Apple computers in the near future. But we’ve got no indication that such a launch is coming.

Of course, if Apple has to resort to grabbing attention with Lana Del Rey, as it did yesterday, it might be the clearest indication that company isn’t the tech leader it used to be.

Want to know more about the recent Apple Event?