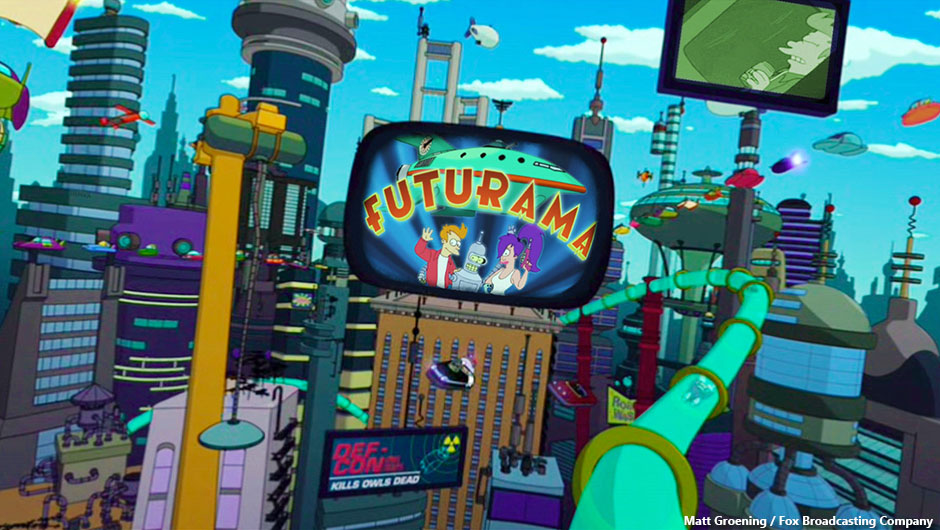 Two years ago, I don't think any of us could have predicted the invention (let alone the rapid adoption) of the self-balancing scooter; by no means is it the hoverboard of our 1980s fantasies, but in terms of efficient, automatized ground travel, it likely fulfills many of the expectations that we may have wanted from a real hoverboard. Similarly, while it was hard for us to say our goodbyes to Futurama back in 2013, it's surprising to see how far we've progressed technologically looking at all the consumer products we now have on the market.

From the first fully-automated drone to an automated delivery robot, our real-world technology has evolved rapidly since the Matt Groening, sci-fi brainchild got canceled for it's arguably too-erudite-takes on social justice, being and mortality, and the ethics of technological advancement. Sure, at face-value, Futurama could be argued as just another adult, animated series using tropes similar to that of its predecessor, The Simpsons; however, the show's setting in the 31st century provided us with a deeper appreciation for the seemingly limitless parameters of science and technology (albeit all imagined).

2015 has brought with it many advancements in consumer tech – half of which you've probably never learned – that prove imagination's quick development into reality. Check eight real-life products that exist today that suggest we're currently in an episode of Futurama. This series on consumer electronics is brought to you in partnership with the Consumer Technology Association (formerly the Consumer Electronics Association).

Fetch Robotics is a company that builds robot systems for the logistics industry. The company has created a complete system of robots aimed at improving the way people handle logistical tasks – like warehouse delivery, pick and pack, and anything else. Watching the video, it really does seem like we've moved even closer to a smarter world where robots and humans work alongside together. Sure, they may not (yet) have the intelligence of Bender (and, sadly, none of his abrasive comebacks), but the Freight and Fetch units work together to ensure that those working in the logistics industry can rely on them to work efficiently in a warehouse to retrieve and pack a consumer's requested product and prepare it for shipment.

“Over the next few years, expect to see many more warehouse and e-commerce companies turn to robotic solution to streamline their operations and gain competitive advantage.”

Renowned for getting an offer from investors on ABC's Shark Tank back in 2012, SMARTwheel has designed the first intelligent steering wheel cover aimed at reducing the more than 400,000 injuries that result every year from car accidents involving distracted drivers. According to the most recent study by the National Safety Council (NSC), the use of mobile phones caused 26 percent of U.S. car accidents in 2013. SMARTwheel provides consumers with a way to monitor their driving behaviors and to prevent such tragedies. 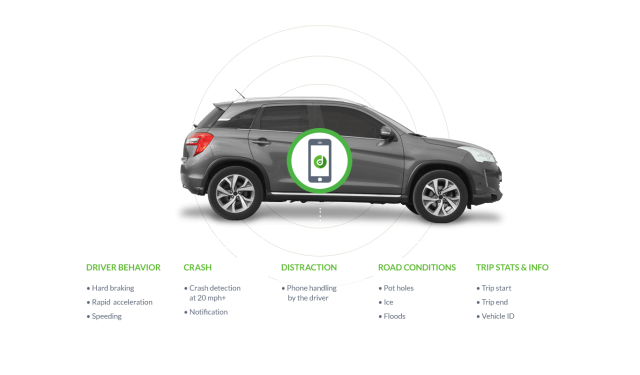 As much as our behaviors inside the car affect our overall safety when driving, even the most vigilant driver can make an error. Driversiti has created a platform that easily turns any driver's car into a “situational awareness safety device”. Utilizing your smartphone's sensor data, Driversiti creates a connected car ecosystem that works towards understanding each person's driving behavior through machine learning and artificial intelligence. The platform tracks user data/activity to see whether the driver engages in hard-braking or speeding, can detect crashes at 20+ MPH, and even understands the road conditions to which a driver is exposed.

While it's too soon to determine whether we'll all be riding around in Google's self-driving car in the immediate future, Driversiti CEO, Sascha Simon, asserts:

“We will start to see algorithms that will be able to unearth patterns without being taught them first, but through loose hints. This means that they will become reactive with little to no human training.”

Recently named a 2016 CES Innovation Award Honoree by CTA, the LifeFuels Smart Nutrition Bottle is the first smart water bottle of its kind. The all-in-one hydration system provides consumers with the ability to fulfill their everyday nutrition goals through a joint hardware and software solution. The water bottle's unique dispensing unit lets you have your fill of vitamins, minerals, supplements, and flavors through “FuelPod” units. Paired with the LifeFuels mobile app, users can get a more complete overview of their health through connections to popular wearable devices like the Apple Watch as well as any of Fitbit's and JawBone's health trackers.

“The mission of LifeFuels is simple: we are fearlessly building a healthier world, empowering people with magical products, and simplifying wellness through intuitive design,” says LifeFuels cofounder and CEO Jonathon Perrelli. “The future is now for health care embracing technology. Health care providers enable more effective treatments through active monitoring of patients and through patient behavior modification and coaching. Digital health and fitness products provide the capability and information required to facilitate these key areas of emphasis and improvements in the health charts and trends of each individual patient. All indicators point to a continued trend of technology being used more personally in health care.” 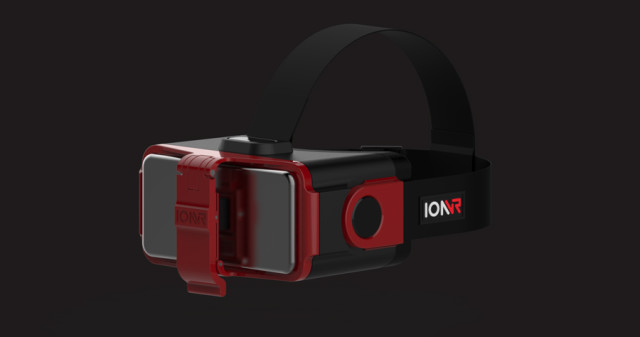 IonVR is a company behind an entirely new kind of virtual reality headset that gives consumers the ability to experience virtual reality simply by strapping in your phone. Through the company's MotionSync technology, the IonVR headset is the first in the market aimed at reducing VR sickness (like motion sickness, but caused by the user being exposed to virtual reality environments). Additionally, IonVR's headset operates separately from any smartphone attached to it, so there's no additional drain on your phone's battery. Completely modular, the headset can easily be upgraded to fit new technologies (i.e., newer smartphones) and remove the need to buy an entirely new headset.

“The promise of virtual reality is incredible. But it has to be good to be adopted,” says cofounder and CEO Brooke Linville. “Long gone are the days when we are willing to settle for tube television quality…But much of mobile VR right now isn’t high quality;[they're] phone holder[s] with low-quality lenses. We wanted to provide the IMAX of mobile VR, the kind of visual experience that would blow consumers away – and not make them sick.”

In Futurama, the future is filled with robots designed to specialize on certain jobs (Bender, for instance, um…bends things). Well, Somabar is a robot bartender…essentially. Currently in its final stages of manufacturing, it's is the very first app-controlled robotic bartending appliance of its kind targeted at consumers. Paired with a mobile app, users direct the device to create bitters-infused cocktails: simply-made cocktails without having to go through the usual mess of manually mixing cocktail ingredients yourself. Somabar ran a successful Kickstarter campaign that resulted in an overfunded $312,707 campaign (way more than the company's intended $50,000 goal). While you'll have to wait for manufacturing to complete, you can still place a pre-order for your own Somabar unit online.

No, not a battery made out of paper – but, close enough. Paper Batter Company has developed a supercapacitor-based energy storage and battery enhancement technology that can potentially replace our reliance on lithium batteries. What makes them so great is not just their form and size – literally paper thin (or as close as a battery can get) – but their ability to provide higher energy density compared to other capacitors, quicker charging time, greater reliability under high temperatures, longer life cycle. This is the kind of technology that – to my knowledge – wasn't even fathomable in Futurama.

Just this past week, the Paper Battery Company announced that it had won CTA's Innovation Entrepreneur Award for leading the path into energy tech powering all types of electronic devices.

Eggcyte has created The Egg, the first consumer product of its kind that is focused on giving consumers the ability to privately control, share, and stream their personal photos, music, videos, and other media content without the need for social media or traditional cloud services. In a way, you can think of The Egg as an external hard drive to which you (and anyone to whom you give permission) can connect remotely through Wi-Fi. Rather than depending on already-existing cloud services like Dropbox and risking public access, you have your very own private, personal cloud device.

According to Eggcyte cofounder Barry Solomon:

“The Egg is an opportunity for the average consumer to control their personal information online.  We think consumers will adopt The Egg to preserve their personal privacy.”

Want to learn more about the trends impacting consumer electronics? Interested in learning whether 2016's technologies will push us further (and beyond) what Futurama had to offer? Register now for CES 2016 this upcoming January 6 – 9, 2016 in Las Vegas, NV.