With the Consumer Electronics Show in Vegas in full swing, many manufacturers are hoping to hit the headlines with a bang. But, for the makers of Promobot, an autonomous robot designed for business, this happened quite literally when one of its fleet was taken out by a Tesla in self-driving mode.

While autonomous vehicle accidents are always big news, the twist on this one is that the victim was a robotic brethren. This might just be a first.

That's not to say that the accident shouldn't be treated as serious, of course. According to its owners, the fall has damaged the Promobot beyond repair, meaning it may never dance awkwardly at a corporate event ever again.

The accident took place on Sunday night in Vegas, as the robot was being prepped for its CES 2019 debut the following day.

According to the Promobot's owners, the hapless automaton was heading to an event space at CES, when it left its group and strayed into the road. At this point, a Tesla, in self-drive mode, clipped the robot, causing it to tumble to the ground.

As luck would have it, Promobot's handlers caught the whole thing on video. Viewer discretion is advised for robot lovers:

The passenger of the Tesla did stop at the scene, no doubt to do a double-take and rub his eyes in disbelief. While the Tesla was going fairly slowly at the moment of collision, Promobot has stated that the robot is severely damaged, with parts of its body, arms and head destroyed.

The driver stated in an interview with the Daily Mail, “There was nobody there, no men, no cars. I switched this Tesla into a self-driving mode and it started to move. And wow! A robot on the track!  I am so sorry, the robot looks cute.”

There's no mention of the robot claiming the Tesla's mother was a snowblower or sign of previous beef, so it seems that this was a genuine accident. 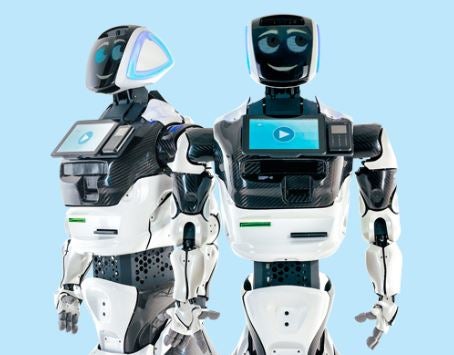 Autonomous car collisions are nothing new, especially in California, which is where a lot of road testing has taken place. In fact, we've mapped every car collision there so far.

While driverless cars hitting other vehicles, and even people, aren't unheard of, this has to be one of the first instances of an autonomous vehicle hitting a robot. It may even bring with it a whole host of issues, particularly for the insurance companies tasked with assigning blame.

Then, there's the thorny issue of what happens when robots become more commonplace in society. In a Venn diagram, the words Tesla, robot and CES practically form a perfect circle, so the chances of this happening eventually are fairly high.

As we continue to introduce robots into our daily lives, it's a problem that could only snowball. There have been studies into the AI of self-driving cars and their priorities in accidents – some researchers have developed entire hierarchies of hypothetical victims and the order in which the cars should decide who dies.

It's a grim, but necessary consideration. Looks like now, they'll have to factor robots into the equation.

What is a Promobot?

Promobot is a company that provides automated robots for corporate events. The bots are able to meet and greet visitors, relay information and show videos.

Among the benefits listed for hiring its robots over a living, breathing human, are the fact that they don't make mistakes or ever need a vacation. We can't help but feel that both these two points might need amending after Sunday's accident.

Incidentally, the robot was rented out at $2,000 a day, meaning that it had an annual income that probably far exceeds your own. So, don't feel too sorry for it.