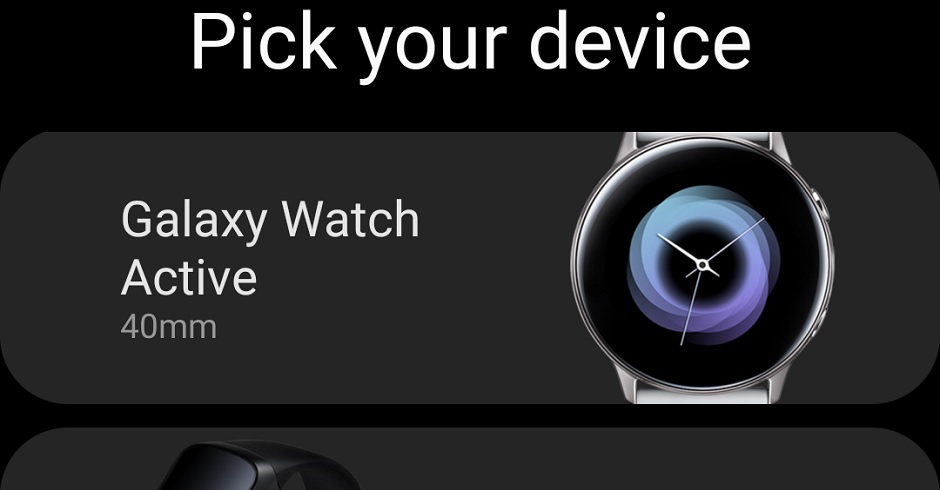 Whoops. It seems that somebody at Samsung HQ has hit a button early, as the line-up of its latest wearable products has appeared on the front of its dedicated Wear app.

The products include a new fitness watch, new fitness bands and wireless headphones. Thanks to the ever-busy Samsung rumor mill, none of these are exactly shocking revelations. But, in some cases, it's the first time we've had confirmation from Samsung itself about these devices.

We take a look at the new line up, plus give an overview on what to expect from Samsung's big product event next week. 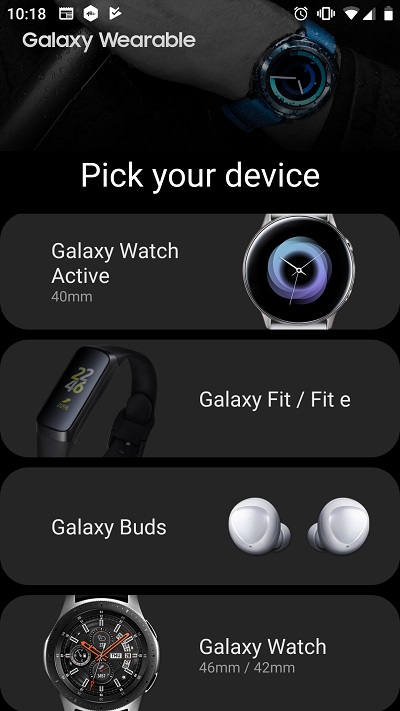 What are the New Samsung Wearables?

There are four new devices in the line up, which we have previously heard rumors about to some degree.

The first up is the Galaxy Watch Active, which internet detectives would have spotted before, after 91Mobiles got its hands on an early render of the device.

We can now confirm that it was the real deal, as the watch looks identical on the Wearable app. Sadly, it doesn't give too much away, other than stating that the case is 44mm.

However, it does mark something of a notable change in direction for the company, which until now has marketed its fitness watches under the Gear moniker, rather than Galaxy.

Next up, two new fitness bands. Named the Galaxy Fit and Fit e, we've had an inkling that these were coming thanks to a recent Bluetooth certification, but this is the first time we've actually had a look at the new devices.

The Fit doesn't appear to have the same sleek curved design of the Gear Fit 2, instead having a more flat screen. From what we can see, it also displays less data on the screen. This could point to a more entry-level device. The app also doesn't let on as to what that ‘e' suffix means, but we should find out next week.

Of the bunch, there are probably the least surprising, given the sheer volume of data that has already made it online about them. We've seen (unofficial) press shots of these already, and, like the Galaxy Fit, Bluetooth certifications have also appeared online.

There's a rumor that the Galaxy S10 phone will be able to charge other devices (if you're willing to give up your phone's precious juice). The Galaxy Buds would be a prime candidate for this neat feature.

How Did the Leak Happen?

While we've seen many Samsung leaks recently, it's rare that they come straight from the horse's mouth (one notable exception being its recent promotional video showing off its folding phone). Usually, our first peek at upcoming tech is thanks to an over- enthusiastic worker on the production line who sneaks out some snaps. While we've certainly had some of those for Samsung's latest line-up, this most recent leak comes from a rather unusual source – an official Samsung app.

The app in question is Galaxy Wearable, the companion app for all the wearable devices that Samsung offers. Syncing with the app allows owners to communicate with the device, control it, see stats, and so on.

Upon opening the app, the user is asked to pick the device they want to sync with. Usually, this would be restricted to products that are actually available on the market right now. But, it seems that someone at Samsung may have been a bit too eager to update the app, as it now displays Samsung's unannounced products.

At the time of writing, all are still visible on the app.

A deliberate accident? See our report into How and Why Tech Leaks Happen

What Can We Expect from the February 20th Samsung Event?

One of the things that Samsung has been straight with us about is the date of the big reveal – February 20th. At Samsung's major event, these wearables, plus other devices, will be ‘officially' unveiled. But, what should we be looking forward to?

The anticipated headline grabber of the event will undoubtedly be the Samsung S10, the latest flagship phone for the company. Of course, the S10 has been the subject of much speculation in the past few months.

Leaked images we've seen of it suggest that it could feature Samsung's first ‘pinhole' front facing camera, doing away with the placement of it above the screen, and instead setting it into a small hole in the display itself. There's also chatter that it will feature a fingerprint reader that is integrated into the screen.

Then, there's the expected Samsung S10 Plus, the S10 on steroids, with even more power and a larger screen.

If that doesn't get you hot under the collar, what about Samsung's first folding screen phone? We've already had a sneak peak, at a developers event in November. But the ‘blink and you'll miss it' demo has just left us with more questions than answers.

While Samsung isn't the first brand to get a phone like this to market, we do expect it to deliver a high level of polish and innovation.

Next week's Samsung event is sure to bring some fascinating products, but at this point, it's hard to say whether the company has any surprises left.