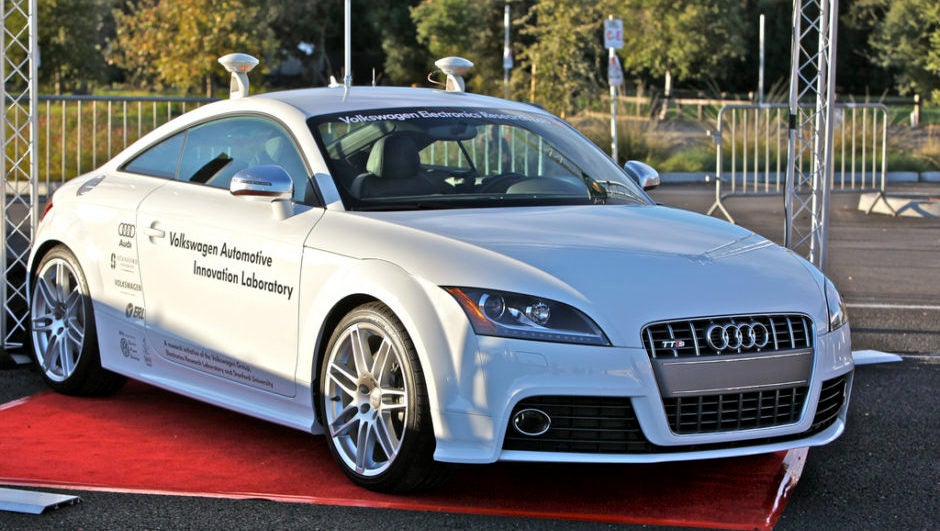 There are over 22 automakers and 34 hardware/software companies working in some way on self-driving cars. At least, that was the count when I released my latest technology report tracking the industry, “The State of Autonomous Vehicles.”  Since then, I’ve come to learn that there are more than a dozen additional companies that I need to research. And after CES 2017, that number will jump exponentially.

Anyone working in, covering, or tracking the industry can benefit from a primer and reference guide for the rapidly evolving industry. Knowing it would be outdated the week it hit the market, it invited feedback from experts around the world which contributes to an organized, scalable view of the industry, especially heading into CES.

Robots Will Be The Star

If you follow mainstream news, you’d swear that you can buy a self-driving car now. Truth is, you can, technically. Tesla’s made in and after October 2016 will ship with everything necessary to become fully autonomous. Tesla would simply need to issue an update when city infrastructure and laws catch up.

Mercedes too, will be ready as other manufacturers who are proactively implementing next-generation technology into its vehicles today. At CES 2016, I drove, or was driven in, a 2017 Mercedes-Benz E-Class 70 miles in the Nevada desert. By switching one chip, the car transformed from a semi-autonomous “wow it can stay in its own lane, change lanes and stay two car lengths behind the car in front of it” to a fully autonomous car that could easily say “tell me where you’re going…I got you.” Other manufacturers such as BMW, Ford, GM, et al, are also making tremendous strides toward autonomy.

Automakers are just one part of the self-driving cars ecosystem. There are scores of startups and incumbent technology companies with more on the way with each building incredibly intricate and sophisticated systems to emulate and improve how human beings drive.  The industry is comprised of automakers, autonomous platforms, advanced computer vision, mobility services, development platforms, deep learning, deep neural networks, robotics, advanced 3D mapping, sensors, and several vehicle-to-infrastructure (V2I) and vehicle-to-vehicle (V2V) systems.

The State of Self-Driving Cars

For starters, it turns out that there are a lot of consumers who are resistant and skeptical of robocars. Automakers are incrementally releasing intelligent “driver assist” features such as self-parking, intelligent-braking and lane changing, adaptive cruise control, and other features to shift driver control to the vehicle.

While there was speculation as to whether Google would compete against automakers, the company recently launched Waymo, a dedicated business unit to help automakers accelerate autonomous delivery.

Innovation stemming from startups and technology incumbents are driving the accelerated innovation in autonomous technology, forcing incumbents to partner, acquire, or ramp up R&D to compete (e.g. BMW and Baidu; Fiat Chrysler and Waymo, an Alphabet company; and GM and Lyft). Toyota, Intel, and Mercedes-Benz have dedicated business units.

Startups such as Comma.Ai, Mobileye, and Delphi are offering their hardware/software components as “plug and play” to manufacturers looking to append semi and fully autonomous features and other machine learning components to their existing vehicle fleets to accelerate time to market.

Startups, tech leaders (such as Intel and Nvidia), and automakers are heavily investing in artificial intelligence, machine learning, and deep learning technologies to help teach autonomous cars to understand what’s happening around the vehicle, learn how to operate in a variety of scenarios and conditions, and also how to make safe and efficient mapping for paths forward, passenger comfort, and safety and the safety of those outside the vehicle.

Science and Software in Autonomous Vehicles

In addition to data science, social science is also becoming prevalent in autonomous development as companies such as Nissan and Audi take an anthropological approach to teach self-driving cars to act more human in their control and on-road actions.

Mapping software has emerged as its own category among technology providers in the autonomous space, as 3D terrain mapping is a critical component to the effectiveness and safety of self-driving cars as they navigate their environments.

Data shows that on average, cars are parked 95% of the time. With such downtime, traditional ownership could be considered obsolete. Shared or rental models now become more economically feasible. Automakers are also planning shifts from manufacturing, selling, and financing automobiles to focus more on monetizing self-driving applications. In some cases, cars will become platforms for passenger experiences, creating a new canvas for cockpits and opening the door to hospitality companies to offer mobility services. With each manufacturer varying in its ambition and intent, autonomous vehicles are nothing less than transformative. This is exciting and overwhelming at the same time.

We are officially on the path toward automotive 2.0. It’s not just a trite moniker though. Automotive 2.0 completely changes the nature of the relationship between driver and automobile. Additionally, automotive 2.0 sets the stage for vehicles to become something more than a “car,” separated not just by driver experience but also instead by passenger accouterments. Now, manufacturers face the inevitable shift from brand loyalty of today into more functional and lifestyle models where consumers employ automobiles-as-a-service. This is one reason why Uber, GM/Lyft, Nutonomy, VW/MOIA, among others, are aggressively investing in autonomous mobility services.

2017 is set to push us even closer to science fiction. And with each new startup, partnership, acquisition and technological breakthrough, we are witnessing a transportation renaissance that will affect every industry. So buckle your seat belt and get ready; it's going to be an exciting ride.

Brian Solis is Principal Analyst at Altimeter, a Prophet company, where he studies disruptive technology and its impact on business and society. He is globally recognized as one of the most prominent thought leaders, keynote speakers, and best-selling authors in innovation and digital transformation. His new book, X: The Experience When Business Meets Design, explores the importance of experiences and how to design them for customers, employees and human beings everywhere. Follow him on Twitter and LinkedIn.

Brian Solis is Principal Analyst at Altimeter, a Prophet company. He is globally recognized as one of the most prominent thought leaders, keynote speakers, and best-selling authors in innovation and digital transformation. His new book, X: The Experience When Business Meets Design, explores the importance of experiences and how to design them for customers, employees and human beings everywhere.