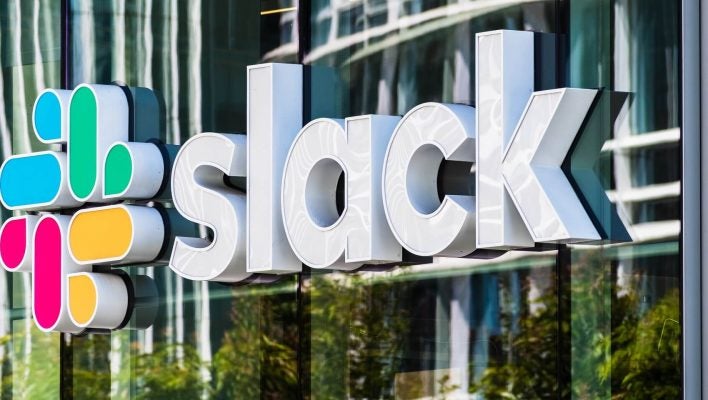 Slack has just debuted new integrations that'll make work-from-home life a lot easier for the millions who are new to the experience: Now they'll be able to jump into video meetings and VoIP calls directly from the Slack interface.

Here's how Slack is getting ahead of the pandemic-spurred retreat to remote work.

The biggest new integration is for Microsoft Teams, the team collaboration hub for Office 365. Through it, Slack users can access Microsoft Teams calling features without leaving the Slack chat window. These features include the ability to preview the call before joining, to see both when it started and who is currently in it.

Workers with the integration can set Microsoft Teams as their default for video calls, and it'll play well with pre-existing integrations like the Outlook Slack app, too, letting users join calls directly from their calendar notifications.

It all cuts down on the mental energy needed to switch from one interface to another, letting workers deal with the new work-from-home normal with a minimum of disruption.

Slack knows not everyone wants Microsoft Teams, so it has a raft of alternative options, with a focus on VoIP phone call capabilities. Integrations should now be available for four more virtual calling services: Zoom, Cisco Jabber, RingCentral, and Dialpad.

Once installed, the integrations will let users click a phone icon located beside each Slack username in order to directly call that user through whichever VoIP service they prefer.

All these VoIP companies are themselves seeing massive growth in the current work climate, with some offering deals or lengthening free trials in response to the global crisis.

Slack's Success During the Pandemic

In what will come as a surprise to no one, Slack usage has soared during the pandemic.

They not only hit ten million simultaneously connected users for the first time, but a week and a half later had bumped that number up to 12.5 million, CEO Stewart Butterfield revealed in a Twitter thread.

For us as a company, however, the shift is dramatic. In each of Q3 and Q4, we added around 5,000 net new paid customers.

The companies's shares are up as well, bolstered in part by Slack's early response to the COVID-19 pandemic. On March 18, the chat app company launched a set of online team resources, free 1:1 live consultations, and new webinars to help those shifting to remote work.

Slack has been slowly replacing email in the workplace for years now. Given their rapid response to the coronavirus pandemic, they're likely to continue that trend across the rest of the year and beyond.