There are few things in the world more annoying than slow internet speeds. Whether the Netflix won't stream, the Facebook won't load, or the Google Home won't respond, life comes to a grinding halt when the WiFi isn't up to snuff. Tragically enough, even the best internet plans out there can provide terrible coverage if you're in a rural part of the country, regardless of how much you pay. So where are the best places to live for fast internet speeds?

According to data from BroadbandNow, Rhode Island has the fastest internet speeds in the country. With an average download speed of 55.1 mbps, the small New England state is definitely the place to binge watch your favorite Netflix original series. As for the rest of the list, two states tied for second place, Maryland and Massachusetts (54.3 mbps), with California (53.8 mbps), Washington (51.6 mbps), and New York (51.2 mbps) rounding out the top six. 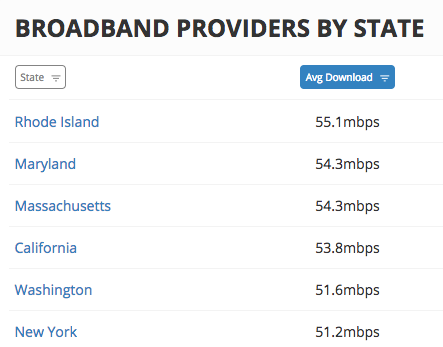 Unfortunately, these speeds are far from par for the course. With the national average hovering around 42.5 mbps, you know there are going to be a few stragglers at the end of the list. So if you live in Wyoming (17.3 mbps), Idaho (19.9 mbps), Montana (19.9 mbps), Maine (20.0 mbps), or Mississippi (21.3 mbps), we're sorry; we can only imagine what you're going through. 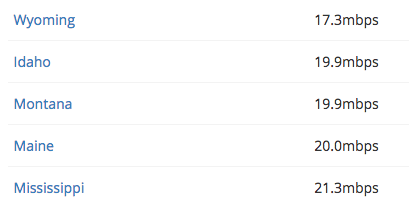 This is a problem. Shockingly vast differences in internet speed between states is a recipe for disaster. While places like San Francisco, Boston, and New York boast some of the more burgeoning tech scenes, these smaller states don't even have a chance to compete with these internet speeds. Sure, tech employees aren't flocking to Boise to set up shop, but even if they wanted to, they would be egregiously hindered by speeds slower than some developing countries.

Fortunately, there are a few tech companies looking to do something about it. SpaceX, for example, has recently announced a plan to launch more than 4,000 high speed internet satellites in hopes of providing reasonable speeds to people all over the country. Likewise, Microsoft has launched a meaningful project that aims to connect rural parts of the country to the internet.

While the internet used to be a luxury reserved for tech entrepreneurs, bank executives, and really intense video gamers, it has become an undeniable necessity to survive in the world today. From financial transactions to school work, slow internet speeds can significantly disrupt the everyday life of anyone living in these cities. If you don't believe that, try putting your smartphone down for more than a day, and see what life is like in rural parts of this country today.