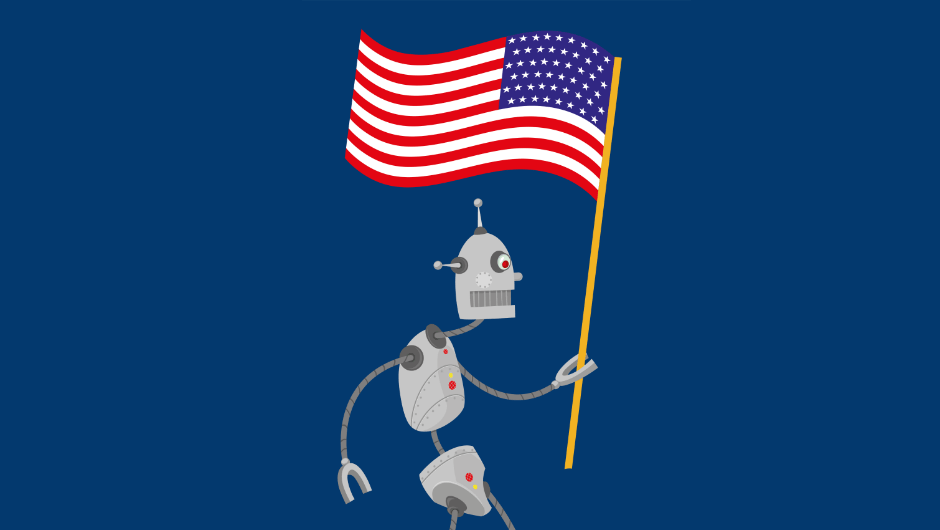 President Trump issued a new executive order this week, and it's all about artificial intelligence. Dubbed the “American AI Initiative,” it aims to boost AI research and regulation efforts across the United States' federal, academic, and private sectors. Just how useful will this initiative prove to be, and how might it help (or hinder) America's place in the global race to lead on all things AI?

Here's all the details you need about the nuts and bolts of what's been signed, what it all might look like in practice, and how it stacks up against AI research efforts that aren't taking place under our star-spangled flag.

The American nation, according to Trump's new executive order, must “drive technological breakthroughs in AI across the Federal Government, industry, and academia in order to promote scientific discovery, economic competitiveness, and national security.”

The report has a couple big problems, however.

First, it doesn't allocate any federal funding towards its aims. Without the funding, there's not a lot of forward momentum. That's a pretty big problem for an executive order that makes such sweeping claims. The government can definitely still make moves in AI regulation, but, without funds earmarked for AI specifically, it won't be able to regulate as effectively.

Second, the order is light on the details of how this AI-centered revitalization will take place. The order calls it of “paramount importance,” but doesn't offer any concrete path forward.

In a statement about the order, Democratic senator Mark R. Warner noted a few more specific concerns. The order acts as though AI is an “inherently positive” force, for one thing. You don't need to look far to find evidence to the contrary, such as that AI has replicated systemic prejudices like racism and sexism in the recent past.

In addition, Warner says, the order ignores the ways that American private companies' AI dealings with “adversary countries” may be undermining U.S. rights.

“While the Executive Order explicitly references the activities of strategic competitors and adversarial nations,” Warner writes, “it offers little concrete guidance on how the U.S. should respond to adversarial and malicious uses of AI technologies by state and non-state actors alike, nor does it address instances where American technology companies are working in and with adversary nations in ways that undermine civil liberties, privacy, and American leadership.”

Is this executive order a kick into gear for AI in the US? Not exactly. It's more of loud proclamation that the US really should be kicking into gear, without any of the details or funds that would make increased AI research a certainty.

No Real Regulatory Framework for AI

Currently, the federal government has no centralized AI regulatory or research group, though some departments – including DARPA and IARPA – have individual AI initiatives. That's not to say that AI isn't a big priority for America moving forwards, of course.

In fact, the cart might be driving the horse on this one, as Trump's executive order comes after urging from others for America to get into the AI sector.

Most notably, former defense secretary Jim Mattis penned a memo nearly a year ago urging Trump to take action on AI. In it, according to the New York Times, Mattis “argued that the United States was not keeping pace with the ambitious plans of China and other countries.” It's this dash of nationalism that likely attracted Trump's attention and led to this Monday's saber-rattling executive order.

AI regulation in America is currently more potential than reality, but there's a growing interest in it. Just last month, scientists and policymakers alike met for the first MIT AI Policy Congress, and academic proposals for greater AI regulation are freely available online.

At this point, we'd take anything. Even Microsoft president Brad Smith has called for “thoughtful government regulation” of facial recognition AI, and, when even the big corporations are asking for regulation, you know there's a real need to act.

What Are Other Countries Doing in AI?

China and others have built up impressive AI programs. China, in particular, is deeply integrating them with its citizens' lives. Beijing and Shanghai police departments have begun using “gait recognition” technology, an AI developed by Chinese surveillance company Watrix to identify people by their walking pattern.

China debuted an AI plan on July 2017 to become the industry's world leader by growing Chinese AI to a $150 billion industry by 2030. In a contrast to the U.S. executive order's lacking of funding, China pledged to invest a minimum of $7 billion.

Meanwhile, Russia is betting that AI is the future of weaponry, having doubled its AI funding last year. Russia aims to debut its own federal AI “roadmap” by mid-2019. The European Commission has its own roadmap coming even sooner, as it recently released online a working document for its AI ethics guidelines with a finalized version to be published by March 2019.

The global AI market currently stands at $1.2 trillion. But, it'll grow ten times larger across the next decade or so. Hopefully, the U.S. can soon settle on stronger regulation and establish some real funding, or it's leaving a chunk of those trillions on the global table.