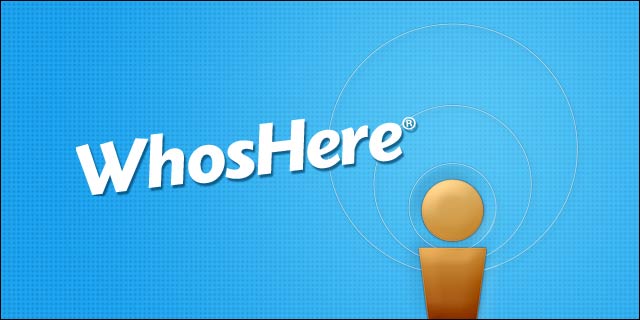 For the privacy conscious, some of the hot new applications for meeting people are causing a double take. Apps like Highlight and Banjo are so useful, the story goes – they show you everyone nearby on a map.

They show you everyone nearby on a map?

If you find that creepy, WhosHere might be a good alternative. Founded in March 2008, it was a social discovery app before there were social discovery apps. Its users have already sent 8 billion messages to connect with interesting people nearby, and now WhosHere is launching video chat.

Video chat came about as a way to deal with fake profiles and fake photos – to make sure you’re not talking to an older man impersonating a younger woman, or an abnormally clever cat.

“We’ve made this very safe, very uncreepy, very natural for people to verify who they’re talking to,” explains CEO and cofounder Bryant Harris.

In line with this focus on privacy, WhosHere doesn’t broadcoast your location; instead, it notifies you when your interests match someone’s nearby. The app is mainly for dating – Harris met his fiancée on it – but also for finding friends and mentors.

Other apps do let you disable “location tracking,” but WhosHere goes further: you don’t have to connect with your Facebook profile or even list your real name. You can send text and voice messages anonymously, then share information about yourself when you’re ready – mimicking the process of meeting in person. (By default, privacy settings prevent other users from calling or video-chatting you until you change them.)

Video chat is available now on WhosHere's iOS app  and soon on Android. Funded by Lightbank, WhosHere has grown to over 5 million users – 400,000 on any given day – and 17 languages. Before you go, read Harris’s biggest takeaway from the last 4 years:

“We mostly bootstrapped this ourselves, and I think that’s definitely the hard way to do it. But it also teaches you a lot of discipline – there’s always going to be ups and downs, and I think going through that process and having that resolve that you’ll figure out a way and you’ll get through it is just critical. Because you get lots of good news, but then you also get a fair amount of bad news, and you just have to react to it and correct it if it was a mistake. Sometimes it’s a mistake you made, sometimes it’s a change in the industry – whatever it is, you just have to react to it and just keep plugging away.”