This content has not been updated since June 2020. For more recent tech advice for your business, why not check out the best phones of 2021.

The Motorola G8 Power Lite is a phone designed to offer exceptional battery life. And it delivers, too, returning well over two days worth of battery life in typical usage.

However, it achieves this remarkable figure at the expense of...almost everything else. The specs are below-par, and the overall experience leaves a fair bit to be desired. So, prospective G8 Power Lite buyers must ask themselves – how much does battery life really matter?

The G8 Power Lite is the cheaper and lower spec version of the G Power, which also offers remarkable battery life for not a lot of money. The G8 Power Lite costs around $185, whereas the regular G Power costs $250 – but then again, you have to make do with a slower processor, poorer cameras, and a cheaper design.

There’s precious little to choose between the two phones when it comes to real-world battery life, and the G8 Power Lite’s lackluster specs offers no chance of redemption. Nevertheless, let’s take a closer look at what this budget Motorola can offer.

The G8 Power Lite is built for one thing – long battery life. It has a huge 5,000 mAh battery, which is larger than almost all phones on sale at the moment, apart from the more expensive Moto G Power.

Motorola claims that you’ll get a healthy three days' worth of battery life. During our testing, we found those numbers were definitely achievable, as long as you aren’t using the phone for anything too intense.

With its low-powered processor, the G8 Power Lite’s standby life is excellent. This makes it a perfect choice for someone who doesn’t actually use their phone too much, or if you want to take it to a festival, for example.

When it comes to actual screen-on time, the picture remains impressive. We were able to manage around ten hours of browsing social media, playing videos, and playing light games.

However, those numbers aren’t drastically different from the Moto G Power. Plus, the G8 Power Lite doesn’t get the 15W fast charging found on its more expensive cousin. Instead, you’ll have to make do with a standard 10W charge, which will fill the phone from empty in around two hours. 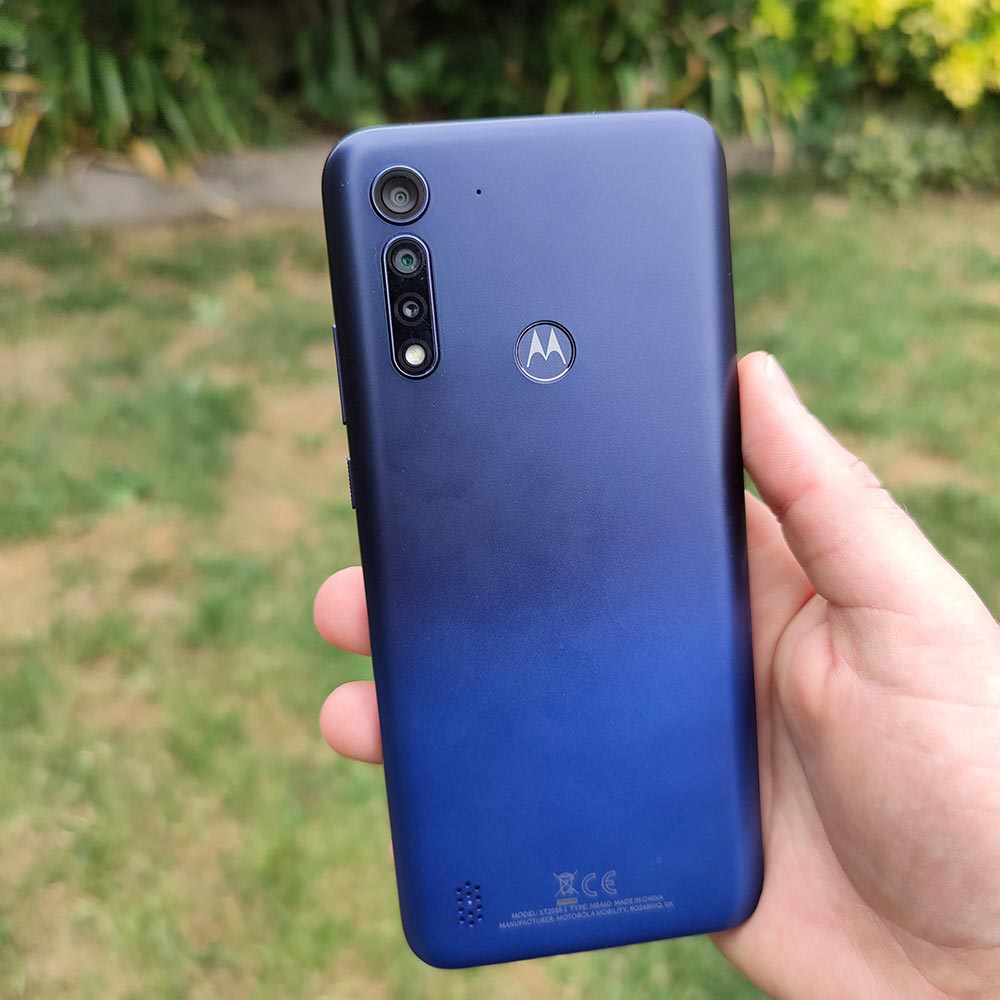 Images, videos, and games can all look quite pixely, and there’s a fair amount of screen tearing. With that being said, though, we’d generally expect those sort of issues from a 720p screen.

We did have two big complaints that we weren’t expecting, however. Firstly, the screen was simply too dark — even at 100% brightness, it seems dim. Secondly, and strangely for a Motorola phone, the color balance seemed too cold – and no matter what we did with the settings, we couldn’t find a setting we really liked.

Aside from the screen, the rest of the design is fairly underwhelming. It uses a Micro-USB port, which we think is disappointing. Motorola told us that it opted for the Micro-USB over a USB-C port because prospective users would likely have other Micro-USB cables at home which would make their lives easier.

Our G8 Power Lite sample came in the Royal Blue color, which gives the plastic rear case a nice dark to light blue gradient color. However, the plastic does feel decidedly cheap, and feels quite hollow when you tap on it.

The downward firing speaker is also located on the rear panel, which is really quite annoying when you’re doing anything with the phone in your hand – games, videos, even phone calls on speaker become quite muffled. 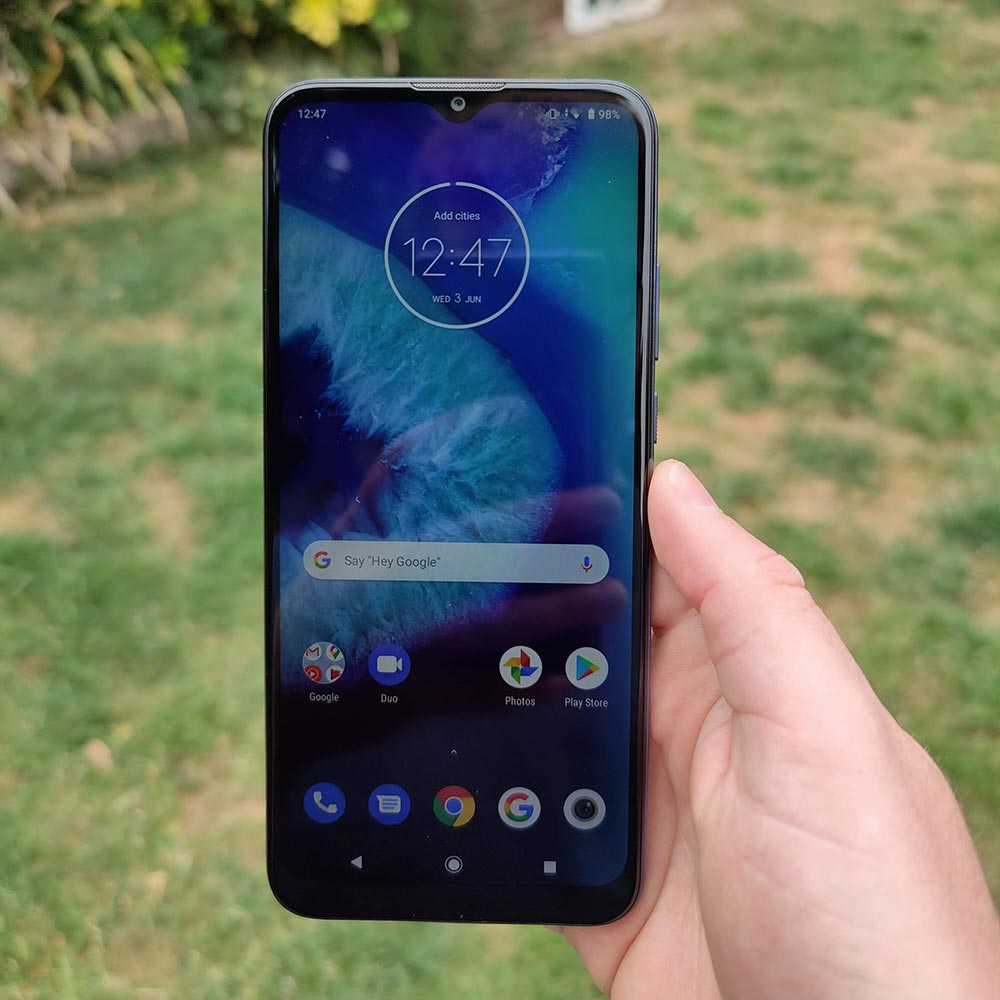 Images from the rear cameras seem dark and washed-out. Plus, with regular shots, the camera has a hard time identifying which part of the image to focus on. The macro lens doesn’t fare any better – it’s slow to focus, and struggles with remaining in focus. The depth sensor lets you take bokeh effect shots, and again, focusing is an issue. We often found that, towards the edge of the photos, the bokeh effect simply stopped working.

Images from the front camera aren’t any better. There’s an overall smoothness to the photos, and often they appear over-exposed.

But, for a $175 phone whose raison d’etre is having a long battery life, can we really expect great photos? Probably not. 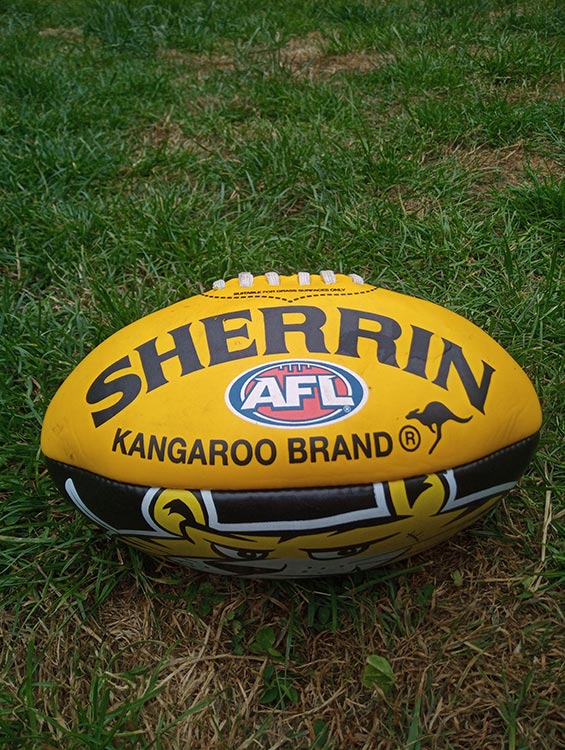 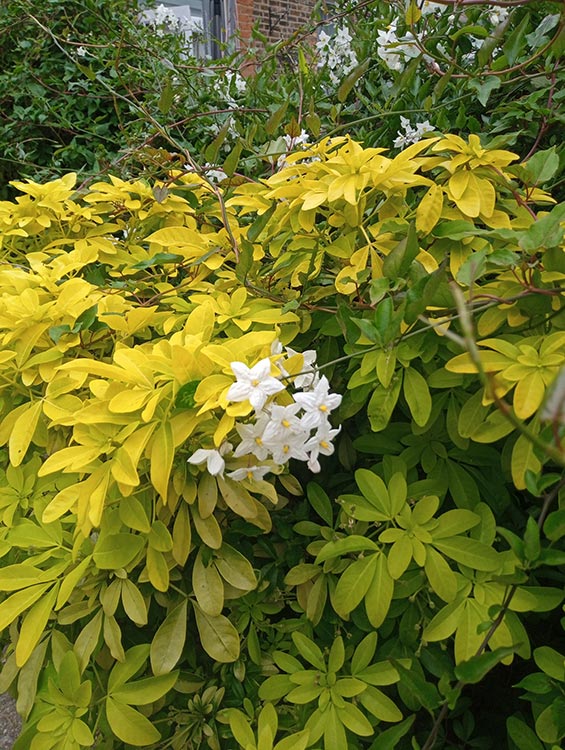 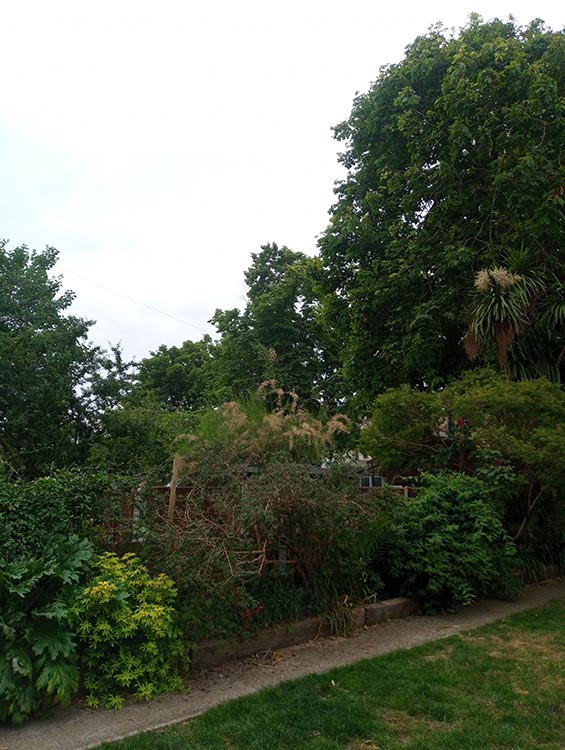 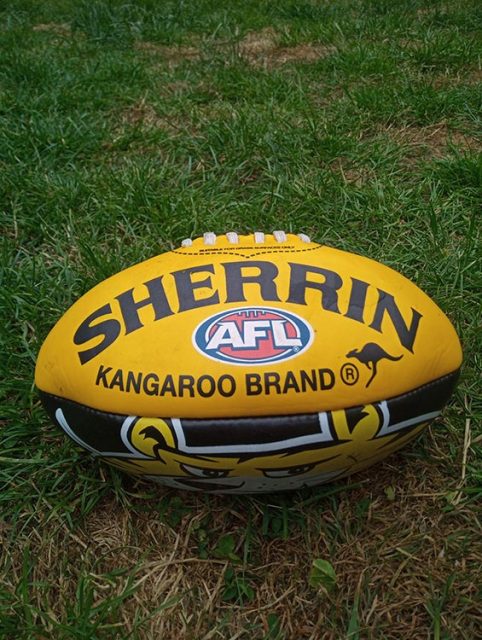 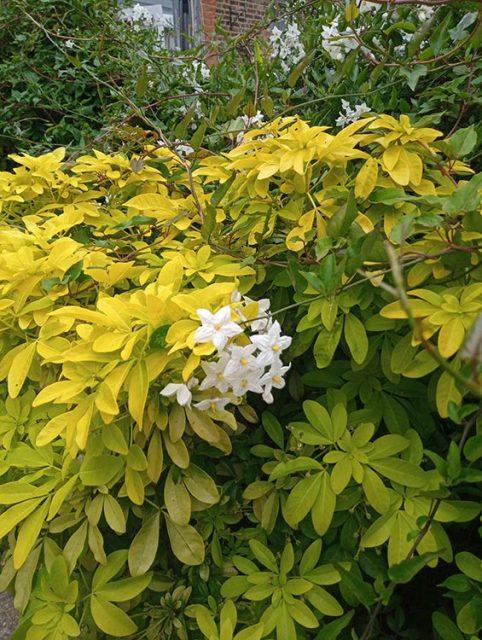 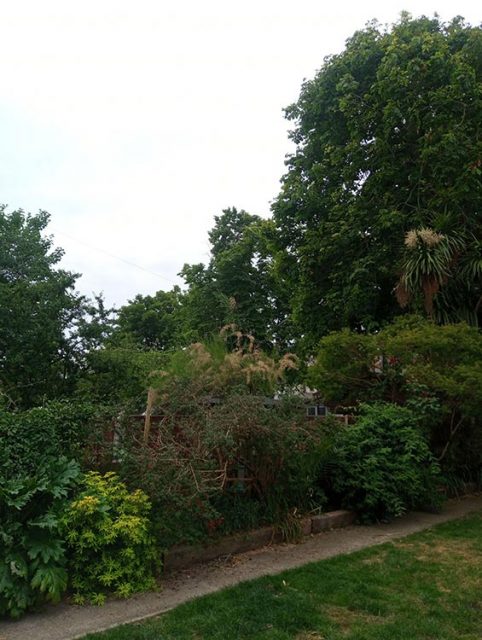 Our biggest sticking point with the G8 Power Lite is its performance – or rather, the lack thereof.

The G8 Power Lite uses a MediaTek MT6765 processor with 4GB of RAM. It’s sluggish, and opening apps can take an irritatingly long amount of time. Of course, this sluggish performance is part of an effort to extend the battery life further – the MediaTek processor doesn’t put the same strain on the battery that a faster version would.

Our other big problem is that the G8 Power Lite is only able to run Android 9. Now, that shouldn’t have a distinct effect on the performance, but it does mean that you’re missing out on some features, such as a system-wide dark mode and an upgraded adaptive battery system. 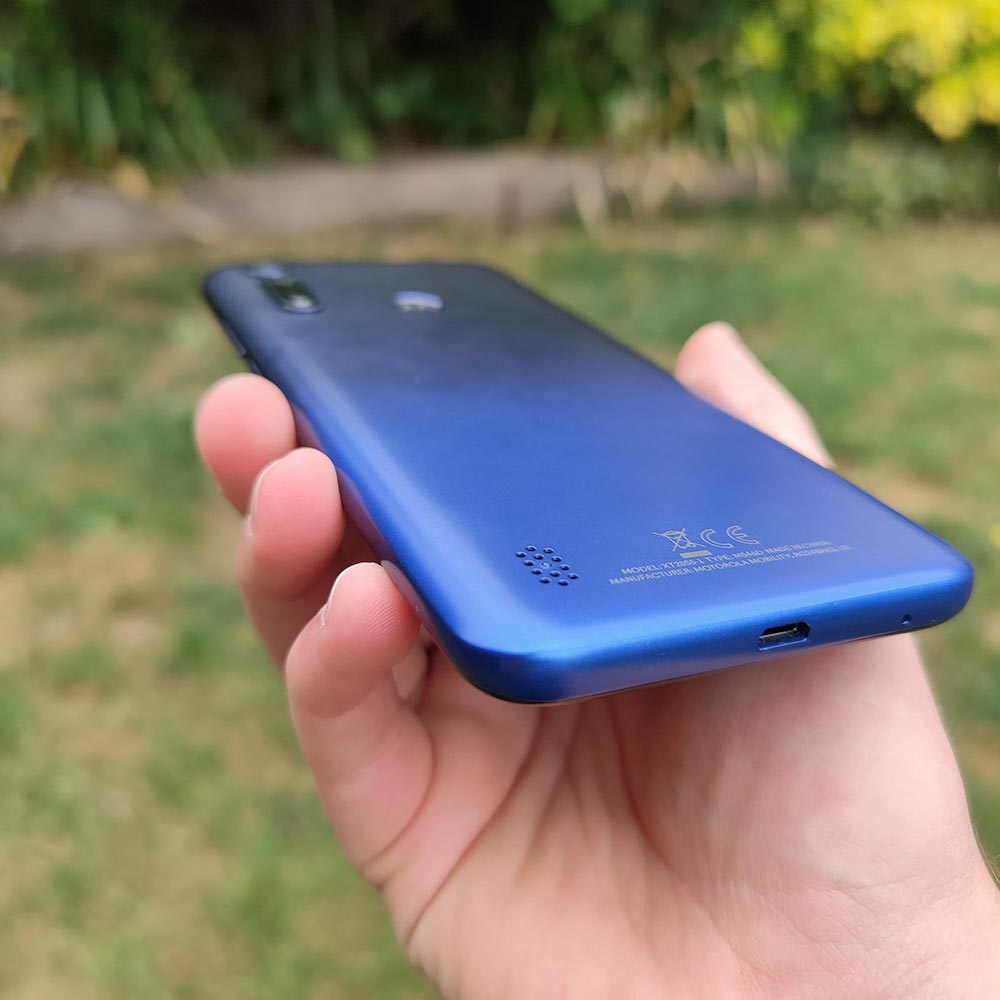 At $175, the G8 Power Lite is a cheap phone. However, that doesn’t necessarily mean it’s good value for money.

We think that, for just $75 more, the G Power is a much better option. Its performance is faster, its screen is sharper, its cameras take better photos, and it feels like a better product all-round.

Of course, if battery life isn’t your only concern when it comes to buying a new phone, there are plenty of better alternatives to the G8 Power Lite for around the same price.

For $250, the regular Motorola G8 is a brilliant cheap phone. Sure, you don’t get the crazy-long battery life, but with slicker performance and software, it won’t be a constant source of irritation.

It’s difficult to find a reason why you’d buy the G8 Power Lite over the G8 Power, apart from the $75 saving. For us, that $75 isn’t enough to justify buying a lesser phone.