It’s near enough impossible to get by without a smartphone these days – so it’s worth having the best phone you can buy. In this guide, we’ll be running through the best phones on the market, what they’re great for, and who they’re best for.

We’ll also explain the specs you should be looking for in a new phone, as well as talking about the brands, operating systems and the best deals you can get on each phone.

Read on for our expert list of the best smartphones

If you're not sure what you're looking for in a phone, find out how to choose the best phone for you.

Which are the Best Smartphones to Buy?

Of course, a simple list can only tell you so much. So read on to find out exactly why we think you should fork out your hard-earned for these phones, in particular.

We’ll explain the phone camera specs, screen quality and speed, amongst other features to help you decide which phone is right for you.

The Samsung Galaxy S10 Plus is, in our mind, arguably the best phone on sale. It's a beautiful phone, with a large, bright, and pin-sharp screen.

However, that beauty is matched by some serious brawn — it uses a market-leading Snapdragon 855 processor and not-inconsiderable 8GB of RAM. Its perfomance is geuinely market-leading, with no discernible slow down when playing intense games or swapping back-and-forth between big apps.

Samsung has also maintained its relationship as a consumer-friendly brand, including a 3.5mm headphone jack, space for a SD card, and even remappable-buttons so you can avoid waking Bixby when you don't mean to.

It is quite expensive, mind. But, you're getting a hell of a lot of phone for your money.

Want to dig a bit deeper into why the S10 Plus is the best phone on sale? Read our full review 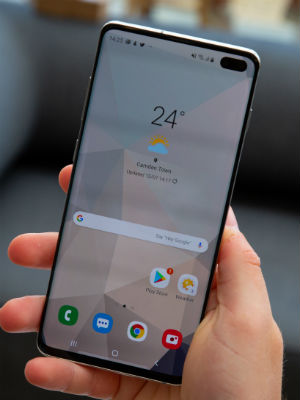 The Pixel 4 XL is a serious step-up compared to last year's Pixel 3 XL. It retains the brilliant cameras but also gets a battery life bump, as well as 2GB of extra RAM and a newer, faster processor.

However, the most expensive Google phone also gets an improved screen with a 90Hz refresh rate screen for smoother, slicker visuals and it's also done away with the Pixel 3 XL's unsightly notch.

With that being said, though, it's not all good news. The Pixel 4 XL has some of the largest bezels on any flagship phone — with an especially large top bezel. Google will content that this is to house the new radar sensor which enables more advanced gesture controls but there's no real compelling use case for this function yet.

What's more, the Pixel 4 XL doesn't have the raw performance to match the other similarly priced phones on the market. With 6GB of RAM and a Snapdragon 855, it's hardly slow, but phones such as the Samsung S10 Plus will leave it for dead when it comes to raw grunt.

There's also the issue of battery life. The smaller, cheaper Pixel 4 has attracted the ire of critics (including Tech.co) for its lacklustre longevity. While the Pixel 4 XL lasts noticeably longer than the Pixel 4, it's still not a match for any of Samsung's latest phones.

The Pixel 4 XL is a great phone but, sadly, you get the impression it could have been an exceptional phone — we'd still buy one, though. 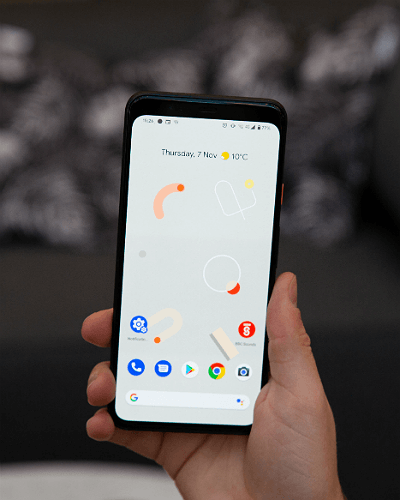 The iPhone XS might not be a huge step forward from 2017’s iPhone X, but it’s still a brilliant phone and one of the best on the market.

It has a brilliant OLED display with beautiful screen quality. At 5.8-inches, it easily fits into the palm of your hand, and is crafted from high-quality glass and metal to make it a truly premium-feeling phone. The XS’ excellent hardware is paired with equally strong software. iOS and the powerhouse A12 Bionic processor means that AR functions are effortless, and the TrueDepth facial authentication is faster than ever.

There’s a bump in audio quality from the older iPhone X, with new stereo speakers offering wider audio playback. It’s also IP68 certified, making it one of the best waterproof phones you can buy. Plus, it’s the first iPhone to offer dual SIM card support. Battery life is decent and you’ll easily get through a day with moderate usage. The price might seem a bit steep to some, but this is a phone you’ll be able to hang onto for years to come.

Click to read our full review of the iPhone XS 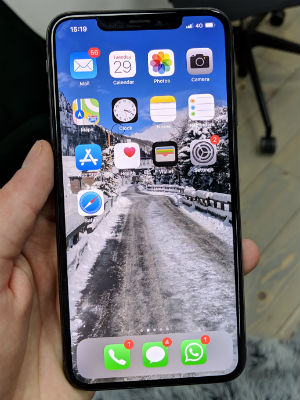 The Google Pixel 3a XL is incredible value for money. For $479, you get the best camera on any phone. That's right, Google has taken the Pixel 3 XL's best feature, and put it on a phone that is almost half the price.

The good news continues beyond the camera as well, as you get a clean version of Android — no Samsung-style bloatware to be seen. What's more, you'll get Android updates as soon as they're available.

Google has had to make some compromises with the Pixel 3a XL, however. It's not quite as fast as many of the other phones on this list and the rear case is plastic, rather than glass. But this is still a fantastic phone at a fantastic price.

Find out more in our full Pixel 3a XL review 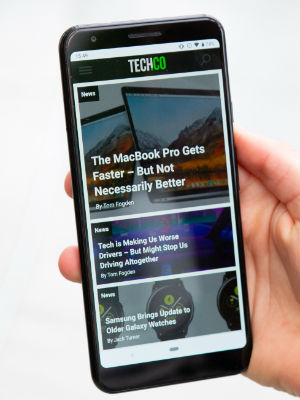 Google Pixel 3a XL
An incredible phone at a bargain price
4.5
In Short

Samsung's S10 5G is the most expensive S10 variant you can buy at the moment, costing a not-inconsiderable $1,299.99. However, it's difficult to argue that it isn't worth the price.

For a start, it actually works on 5G networks — something only a handful of phones can currently claim. However, it also has brilliant front and rear cameras which take beautifully detailed shots — the addition of time-of-flight sensors gives shots an excellent sense of depth.

Its screen is huge, but remains bright and sharp thanks to its surprisingly high resolution and performance from the Snapdragon 855 processor (and 8GB of RAM) is electric. However, the large battery means you're rarely caught short.

Want to know whether you should take the 5G leap? Read our full S10 5G review 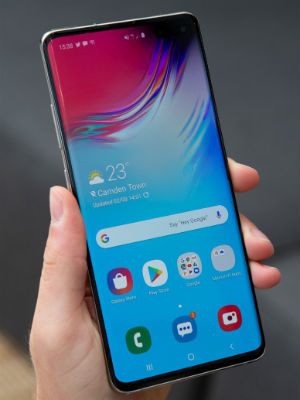 The Google Pixel 3a is like the Pixel 3a XL above, but smaller and even cheaper. That means that you get access to the best phone camera on the market at the moment for a paltry $399. There are phones on the market that cost three times more than the little Pixel 3a that can't compete with its camera.

Like all the other Pixel phones, you get Google's clean version of Android and instant access to the latest OS updates. Like the Pixel 3a XL, it has a slower Snapdragon 670 processor, so it won't be as good for serious mobile gamers as other phones on this list.

It also has a headphone jack, which is pleasing to see, but it sadly doesn't get expandable storage. You'll have to make do with 64GB — although you do get unlimited photo storage with Google Photos.

Find out more in the full Pixel 3a review 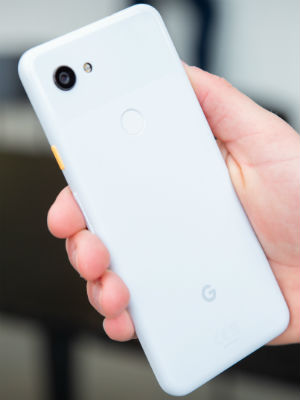 The iPhone XS Max is the largest and most expensive phone Apple has ever released. Its 6.5-inch OLED screen is pin-sharp, and great for watching films.

It uses Apple's blisteringly fast A12 Bionic processor and it has a great set of front and rear cameras — not as good as Google's offerings, mind, but you'll definitely be pleased with the photos you take.

However, it is large, heavy, and very expensive. We'd probably go for the regular XS, but the XS Max is still a very impressive phone.

iPhone XS Max
Big, bold, but lacking the subtleties needed to make it a great phone
In Short

OnePlus is known for taking on big manufacturers with significantly cheaper, but similarly-specced, phones. And, with the 7, OnePlus has managed to pull the rabbit out of the hat again.

For just over $600, the OnePlus 7 packs in the latest-generation Snapdragon 855 processor, excellent rear cameras, a choice of 6 or 8GB of RAM, and hard-wearing Gorilla Glass 6. Most phones with similar spec sheets cost well in excess of $800.

It's not all good news, however. OnePlus decided not to bring the phone to the US — instead only selling the more expensive OnePlus 7 Pro. That's a shame, because it's a great cheap-ish phone. 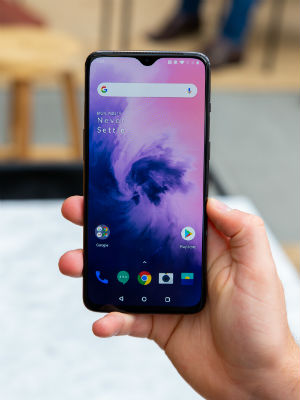 The Moto g7 Plus is one of the best value phones on the market. It costs just $350, but punches well above its price tag with a strong screen, impressive cameras, and decent performance.

It also looks more expensive than it actually is, with slim bezels and a small notch for the front-facing camera. Its 6.2-inch display is plenty sharp and bright enough — despite being an LCD rather than an OLED — and it's great for streaming TV shows or films.

Its dual rear cameras take impressively detailed shots with a good level of contrast. It's not the fastest phone on the market, but it's plenty quick enough for playing lightweight games and flicking through social media apps. Again, it costs just $350. 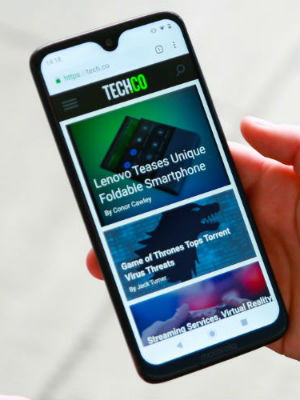 The Motorola One Vision is one of the most interesting phones on sale — it combines an unusual tall design with top-drawer cameras and a surprisingly low price tag.

Its 6.3-inch LCD display has a 21:9 aspect ratio, making it three times taller than it is wide. It also has a punch hole camera, reminiscent of the Samsung S10 series. Its dual rear cameras take excellent, well-lit photos. This is largely thanks to the cameras use of quad pixel technology which combines four small pixels into one big pixel. This increases the amount of light available to the lens, giving you greater contrast and better light management.

However, it's not the speediest phone on the market and its plastic rear case can feel a bit lightweight. But when it costs $350, Motorola had to save money somewhere.

Find out more in our full Motorola One Vision review 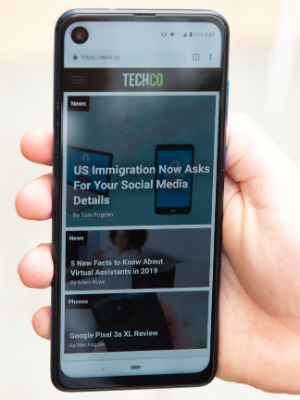 Gallery Click to expand
Buy from Amazon
About our links