This content has not been updated since November 22, 2019. For more recent tech advice for your business, why not try our guide to today's best phone models and brands?

Every year, it feels like we say the same thing. The latest phones from Motorola’s G-series are great, and arguably the best value for money phones on the market. And believe it or not, 2019 is no different. The Motorola G8 Plus is a great phone, and it costs just north of $300. When a phone this good is this cheap, why would you buy anything else?

The Moto G8 Plus has a hard act to follow — last year’s G7 Plus was one of our favorite cheap phones. In fact, we christened it the best value phone on the market. Since then, however, the cheap end of the Android market has become significantly more competitive, especially since Google launched the Pixel 3a. You can't currently buy the G8 Plus in the US, but we're expecting a global roll-out in February next year.

For Motorola, the G8 Plus has two jobs: Convincing people that it’s a noticeable improvement over the phone it’s replacing, and convincing those same people that they'd be better off avoiding the Pixel 3a (saving themselves $100 in the process). So, has Motorola achieved its aims?

In this Moto G8 Plus review, we’ll cover:

While it doesn’t push the boundaries in terms of design, the Moto G8 Plus is an objectively good-looking phone. It has slim bezels surrounding its 6.3-inch LCD display, and the decision to remove the Motorola branding from the chin was a great one on Motorola’s part.

The rear case comes in two very attractive colors, as well – you get a choice between cosmic blue or crystal pink, both of which have a gradient design, with the main color becoming darker towards the top of the phone. Our cosmic blue sample wasn’t quite as dramatic as, say, a Samsung Note 10 Plus, but the more restrained colors are still brilliant – especially when they catch the light in the right way.

In truth, we only really have one misgiving about the phone’s design – the rear camera bump is
large. We’ll cover the cameras more in a later section, but the top lens, separated from the two other lenses, is a dedicated wide-angle video camera. The actual lens is bigger than you’d expect, and it is noticeably more protruding than any of the other lenses. It’s a small flaw and not a deal-breaker, but it is annoying on occasion.

As ever with Motorola’s G-series devices, you get a headphone jack and space for a microSD card. Plus, you get a USB-C fast charger – far from a given at this price point.

The screen, however, is a slightly more mixed bag. It’s a 1080×2280 resolution panel, and while it isn’t bad, it won’t win any awards. Static images look great, but as soon as you start scrolling or watching videos, a general softness takes over the screen as colors bleed into one another. We’ve seen far worse screens on similarly priced phones, however. 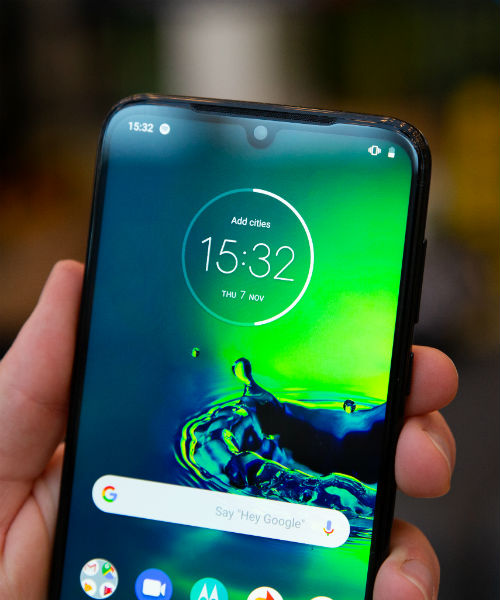 As we mentioned above, the G8 Plus has three rear cameras – although one is designed solely for video usage.

The video camera in question is a 16Mp ultra wide-angle lens. At first, it can feel slightly unusual having exclusively wide-angle videos, but as Motorola was keen to point out when launching the G8 Plus, it makes it a viable action camera replacement.

In practice, the videos are pretty good, if not remarkable. The images are pretty stable thanks to the wide-angle lens, and pick out details well – particularly in the foreground. Moving between lighting conditions can lead to over-exposure, with light sources becoming abnormally bright for slightly too long. Still, for a $300 phone, it’s not bad at all.

The photos from the G8 Plus, on the other hand, are strong all round. Colors are bright and pronounced thanks to the relatively wide f/1.8 aperture from the 48Mp wide angle lens, while the 5Mp depth sensor ensures that focusing is quick and generally fuss-free.

If we had one criticism of the cameras, it’s that light sources – the sun, for example, or street lamps – can become overblown, and almost create a silhouette of the object you’re focusing on. This is something that Motorola could probably address with a software update, so watch this space.

All told, though, the G8 Plus has an enviable set of snappers for a phone that costs just over $300. It’s not quite at the same level as the Google Pixel 3a, but you’ll struggle to find anything that runs the Google phone this close.

The Moto G8 Plus uses a Snapdragon 665 processor, and has 4GB of RAM. It’s far from the quickest phone on the market, and we did notice some juddery apps and even the occasional app closure while using it, but it’s nothing too severe.

While the raw performance might be nothing to write home about, the same can’t be said for the battery life.

Motorola increased the size of the battery for the G8 Plus, and now claims a 40-hour battery life under normal usage. Normally, battery life claims are ambitious, but in the case of the G8 Plus, it totally lives up to the marketing. During our time with the phone, we found that it could easily last well over a day-and-a-half.

Motorola prides itself on providing a fuss-free version of Android, with minimal bloatware – and that’s exactly what you’re getting with the G8 Plus.

Aside from Google’s own phones, this is as close to a stock version of Android as you’ll find. While this might sound like a minor point, in practice it means that you won’t have any problems navigating around the G8 Plus, nor will you find your storage wasted because of unnecessary apps.

You do, however, get the choice between the classic Android three-button navigation or a gesture-based one-handed mode. The one-handed mode works in a similar way to the latest Google Pixel 4 series – you swipe up to return home, while swiping up and holding will bring up your recent apps. However, we’d stick with the three-button approach, as it works much more reliably. 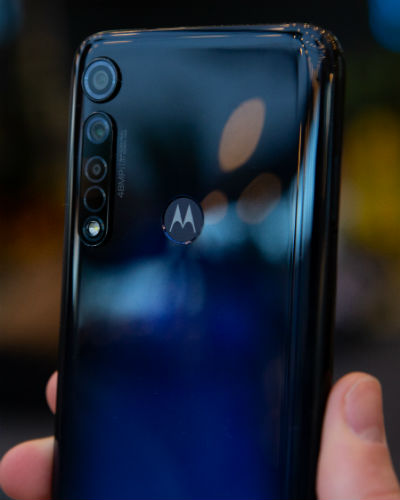 The G8 Plus is, frankly, exceptional value for money.

It has impressive cameras, fantastic battery life, and strong enough performance, while costing just $300. At that price, it’s undoubtedly one of the best phones on the market. However, for $100 more, you can buy the Google Pixel 3a, which has even better cameras, a better screen, and is made of better-quality materials.

Unless battery life is your biggest concern, we’d probably choose the Pixel, given its better cameras and build quality. However, we’d still be very happy with the G8 Plus.

If you’re looking to save money on a brand new phone, you can’t do too much better than the G8 Plus.