This content has not been updated since January 2020. For more recent tech advice for your business, why not check out our reviews of the Motorola G10 and G30.

Update: Motorola has now revealed the pricing for the Razr flip phone and, yep, it's expensive. You can buy it from Verizon from January 26 for $1499.99 or for $62.49 per month on a two-year contract.

Motorola recently announced that it was resurrecting the iconic Razr flip phone from 2004 (yes, it really was 15 years ago), bringing it up to date. We've now had some hands-on time with the new Motorola Razr to find out whether it can live up to its namesake.

Here's the lowdown on the new Razr. It has a 6.2-inch folding display which is entirely housed within the clamshell design. It also folds completely flush and has a smaller screen on the outside. However, compared to phones such as the Samsung Galaxy Fold, Motorola has taken a different approach to the foldable screen concept. In effect, the Razr takes a normal-sized phone and makes it more compact and portable, rather than hides a tablet-sized screen within a normal phone design.

So, has Motorola struck gold with its new folding phone design? Is it a rival for the Galaxy Fold? And – crucially – is it worth over $1,000? 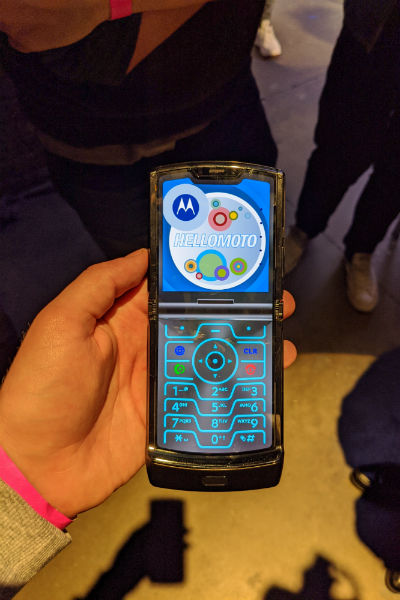 Motorola Razr – How Does it Feel?

While we're loathe to compare the new Razr to the Samsung Galaxy Fold, given their entirely different design philosophies (something Motorola is keen to point out), we didn't have the same ‘wow' feeling trying the Razr as we did with Samsung's troubled flagship.

However, that might not be such a bad thing. Instead of feeling like a completely new interpretation of a mobile phone, the Razr feels like a thoroughly normal phone that happens to fold over to make it smaller when not in use.

In fact, the Razr truly feels like a well thought-out product from an engineering point of view.

The new ‘teardrop' hinge, for example, ensures that the two sides of the screen fold completely flat and flush with the large bottom lip. Plus, while you can feel a slight depression in the screen around the hinge, it's nowhere near as deep nor as visible as the Galaxy Fold's infamous crease.

The screen itself is a 6.2-inch plastic OLED panel with a 2142×876 resolution and a 21:9 aspect ratio. In practice, those numbers mean that the screen is tall and relatively sharp. We've seen much better screens on phones this year (including on other folding phones), but it's far from bad.

When you fold the Razr over, you'll find a smaller 2.7-inch glass screen on the front. This screen is reserved only for Android's pull-down settings menu. This means you can use the small screen to control music, and for checking and quick-replying to notifications. Again, it feels better thought-out than the 4.7-inch front screen on the Galaxy Fold — Motorola seems to have recognised the limitations of the form factor and worked with them, rather than against them. It does, however, collect fingerprints like no other phone screen we've seen.

One surprising aspect of the Razr's design was just how heavy it is. Given the Razr's reputation as a slim, light phone, we were taken aback when we found out the phone tips the scales at 205g – for reference, that's heavier than a Samsung Note 10 Plus. That weight is likely due to the hinge, which features three stainless steel plates beneath the screen. These ensure that dust stays out and that the screen stays flat.

All told, the Razr feels like an innovative take on smartphones, with a pleasing nostalgia-nod for good measure. 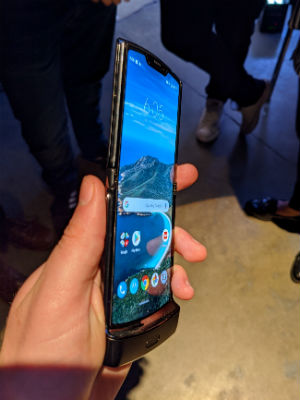 While the overall device feels impressive in the hand, the range of specs Motorola revealed did leave us slightly worried about how it'll perform out in the real world.

For starters, the Razr will use a Snapdragon 710 processor — not the fastest Snapdragon 855 or 855+. Motorola claims that the 710 will have enough oomph to get the job done. Plus, the slower, less-hungry processor should help alleviate concerns about battery life — the Razr has a very small 2,510 mAh battery. As we've seen with the recent Google Pixel 4, lacklustre battery life can be enough to damage a phone's reputation from the go.

However, Motorola claims it has done extensive real-world testing, and found that the Razr should have enough in the tank to get by and then some. Motorola executives also pointed out that the small front screen means that users won't have to open the main screen as often for checking notifications, which also preserves battery life. Should you be caught short, though, the Razr does have 15W USB-C fast charging.

The Razr also has three cameras – one main rear camera that sits on the top half of the phone, plus two cameras that sit above the big screen, with one lens reserved for video. The main rear camera is a 16Mp unit. There's no fancy ultra wide or telephoto lenses here, but it does come with a depth sensor for portrait mode shots, as well as two different autofocus sensors. When the phone is folded shut, you can also use this lens as a selfie camera. We didn't get a chance to really dig into the cameras at the launch event, but we've been impressed with Motorola's recent camera efforts, so we're expecting big things from the Razr.

As far as pricing and availability goes, you'll be able to pre-order the Razr in December before a main release in January 2020. It'll cost you $1,500 in the US and €1,599 in Europe. You'll also get a full two-year warranty – such is Motorola's confidence in its new hinge design. 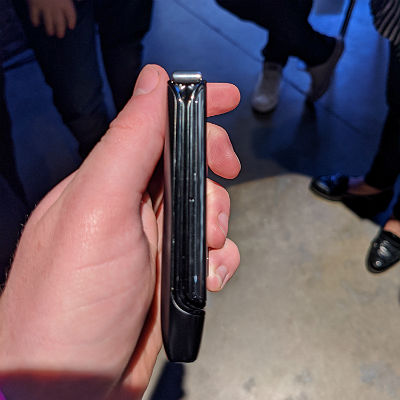 So, is the Razr a good foldable phone, and should you buy one? At the moment, all we can really say is that we're impressed with Motorola's decision to take on Samsung and Huawei, and also for having the confidence to try a new way of solving the folding phone conundrum. Is it likely to be the best phone on the market when it's released? Probably not.

That the screen isn't at least a 1080p panel feels irritating, and we're yet to be convinced entirely on Motorola's battery life bravado. With that being said, the Razr will definitely be one of the most interesting phones on the market, and we wouldn't be surprised if other companies try to copy Motorola's approach — imitation is the sincerest form of flattery, after all.