The battle between the latest Apple and Samsung flagship phones feels as old as time, although, really, it’s only been 10 years since the fight commenced. This year, Samsung is pitching its brand new S10 model against Apple’s iPhone XS.

While Apple’s latest iPhone was an incremental upgrade over 2017’s iPhone X, the S10 has ripped up the blueprint set by its S9 predecessor to try and push the smartphone game forward.

So, which is the best phone for you? We’ve already reviewed the iPhone XS (and really liked it) though we haven’t had a chance to get our hands on the brand new S10 yet. So, these aren’t our final thoughts, but an educated overview based on a comparison of the specs and claims. We’ll be sure to update once the S10 itself is released.

When it comes to specs, the S10 has the XS well and truly licked. It’s better almost across the board, with a sharper screen, better cameras, bigger battery, and so on.

The iPhone XS, on the other hand, can only best the S10 with its speedier (on paper) processor.

Samsung S10 or iPhone XS – Which Phone is Best?

Let’s be clear – neither of these phones are bad phones, and they’re both flagship devices. However, the S10’s breadth of abilities really makes it stand above the XS.

Samsung phones are also known for their bloatware – redundant or unwanted apps and features that come baked into the phone that can’t be deleted. For almost every Google app, you get an equivalent Samsung version, even on the latest Samsung phones. This is something that won’t be new to Samsung users, but might come as a surprise for those switching, particularly from iPhones.

However, Samsung phones are also more likely to see price drops compared to iPhones, which will definitely make the S10 a more enticing product as time goes on. According to Amazon price tracker CamelCamelCamel, the Samsung S9 cost $720 when new, but now costs just $590. Meanwhile, Apple iPhones tend to hold their price unwaveringly, until a newer generation is released.

The Samsung Galaxy S10 features some key changes over the S9. For example, the bezels around the edge of the screen are smaller, with the top bezel being replaced with the distinctive ‘hole punch’ camera cut-out in the top right corner.

The S10 also gets three rear cameras, up from just one on the S9. The display, already one of the S9’s best features, has also been upgraded. Instead of the 5.8-inch Super AMOLED display on the old phone, you now get a larger 6.1-inch display, with what Samsung is calling Dynamic AMOLED tech. This new screen tech will make the S10 better at differentiating colors, leading to sharper, cleaner images.

Beyond that, you also get a large 3,400 mAh battery and the latest Snapdragon 855 chip, plus 8GB of RAM. It should be an exceptional phone for taking pictures, gaming on the move or watching videos and movies.

When we reviewed the iPhone XS, we gave it the full five stars. But that doesn’t mean it was quite perfect. The mobile game is always changing, and the Samsung S10 represents a big step forward from the phones that the XS was originally pitched against.

So, what is the iPhone XS great at? It’s incredibly well-built, with a truly premium feel in the hand. Under the hood, its A12 Bionic processor makes it one of the fastest and smartest phones out there. It also has a great front and rear cameras. Plus, iOS is as easy to use as ever.

Perhaps the XS’ biggest problem, though, is its price tag. At $999, it’s $100 more expensive than the S10, and it’s hard to see what it does to really justify that premium.

As we mentioned above, we haven’t had proper hands-on time yet with the S10. However, based on what we know about the iPhone XS, the screen tech being used in the S10 and the display quality of most Samsung phones, we feel confident saying that the S10’s screen is better than the iPhone’s.

The S10 has a higher resolution and a higher pixels-per-inch count than the XS, despite being 0.3-inches bigger than the XS. The S10 also has fancy new Dynamic AMOLED tech, which helps it deal with moving images better. It’s the first phone to support HDR10+, so it should be excellent at dealing with colors.

When we reviewed the Samsung S9, and newer Note 9, we found that the phones’ Super AMOLED screens were some of, if not the best, on the market — and there’s no reason to think that the S10 shouldn’t improve on them. 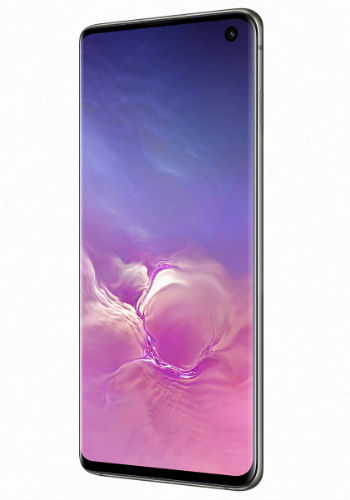 Without proper hands-on time, it’s difficult to call this one. The iPhone XS has great front and rear cameras. When we reviewed the S9 we were impressed with its picture quality, but we couldn’t help but feel that it was hampered by only having one lens.

The S10 rectifies that with a 12Mp telephoto lens for better high-zoom shot, a 12Mp wide-angle lens for most of the everyday shots, and a 16Mp Ultra Wide lens for big panorama and landscape shots. 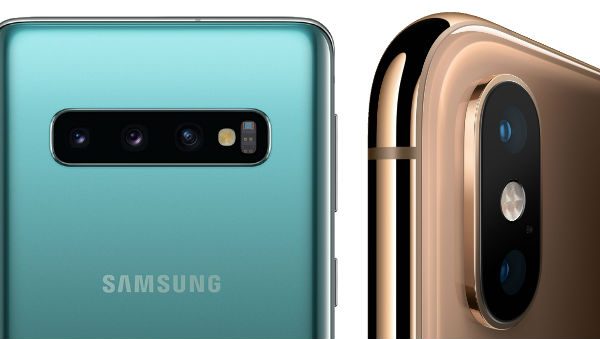 While it’s too close to call on the cameras, the Samsung S10 looks set to storm home with the victory in the battery battle.

Not only is its battery significantly larger (3,400 mAh for the S10 versus 2,658 mAh on the iPhone) but Samsung’s phones also have fantastic battery management tech.

The power saving mode on Samsung phones is capable of eking-out almost twice the battery life and, with the S10’s larger battery, you’ll likely be able to make it through a day-and-a-half of regular use. No iPhone can live with that longevity.

While the S10 gets access to the latest top-of-the-line Snapdragon 855 processor, which promises as much as a 45% performance uplift over the 845, it still can’t match Apple’s own A12 Bionic processor when it comes to outright performance.

The S10 does have twice as much RAM as the XS, though, which should certainly help alleviate performance issues when it comes to multitasking. However, if you’re after a phone for some serious mobile gaming, for example, we’d probably still opt for the XS.

With all that being said, the S10 simply isn’t going to be slow. The 855 chip will be more than capable of dealing with pretty much everything you can throw at it.

So, on balance, the S10 looks to be the better phone than the iPhone XS. It has a more innovative and attractive design, a better screen, a headphone jack and an SD card slot. Plus, it will likely be similarly powerful and have very good cameras.

The best reason to buy the more expensive XS is if you already have an iPhone and don’t want the hassle of switching to Android. If that’s the best selling-point, it sounds like a sad indictment of the latest iPhone. While the XS is undoubtedly a fantastic phone, Samsung has laid down a serious challenge with the far more innovative S10.