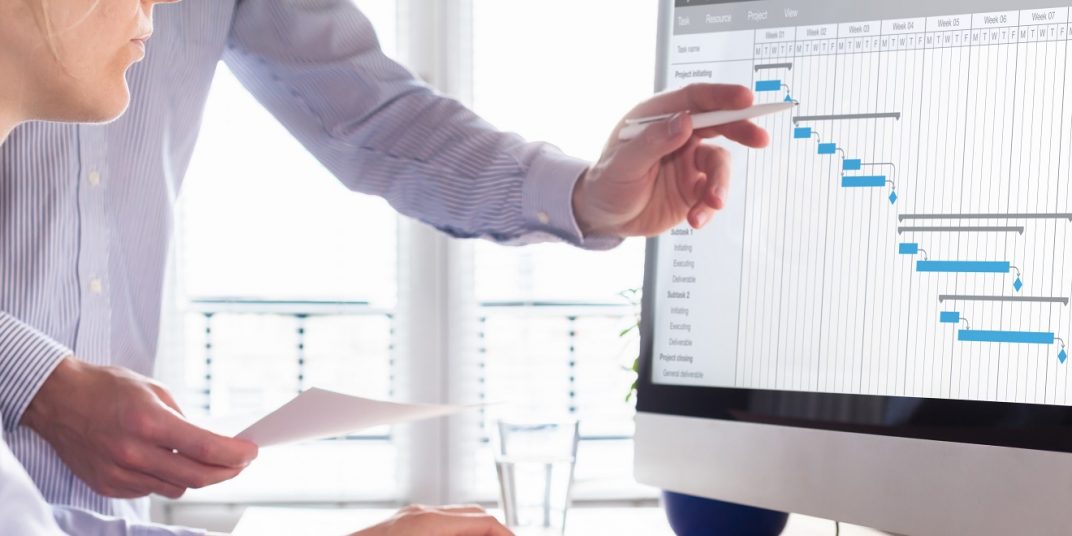 PERT charts and Gantt charts are two different tools, which both allow project managers to keep track of tasks and monitor project delivery.

This guide will take you through all the key differences between the two chart types, break down the benefits of each, and explain how to create them.

PERT and Gantt charts are used for the same purpose – visualizing project progress from beginning to end – they just present information in different ways. This is how each one is defined:

Gantt charts lay out information in a linear fashion, with the X-axis (horizontal) usually divided into equal units of time (e.g. weeks) and the Y-axis (vertical) usually divided by the different tasks the Gantt chart creator needs to monitor. Below is an example of a Gantt chart made with Wrike, one of the best project management software programs we've reviewed on Tech.co so far.

PERT charts, on the other hand, are a bit less rigid in their design – usually, they’re loose diagrams or flow charts. Unlike traditional Gantt charts, a PERT chart typically displays tasks in boxes along with their completion times, and arrows can be drawn between them to represent dependencies.

Gantt Charts were first invented in the 1910s by Henry Gantt, an American mechanical engineer and management consultant. This means Gantt Charts predate traffic lights, commercially frozen foods, and electric razors – not something that can be said for other tools typically found in project management software!

PERT Charts are a little younger – they were created by the US Navy in the late 1950s. PERT stands for Program Evaluation Review Technique.

What Are the Benefits of a Gantt Chart?

Gantt charts are included in almost all project management software packages, because they’re one of the most useful tools available to help project managers communicate entire timetables to their team. Benefits of a Gantt chart include:

What Are the Disadvantages of a Gantt Chart?

First and foremost, Gantt charts can be long, arduous, and complex to set up – however, this drawback is often remedied by efficient and easy-to-use project management software.

But there are other issues to do with the Gantt chart's design. For example, it's not always clear what a given project's critical path is, and it's not easy to designate which tasks are priorities and which ones are less important. It's also more difficult to show the interdependence between tasks in the same way as one can on a PERT chart, as there's not much room to add information that could aid understanding.

Another disadvantage of Gantt charts is that they won't help project managers or team members visualize exactly how much work needs to go into a certain task, just the time it's predicted to take.

What Are the Benefits of a PERT Chart?

Although maybe not as widely used as Gantt charts, PERT charts still have their uses. Benefits of a PERT chart include:

What Are the Disadvantages of a PERT Chart?

PERT charts aren't without their disadvantages. For one, the more complex your project becomes, the more complicated your PERT chart will get. A huge web of interconnected tasks with lines zigzagging all over the place can become difficult for team members and project shareholders to digest.

On a related note, PERT charts aren't very flexible – it's not the easiest thing in the world to make modifications to a complex PERT chart once you've set out an initial order of events.

Although it's useful to understand your project's critical path, sometimes PERT charts can overemphasize the importance of following a plan very strictly – you might not, for instance, account for delays to tasks that aren't on the critical path, even if they're important.

Should I Use a PERT Chart or a Gantt Chart?

Both types of charts are useful for teams working on projects – it’s just about knowing the right time to use each one.

Use a PERT Chart for Project Planning

One way to get the most out of both formats of the chart is to involve them at different stages of your project. PERT charts will be most useful in the project planning stage and will give you a good overview of the tasks in your project and precisely the number of other tasks that are directly linked to them.

If you kickstart your project without a sufficient understanding of which tasks are dependent on others to be completed, it’ll quickly become chaotic, and you’ll find yourself spending more time picking up loose ends as you move towards your deadline.

Use a Gantt Chart for Project Delivery

Gantt charts are more regularly used once a project is actually underway. They offer not only an accurate timeline of an entire project, but also an estimate of how long it will take to complete each task.

This can be useful if you have external shareholders eager to view your project’s progress, or if you’re managing a team that requires a clear, succinct overview of the project and all its constituent tasks – which would be harder to achieve with a PERT chart. Gantt charts are also much easier to amend, so you can make changes to your project as and when you see fit.

Use a PERT Chart for a Project Overview

PERT charts are great tools for understanding exactly how long it’ll take to complete a project. Making use of the PERT Formula (O + (4 × M) + P) ÷ 6) discussed earlier will mean you can kickstart your project with accurate information on timing.

After using the formula to guide your timeline assembly, you'll be able to see the quickest path you can take to completion by identifying the tasks in your project that will affect the deadline – this, again, is the critical path.

Gantt charts are less useful for this because (depending on the duration of your project) the graph’s X-axis on your bar chart may continue off the side of the page you’re viewing it on, so it’ll be harder to see your project from start to finish.

Use a Gantt Chart for Task Organization and Project Clarity

PERT charts can include information about task duration, but it’s a lot easier to see how long tasks take in the Gantt chart view than it is on a PERT chart.

Plus, PERT charts can get increasingly complicated if you continue to add task dependencies – especially if a project is already underway – whereas Gantt charts are a bit more flexible and easier to amend if you need to alter something.

Overall, Gantt charts offer a much clearer way of viewing information relevant to tasks that need to be completed within projects. And ensuring all team members are on the same page about what needs to be done – as well as what's been completed already – is crucial to a project's success.

How Do I Create a PERT or Gantt Chart?

If you wanted to, you could technically create both of these charts with a pen and paper. However, you'd have a pretty hard time amending them if the need arose – and they wouldn't be particularly easy to share with remote employees half way across the world.

You could also create either chart in Microsoft Excel, but importantly, Excel lacks important project management features which means it's rarely used in this way. What's more, you'll have to input a lot of data from a lot of different sources to make an Excel chart accurate and useful.

The best type of program for making easily amendable Gantt charts is project management software. The bottom line is this: it's much, much quicker to make a Gantt chart with software that provides a dedicated feature for doing so – and because Gantt charts are so useful for tracking the progress of all kinds of projects, they're included with almost all the best Gantt Chart software.

Some project management software will even automate the entire chart-making process for you if you've already created tasks or inputted relevant information into other fields within the program.

PERT charts, on the other hand, become increasingly less useful the further into the actual project delivery you get, so not a lot of project management software programs have a function that will allow you to make them. However, some project management software providers, like monday.com, have an online whiteboard feature – functioning much like a normal whiteboard – that you can create PERT charts with.

monday.com came out on top during our testing, but be sure to check out all the top providers below:

A PERT chart is a flow chart or diagram that's useful for visualizing the progress of a project over a planned time period.
There are various advantages and disadvantages of both charts. Gantt charts are clear, simple, and great for keeping track of your project once it's off the ground. They help project managers ensure everyone is kept in the loop, and can be modified or altered during a project if tasks end up taking longer than expected. PERT charts are more useful during the planning phases of projects, as they're more difficult to amend but are much better at showing the interdependence between specific tasks within a project than Gantt charts are.
Both Gantt and PERT charts are used to track project progress, so their importance to any organization planning or executing a project cannot be understated. Project managers will refer to them on a daily basis during planning (for which PERT charts are more suitable) and delivery (for which Gantt charts are more suitable). Bot charts play a crucial role in making sure that all team members working on any given project know exactly what they're doing, and when it needs to be done by.