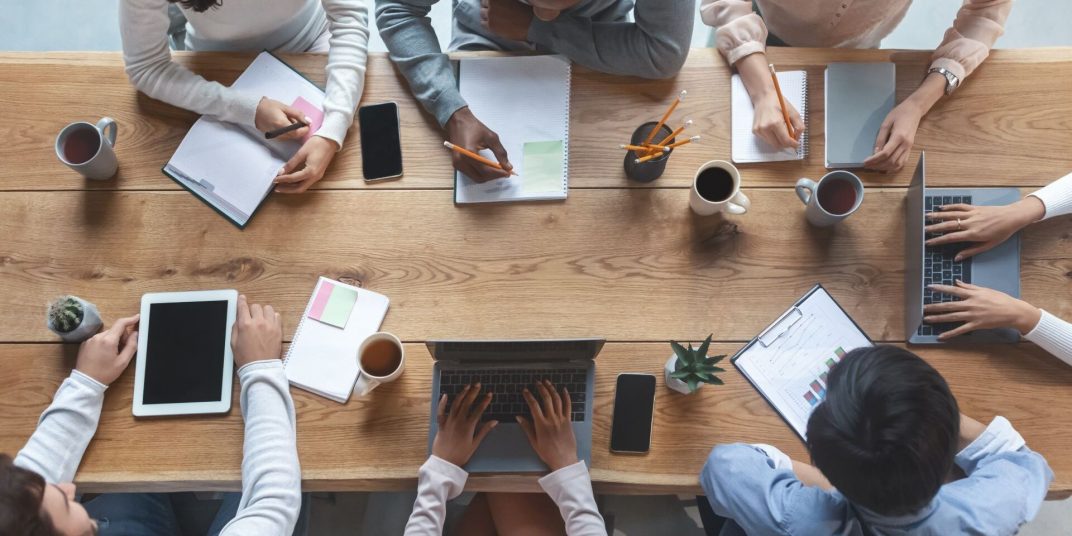 Scrum is a project management methodology that can be used to organize teams during project planning and delivery, in which projects are split into smaller groups of tasks typically completed by teams in one to four week “sprints.”

This guide will run through everything you need to know about the principles of scrum in project management, why they’re important, and how they can improve your team’s performance.

“Scrum” as a term in project management was first coined in 1986 by Hirotaka Takeuchi and Ikujiro Nonaka when they compared their new method of product development to a rugby formation known as a “scrum.” As we mentioned above, it involves splitting up projects into smaller groups of tasks typically completed by teams in one to four week “sprints.”

In Rugby Union, players form a scrum several times a game. In scrums, players form tightly bound units of eight players and fight for a short-term goal – possession of the ball after a restart.

Scrum differs from other agile methods like kanban, which is a more fluid and continuous way to manage a team's workflow. Scrum emphasizes rigid, structured bursts of focused work.

The scrum method was initially deployed in software development spaces, but its utility is now recognized by teams across various industries and acknowledged by the best project management software. Since its inception, however, the scrum method has been underpinned by six key principles that shape the project process:

The 6 Principles of Scrum

As we mentioned above, the scrum methodology centers around six key principles that can be used to sculpt the workflows of your team. The six principles are: Empirical Process Control, Self-Organization, Time-Boxing, Value-Based Prioritization, Iterative Development, and Collaboration.

Importantly, these are different from the five scrum values – Courage, Focus, Commitment, Respect, and Openness – which we'll cover later on.

This principle is the first and most important principle underlying the “scrum” method, and is actually made up of three sub-principles that should guide you when implementing it. The three key aspects of Empirical Process Control are:

In the context of scrums, the principle of self-organization is key to ensuring that team members take responsibility and ownership for the project they’re working on.

In theory, a highly self-organized team can go about their business without much input from managers, taking the initiative to get on with the tasks that need completing most urgently. The key thing about self-organization is that it makes team members care – and the bigger a team's emotional investment, the more likely they are to see success.

This principle also affects assessment – self-organizing teams can be critical of themselves and the team’s performance without the need for input from leadership.

Time-boxing is a part of the scrum method in which strict time limits are enforced in various ways throughout a project. Most of the time, this means running “sprints” – one to four-week periods of intense focus on a single task or collection of tasks. Some teams sprint for slightly longer, others for shorter – it really depends on what product or service you're developing.

“We shifted our team to a sprint format at the end of last year to test if we could increase productivity and promote collaboration by all coming together to work over a six-week period,” explains Campaigns Manager Alec Chambers, who recently introduced sprint cycles to his team.

“We're nearing the end of our second sprint cycle, and there are early signs that it's really helped to foster a better team spirit, promote decisive action, and encourage quick problem solving due to its time-bound nature,” he added.

But it's not just for sprints – implementing time-boxing wherever you can, including in meetings, will ensure that your project stays on track for its delivery date.

Prioritizing the completion of the right tasks in the right time frame is a key part of every working person’s life, whether they’re in the midst of a project or not.

However, teams implementing the scrum method prioritize value overall – specifically, by trying to create the maximal business value in the shortest amount of time. This is all about delivering the highest quality product or service as quickly as possible.

Whilst other project management philosophies include the concept of value-based prioritization, it's a driving force behind all the action in scrum teams – there’s no time to lose, especially when you’re instituting time-boxing in tandem with this type of organization.

“Iterative” projects are broken down into smaller chunks, or iterations, such that one large project becomes a series of smaller subprojects that are easier to focus on. These are the “sprints” in scrum.

The “development” part of this phrase refers to what teams can learn from each sprint/iteration, and how those lessons can then be applied to future iterations, creating a constant cycle of improvement.

In a related sense, iterative development allows project stakeholders – especially ones that don’t have a clear, unmoving conception of the end product or service – to make changes midway through projects.

The final core pillar of the scrum approach is collaboration. It’s vital that all team members working on a project are aware of what others are working on, and have a close relationship with the project stakeholders, who ultimately need to be satisfied with the end product.

Collaboration is distinct from other related concepts, like cooperation, in that collaboration relies on the collective inputs of multiple team members and the mutual development of such ideas

Collaboration is distinct from other related concepts, like cooperation, in that collaboration relies on the collective inputs of multiple team members and the mutual development of such ideas – cooperation simply means working on the same project (in what could be very separate capacities).

To aid collaboration and ensure everyone is on the same page, scrum teams use scrum “boards” to visually represent where the team is at in a sprint cycle, what work needs to be done, and various other factors.

What Is the Scrum Process?

Now you’ve understood the key principles of scrum, we can go into a bit more detail on the process, as well as some of the tools that scrum teams typically use to complete projects.

Scrums have key characteristics that make them what they are – it’s not simply the process of getting into small teams and performing “sprints.” A typical scrum cycle will include:

Managing work within a scrum is aided by three key “artifacts.” These are:

There are also two other tools scrum leaders will use that aren't technically “artifacts” but are just as important to project success: 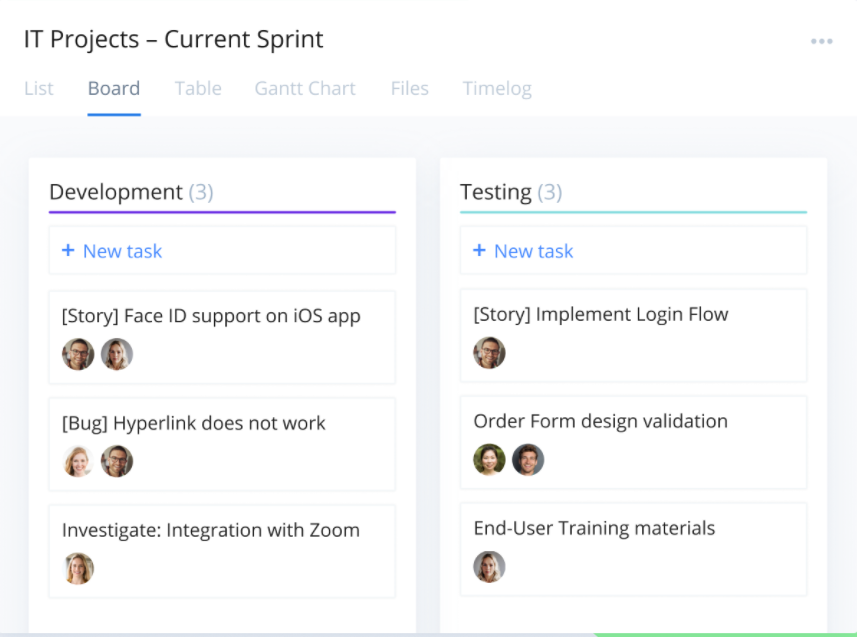 In addition to the principles that guide the structure and progress of scrums, there are also scrum values that should be present throughout your work. These are:

These five values are key to success because they ensure that the members of any given scrum feel valued, included, and supported – which are the foundations needed to make everyone feel comfortable and thus able to innovate, take risks, and ultimately work well.

The utility and flexibility of the scrum principles and values – as well as that of other agile workplace management methods – has pushed their relevance far beyond the industry they were originally designed for. In 2020, Capterra found that IT & software teams only made up around one-fifth of all teams using agile workplace management methods. Among the other teams, 5% were in healthcare, 10% were in education and 5% were in the entertainment/media industry.

In order for scrums to be maximally efficient, team roles need to be clearly defined. There are various roles within the typical scrum team – and there will sometimes be specific roles depending on the industry – but here we’ll just highlight the ones broadly found in every scrum team.

The scrum master is effectively the project leader, or at least the leader for a specified sprint – they are the glue that holds the team together, ensuring everyone is able to collaborate with maximal efficiency. Some jobs the scrum master may undertake include:

These are just a few examples of the numerous duties that come with the scrum master role – but in a nutshell, this person is very much the conductor of the orchestra.

However, it’s important to remember that a project manager and the scrum master are not necessarily the same thing, even though it’s not uncommon for both roles to be occupied by the same individual.

The product owner (or service owner, depending on the type of project you’re scrumming down for) is another important, predefined role, tasked with extracting the most business value from the scrum team.

Product owners have a clear vision for what needs to be developed, and work closely with the development team to make it happen. They will have the best understanding of the customer a given team is developing a product or service for. While the scrum may deliver the value, it is the product owner that defines precisely what the value is.

While the scrum may deliver the value, it is the product owner that defines precisely what that value is.

Product owners also have the important responsibility of managing the various stakeholders who have an interest or investment in the project. In situations where scrum teams are releasing work regularly (e.g. updates for an app), the product owner will play a central role in managing these releases.

The rest of the scrum is considered the “development team,” who together have the required skills for the project to succeed. Development teams are supposed to be transparent, and communicate regularly with the product owner and scrum master.

How to Manage a Project With Scrum

Now that you're familiarized with the principles of the scrum method, there's just one question to ask: What kind of software will actually help me implement this in my teams?

Fortunately, managing a project underpinned by scrum principles has never been easier, because some of the best project management software packages available offer scrum management tools that will help you facilitate scrums.

Monday.com, for example, has easy-to-use burndown charts, whereas Wrike offers online scrum boards. But that's not all they do – these providers, as well as a number of others that Tech.co has reviewed, provide additional features like kanban boards, Gantt charts, and data visualization tools.

The most important thing to remember about project management software is that it'll save you precious time and money, especially in the long run.

There are also providers like Zoho – which has a project management software package as well as a suite of other useful business software programs – that provide scrum-focused software. Zoho Sprints includes scrum boards, agile reports, backlog and release management, and a host of other features to make scrumming simple and easy.

The most important thing to remember about project management software is that it'll save you precious time and money, especially in the long run.

In scrums, efficiency and constant improvement are key. But regardless of what method you're using, it's always a good idea to invest in software that will help you manage your project processes, track progress in great detail and collect data along the way.  Below are the best project management software packages, ranked by how well they performed in our tests: