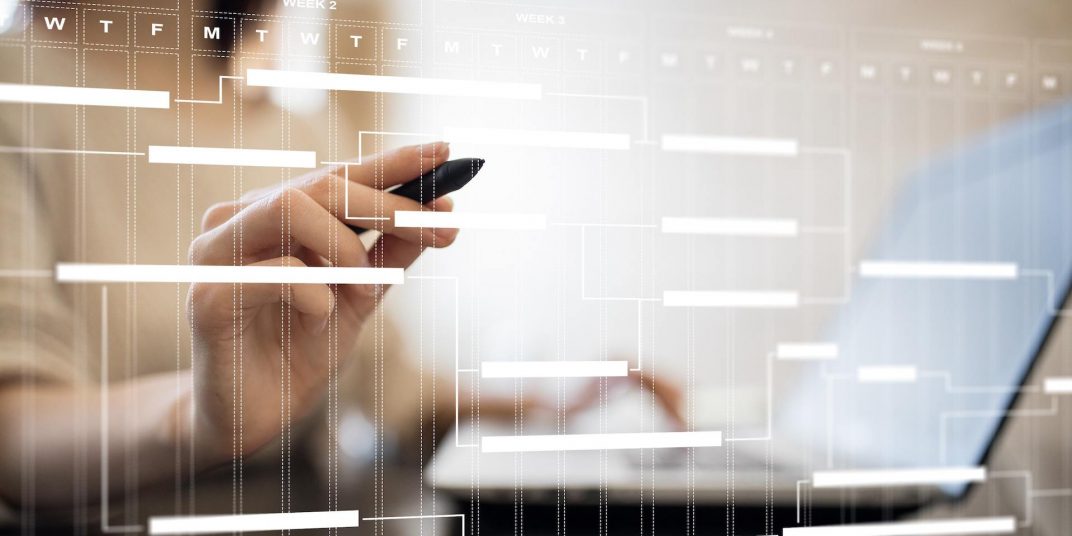 There are many project management methodologies for keeping track of team plans and progress, and no single answer for which is best — the various kinds work effectively for different workplaces and projects. For example, if your team is dedicated solely to a specific task that needs completion, you'll want to use the Waterfall methodology, offered by providers such as Wrike. But if your team is doing various tasks at once, you'll want to use a methodology like Kanban, offered by monday and Jira, or Critical Path, offered by Smartsheet.

If you're feeling more confused than ever at the sound of each of these methodology names, don't worry – we'll explain what each means below. Alternatively, you could skip the jargon and follow the crowds straight to a 30-day free trial for popular provider monday.com, which offers Kanban and Critical Path methodologies which are suitable for a wide range of business types.

As employees work from home now more than ever, it's a borderline necessity for businesses to invest in project management software. In an office environment, although it's not the most efficient or productive method, teams could still get away with physically checking in with each other to see project progress. But in the virtual and hybrid world, this has become difficult.

Project management software allows businesses to visualize the progress of their work easily, accurately and from anywhere. These visualizations can come in multiple different forms, known as project management methodologies. Let's dive into the different kinds.

What Are the Main Project Management Methodologies?

While there are several project management software platforms, there are only a handful of methodologies. This makes choosing a methodology quite simple, since you don't have too many options to assess. Once you have chosen the right methodology, you can work out the best-fit software for your team to use, suitable to your working style and goals.

The main methodologies you'll need to consider when looking at project management software are: 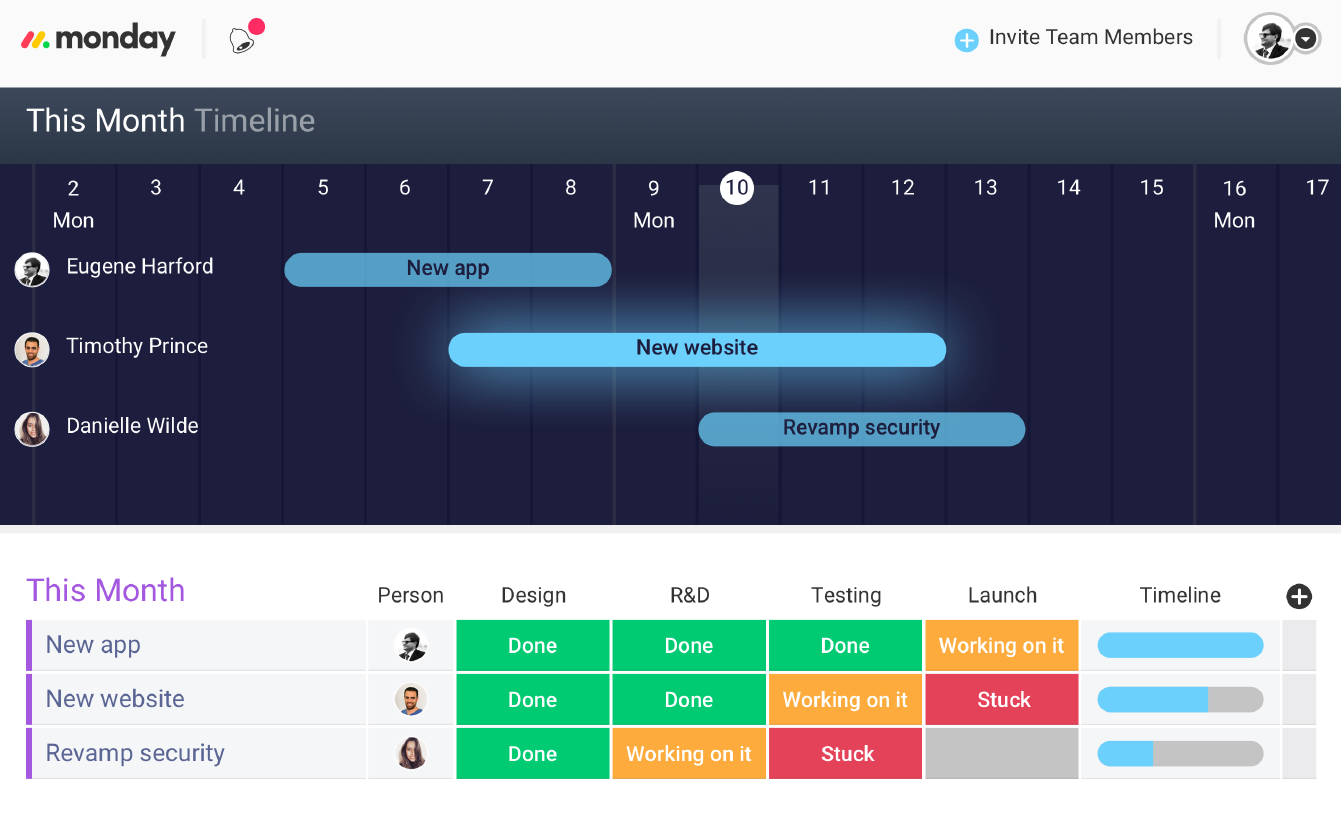 Not sure which methodology is right for your business?

See if one of the most popular solutions available could work for your business, with a no-strings-attached 30-day free trial.

Sometimes, no matter how long a project is taking, a business or its clients like to see results as soon as they can. This is where an Agile approach can come in handy, as it allows you to take a large project and break it into sections based on priority.

As an example, imagine you're putting on an art show for a rich client, displaying 50 pieces throughout a gallery. But instead of showing all of the brand new art at the gallery's debut, you instead showed each piece of art to the client as they were finished, and had them approve of each piece as they came.

This can be an effective method of ensuring customer satisfaction, as rather than viewing an entire product when it's finished, and potentially having numerous problems with it, they'll be able to work alongside you in order make sure they approve. However, this can leave the end date of the entire project in a bit of a nebulous state, and the periodic output may be less satisfying to both your customer and your team. 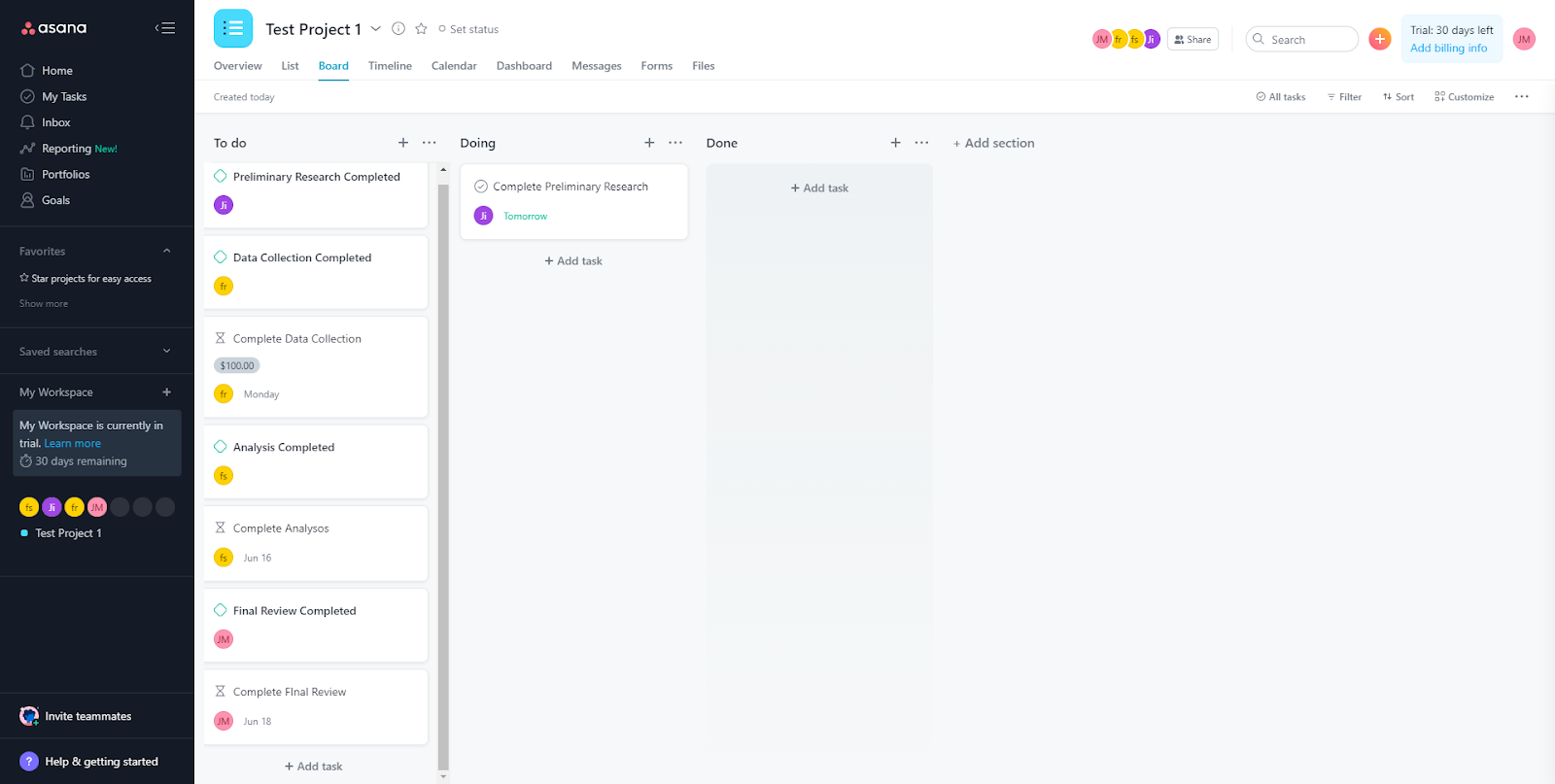 Scrum is closely related to Agile, as it's more of a subset than an entirely different beast. Firstly, a team takes the Agile approach of breaking down a large task into smaller goals. But rather than addressing the tasks together, they're then delegated to different team members.

A cornerstone of the Scrum method is frequent meetings, which typically happen daily. This can be frustrating to team members who feel busy, or who think that the meetings aren't necessary. And much like Agile, the lack of a concrete end date or final product can make the entire process feel a bit more nebulous.

Jira is known to be great for software development teams, so here's a look at what a scrum layout would look like on their platform.

Kanban – Best for Multiple Tasks at Once

Advantages: Allows multiple tasks to be tackled at once
Disadvantages: The board can look complicated and overwhelming
Best software: Trello, monday

Before the pandemic, many businesses would document their project progress physically, using sticky notes on a whiteboard. This method is effectively replicated through the Kanban methodology, which allows multiple tasks to be tackled and tracked at once.

A good example is if you were running a graphic design firm. Any new commissions would be placed in the “New” column, being moved to the “In Progress” column by whoever takes the job. Then, when a project is done, it can be put to bed in the “Finished” column. Obviously this is one of the simplest examples, but it's a general idea of how Kanban works.

While this is one of the more popular methodologies, it does have its weaknesses. When multiple projects are in full swing, the board can become very overwhelming to look at, and your team will need to make sure it's updated perfectly in order for it not to be confusing.

Below is an image from Trello's Kanban board.

Scrumban – Hybrid of Scrum and Kanban

Advantages: Takes the best aspects of Scrum and Kanban
Disadvantages: As of yet, slightly undefined
Best software: Backlog

As its name might imply, Scrumban is a combination of the Scrum and Kanban methodologies. Scrumban is essentially a Scrum approach that includes a Kanban board.

The Kanban board can eliminate the need for daily meetings, as progress will be laid out in front of everyone. However, these are still a good idea, as it allows your team to communicate problems or share more intricate information.

As this is a somewhat newer approach, the exact rules behind Scrumban are a bit less defined than a standard Scrum or Kanban methodology. This can lead to people taking creative liberties to fill holes that may end up backfiring.

Here's what a Kanban board would look like in Backlog.

This is the simplest project methodology out there, and it suits a simple project work path. If your business is working on a single task with multiple steps, where each step needs the former to be completed first, this is the methodology for you. Waterfall methodology is often pictured in delivery phases in a Gantt chart and PERT charts are more common in the planning phase/s.

However, this can be an unfit method for businesses who like/need to engage in tasks that require flexibility or the reworking of previous steps – they may prefer Agile over Waterfall. Going back to our example, if the ship was nearly complete, only for someone to notice a problem with the hull, it would be devastating to have to go back and fix it from step one.

The below is an example of this methodology from Wrike.

Critical Path is very similar to Waterfall. In fact, it's basically just Waterfall but for more complicated tasks. Critical Path is still made up of various tasks, but their sequence is less “one after the other” and more “this step comes after these two independent steps, but must not be done after this step.”

Using our ship-building comparison from Waterfall, Critical Path would lead to a more specific and minute approach. For example, in order for the ship to be completed, we need to build the parts, like the mast, hull, and deck separately. However, these processes would each involve their own steps, which would then all meet up at the end when putting the ship together.

However, this methodology can become complex to the point of confusion if not handled correctly. Like Waterfall, an early mistake can be disastrous if not caught at the time, and seeing the web of events and projects can be overwhelming for some, especially if the project is on the bigger side.

Here is an example of Critical Path from monday.com. You'll notice it looks very similar to Waterfall.

Which Project Management Methodology is Right for Your Team?

If only the question was this easy! As we mentioned in the intro, there is no single ideal project management methodology for every business. At best, there's a methodology that will suit each business type. To recap, these are:

One of the most popular choices in 2021 is monday.com, which offers a user-friendly Kanban and Critical Path solution suitable for most business types. If you're looking for somewhere to start, you can't go far wrong with a 30-day no-strings-attached free trial.

The biggest three are Agile, Kanban, and Waterfall, as they all fit different niches. Waterfall is great for a project that's essentially a straight line, allowing teams to check off milestones as they go. Kanban is perfect for a larger project that can be broken down into smaller independent goals to be taken on by a team. Finally, Agile is good for any teams that like to produce results quickly, showing off every achievement as they come rather than at the end of the entire project.
Reading this article is a good way to get an idea of what methodology might work for you and your team/business. However, if nothing has jumped out at you, the next best step might be experimentation. Many popular providers, such as monday.com, offer a free plan to try.

Try out some of the methods that appealed to you on some less time-sensitive projects, and then ask your team for feedback and see which one was the best for their working styles.

There are loads of great project management software platforms on the market. While we have a comprehensive list within our Best Project Management Software of 2021 page, at a glance, our top three are monday.com, ClickUp, and Trello.
Scrum is known to be the best project management methodology for software development. The way a Scrum method will split up large projects, delegate individual tasks, and plan daily meetings is highly conducive to software development.
About our links