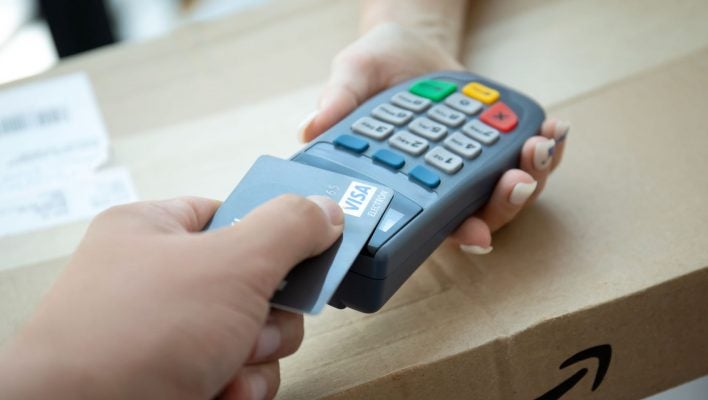 Amazon's reputation for disrupting industries is about to be tested again, as the ecommerce giant is reportedly developing a point-of-sale (POS) system aimed at small businesses that will compete with the likes of Shopify and PayPal.

At this point, Amazon is infamous for their ability to pivot to new businesses. Its acquisitions of Whole Foods, Twitch, and Ring, to name a few, consistently send shockwaves through the business world that have a long-lasting impact on other businesses in those markets.

Now, the POS market is about to feel the same pressure, with Amazon's plans to create its own POS likely making more than a few POS business owners worried about their future.

According to a report from Business Insider, Amazon is in the process of developing a POS system. The project, dubbed Project Santos, was created by an internal Amazon team with the specific purpose of competing with POS giants Shopify and PayPal.

While there is limited information out there, the report from Business Insider did state that the POS system will have online and offline capabilities, and will be able to connect to Amazon services like Prime and Flex, making the checkout process that much easier for customers and employees alike.

This shouldn't come as too much of a surprise to those familiar with Amazon's brick-and-mortar goals over the last few years. Whole Foods have already begun implementing the Just Walk Out technology that allows for a cashier-less experience. A POS to go along with it could position Amazon to make a big impact on the physical store space in the future.

What Does this Mean for Your Business?

If you're a retail business, this doesn't mean much… for now. Obviously your current POS systems aren't just going to stop working because Amazon talked about getting into the industry. Down the line, you'll likely have the option to switch over to the Amazon POS, but there's nothing to immediately concern yourself with at the moment.

If you're a POS provider though, you're probably already feeling a bit of panic. Industries are known to take a serious hit whenever Amazon jumps into the fray, and its ability to elbow out the competition is well-documented.

Still, this report explains that Amazon is very much in the early stages of getting a POS off the ground, so you'll have plenty of time to develop your technology to try to compete with the world's richest man.

Getting Started with a POS System

If you're in the market for a POS system, tragically the Amazon option won't be available for quite some time, but you can opt for one of the dozens of great options available right now.

Our research shows that Vend POS, Square POS, and Shopify POS are the best options available on the market today. They are easy to use, offer plenty of features, and won't break the bank. Some of them even offer free hardware, but they do come with transaction fees, so be sure to do your research before deciding which one is best for you.

If you want to do a bit more digging, we've collected a bunch of POS systems in this table below to give you a better idea of how they match up. Take a look and feel free to grab a quote for your business today.