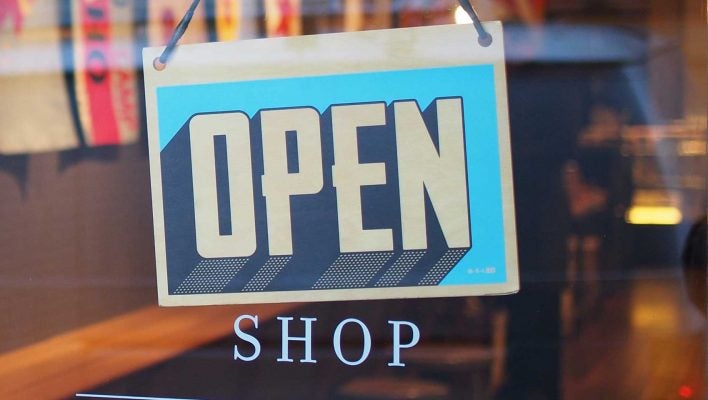 “The longer that lockdowns and restrictions are in place,” says Dax Dasilva over Zoom, “the more [reopening] gets delayed, the more we've been able to support new customers.”

You seldom hear CEOs of major international companies being so bullish about their business during one of the sharpish global economic downturns in history, but Dasilva radiates positivity.

On the back of surprisingly strong quarterly earnings for his point of sale business, Lightspeed, Dasilva was keen to talk about the changing nature of retail and what it means for both his company and your local retailers.

Lightspeed is one of the biggest point of sale companies in the world and is growing rapidly. Less than six months ago, the company spent almost $1 billion buying rivals Upserve and ShopKeep. But, according to Dasilva, these efforts are aimed at keeping Lightspeed local.

“[Acquiring] ShopKeep increases our retail presence in the US, and Upserve is for hospitality in the US,” says Dasilva. “It gives us two teams and two sets of technologies that we can integrate into what we already have. We want to have strong teams in those markets to capture all the businesses moving over from legacy systems, or opening.”

For Dasilva, this is where Lightspeed really shines.

“What we're doing is to democratize technology to give small and medium-sized businesses a competitive advantage”— Lightspeed CEO, Dax Dasilva

“These local businesses can't be at a technology disadvantage,” he says, “so we have to keep them ahead. If we build our own payments, we're going to be able to roll-out more functionality that has payments interlinked. We can roll-out suppliers that have these big data advantages that they never had. If we roll-out omnichannel [solutions], they're going to be great in-store and great online. We know this complex SMB segment so well that we've been able to anticipate what's going to be super high value for them and start to build it.”

As well as acquiring rival companies, Lightspeed has been finding ways to expand its own offering with a new integrated payment processing service and a Supplier Network.

“It was super important [to have Lightspeed Payments built it] and we learned that through COVID,” says Dasilva. “A lot of the innovations that we rolled-out that allowed businesses to transact with their customers, given the restrictions, were all built around the fact that we have Payments integrated into the solution. We can innovate and build software and payments together.”

The close integration allowed Lightspeed to be lighter on its feet than many competitors as the global pandemic took hold.

“We're not looking at some other separate company that we've got to work with,” says Dasilva. “We've got our own payments stack, so that when you have features such as curbside pickup, or contactless payments, or digital wallets, or order ahead, we were able to rapidly deploy them because we have Lightspeed Payments. Almost everything that we shipped during COVID was omnichannel and workflow-related, and was enabled by the Payments stack.”

The Supplier Network, on the other hand, allows Lightspeed to be far more aggressive in certain markets. It functions as a closed business-to-business network, which allows brands to pass product information and enable ordering for retailers from within the Lightspeed platform.

“The Supplier Network has been a long-term ambition for the company,” says Dasilva. “When you're deeply integrated between an independent merchant and a supplier, you can give value to both. That unlocks data advantages, workflow advantages and a seamless supply chain that a big ecommerce giant has for itself.”

Does that mean that Lightspeed is looking to challenge big ecommerce giants?

Dasilva pauses for a moment before beginning. “We're not competing with Amazon directly,” he says, “but what we're doing is to democratize technology to give small and medium-sized businesses a competitive advantage. We don't compete with Amazon but we're helping these businesses compete, be relevant, and be the local stars.”

But can a company listed on the New York Stock Exchange, which readily swallows up competitors genuinely consider itself a democratizing force?

“From our perspective, working in the complex SMB and POS sector, we see a need for consolidation,” Dasilva says. “We've been a consolidator now and are pretty active in bringing companies together that are similar to us. It doesn't make sense for ShopKeep, Upserve, and Lightspeed to be building separate platforms when we're really serving the same kind of customer.”

“I think there's more consolidation in this cloud era,” he continues, “which has then been accelerated by COIVD. Ten to fifteen years ago, there were a lot of local systems and it didn't matter. But, when everything's in the cloud, there's way more technology infrastructure, it's not just a cash register any longer.”

“I've seen [consolidation and acquisition] be a real engine for innovation,” Dasilva says. “I think we're a great acquirer and, you know, we're an acquirer of choice for many companies. There's a way for expertise and technology assets to be brought together in the world of cloud, so that should bring more innovation and it should being richer teams with richer perspectives and backgrounds.”

Lightspeed's aim to help small businesses operate easily and efficiently has rarely been more important. The global pandemic has destroyed many businesses and any help they can get in switching to online sales channels and joining forces to provide a bulwark against growing giants such as Amazon must, surely, be welcome.

Are you looking for the best retail POS system for your store? Lightspeed excels at managing inventory and sales for barcoded products.
Try Lightspeed for free
Share this post
Did you find this article helpful? Click on one of the following buttons
We're so happy you liked! Get more delivered to your inbox just like it.