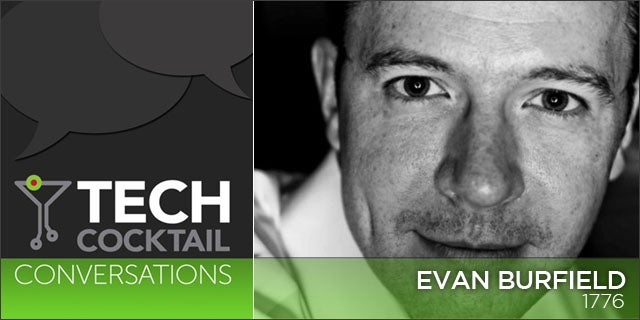 Since beginning my work for Tech Cocktail, I've learned a lot about various tech startups and the inspiring entrepreneurs behind them. More notably, though, is the amount I've learned about the entire startup ecosystem. Being based in DC, I've inevitably learned about Evan Burfield and his role in cultivating DC's startup environment.

With roots in the DMV (having graduated from Thomas Jefferson High School for Science and Technology), Evan Burfield himself started and ran a successful enterprise wealth management system company prior to his studies at Oxford. Since returning to the District, Burfield has made numerous contributions to the the DC startup community. He's chairman of Startup DC, leading the Startup America movement in the nation's capital, encouraging startup growth with initiatives like K Street Capital and Reboot America. On top of this, Burfield is the cofounder of DC-based incubator 1776.

While there have been some very recent critiques about the role of 1776 as DC's tech startup “hub,” there are many more opinions that support Burfield's assertion that 1776 plays an active role in helping and connecting members of the tech community in Washington. Since the opening of 1776 earlier this year, the coworking and incubator space has seen major developments, with plans to offer classes focused on digital skills, launch an accelerator program in the fall, and even organize a global startup competition in DC.

Burfield thinks that DC has the potential to be one of the top startup communities in the nation; it just comes down to whether tech innovators can learn to fully utilize all the assets that the Washington ecosystem offers.

Watch Burfield talk about the DC tech startup community and what we should expect to see from it in the near future. Here's the video.

Tech Cocktail Week is a monthly series of events that takes place downtown Las Vegas and is produced in partnership with Tony Hsieh’s Downtown Project.