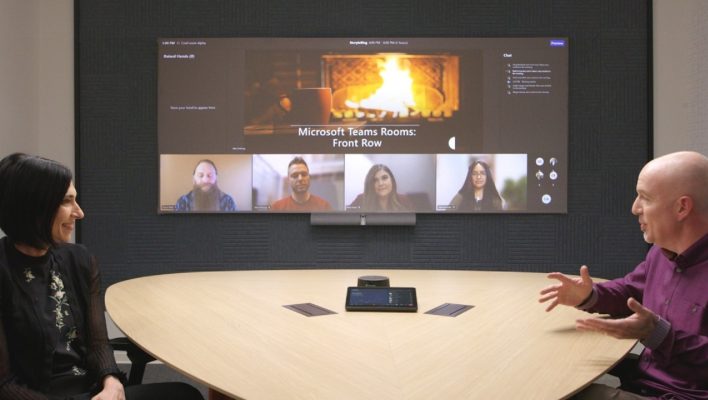 Originally announced last year, Microsoft has started rolling out ‘Front Row', a feature that it hopes will provide a solution to hybrid meetings and blur the lines between remote and in-person gatherings.

The biggest difference with Front Row is the way that participants are displayed. People are placed in a row, with everyone at the same level, to try and recreate the feeling of sitting across the desk from someone.

It might only be February, but we expect plenty more updates to Microsoft Teams in the near future, including more improvements to Front Row, as hinted at in Microsoft's latest announcement.

How Does Front Row Work in Microsoft Teams?

While remote and hybrid working has seen a meteoric rise in the number of people using web conferencing platforms in the last two years, it's fair to say that many of us still experience annoying niggles and awkward moments when using Microsoft Teams, Zoom, or others.

One of the pain points is hybrid meetings, where some participants are in the office and others are dialling in remotely. That's where Front Row comes in, with Microsoft claiming it has introduced changes to make these meetings more enjoyable and natural for all.

With Front Row, remote participants are visualized in a gallery, with video feeds in a row, at eye level. This means that everyone on the call, and in the meeting room, are ‘face to face', in theory leading to a more natural meeting. In addition, now everyone in the meeting can view the chat at the same time.

“One of the most striking pieces of front row is the gallery. When we're all in a physical room together, you don't have people stacked on top of each other in a grid format. As I look around a Teams Room with front row, it doesn’t matter if people are in-person, or remote; everyone is on the same eye level, and it just feels very natural.” – Greg Baribault, Program Manager, Microsoft Teams Devices

There's no need for special equipment to use Front Row – the feature automatically scales to the size and number of screens you are already using.

Front Row, which is available as of now for Teams customers, is a good start for bridging in-person and virtual meetings, but it seems that Microsoft isn't done yet, with plans to introduce more features soon.

Firstly, Microsoft wants to blur the lines even further, and make it feel like everyone is in the same room. In order to do this, it will introduce shared backgrounds for everyone, similar to Together mode.

Then there's positional audio, which will replicate the effect of a person sitting in the room by generating the sound of their voice from their position. Suppose someone on the right of the screen starts talking – their audio will come out of the right speaker.

The pandemic has created many new trends, but among them, the rise of web conferencing has had a huge impact on businesses, allowing many to keep communicating and retain a sense of ‘normality' during remote working.

Of all these platforms, Microsoft Teams has never really taken its foot off the gas when it comes to improving its product, and regular updates have become part and parcel of that experience. The Teams of today is a different beast to that of the one from early 2020, and all the better for it.

Teams isn't the only platform in town, although we'd argue that it's one of the best. If you want to see what others have to offer, take a look at our top picks for web conferencing software: