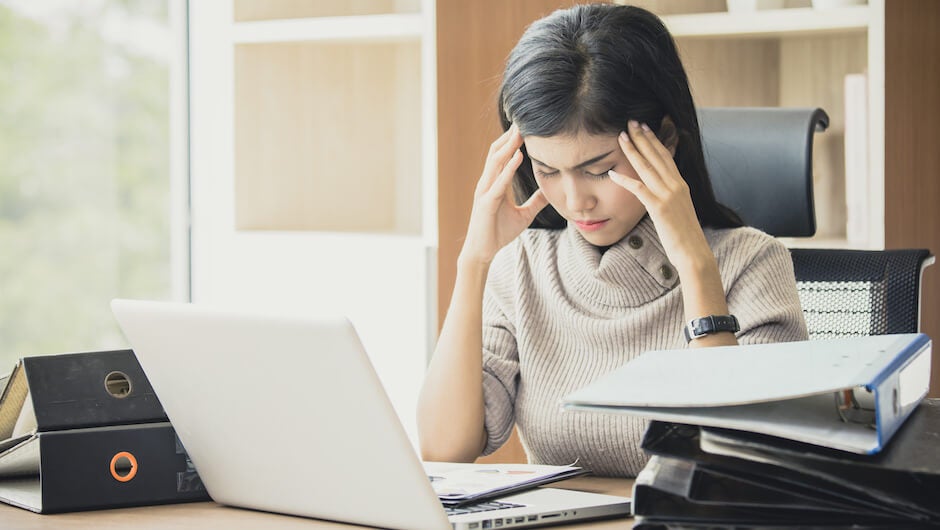 Your head hurts and your eyes itch from looking at screens all day. Your back aches from leaning towards your laptop for work. And you can't go more than 20 minutes without nervously checking your smartphone for updates. A good night's rest might help, but you can't get that either, because the light from all these devices is keeping you up. From a health standpoint, technology clearly isn't doing you any favors – and there are studies to prove it.

From established health organizations to prominent universities, studying the potentially negative effects of technology on the human body has become a popular endeavor. And it's unfortunate news for everyday users. Doctors, psychologists, and technology experts are arguing that all of these devices are affecting our bodies and mental well-being for the worse.

We've dug through all the research, noted all the ailments and possible causes, and spoken to health experts to get to the bottom of whether technology is really all that bad for you.

The human body has evolved over thousands of years to accomplish a vast array of unimaginable feats. From running cross-country, to swimming across rivers, to actually doing a pull-up correctly, we are built to test our physical limits.

But most of us…don't get to. Due to a daily grind that sees us sat at a desk through a working day, staring at a smartphone screen on our commute, then binge-watching Netflix with our evenings, we're putting all sorts of tech-driven strain on ourselves. And, the positions your body contorts into in order to utilize modern technology could be damaging it.

Put simply, your body wasn't meant to endure these previously non-existent activities. Technology has become part of everyday life at such a staggering pace that our bodies are forced to play catch-up in mere years rather than centuries. And the negative effects of technology are already visible in our bodies today.

Technology's increasing presence in our lives could be having a dramatically negative effect on our eyesight. For one thing, the use of smartphones for multiple hours at a time has significantly changed the way our eyes function on a day-to-day basis.

While the tech in a smartphone display is no worse for you than a television screen or a billboard in Time Square, the problem is that you use them for a long period of time at such a close distance. Which, as we all know, is exactly how everyone uses their phone (and if you're reading this at work on a desktop screen, you may want to lean a little further back from that display).

According to the Vision Council, 80% of American adults are using digital devices for more than two hours per day, along with an additional 67% that use two devices or more at the same time. Subsequently, they found that 59% of American adults report experiencing symptoms of “digital eye strain.”

“With an increase in digital technology, many individuals suffer from physical discomfort after screen use for longer than two hours at a time,” reads the report. “We refer to this collection of symptoms as digital eye strain.”

Symptoms of digital eye strain include headache, blurred vision, watery or dry eyes, sensitivity to light, and plenty of other ailments typically heard in pharmaceutical commercials. Suffice to say, the use of technology is having a troubling effect on our vision. But, that's not the only problem.

One of the most significant negative effects of technology isn't due to digital devices at all, but rather, the sedentary lifestyle they manifest. The need to get up and move around is dwindling by the day. Why go to work, when fast home internet and cloud computing mean you can work from home? Who needs to head out for entertainment when vast movie and video game catalogs are available to stream?

This convenience leads, of course, to less physical movement. And that could be causing more of a problem than we realize.

“They’re not using their hands as much as they were when they had to work in agricultural or manufacturing jobs, or had more physical chores,” said Elizabeth Fain, assistant professor of occupational therapy at Winston-Salem State University, to TODAY. “Now, a lot of jobs are in technology, using technology a lot throughout the day, and most millennials are using smartphones.”

It's not just having an effects on adults either. A study out of Essex University found that children are getting weaker as well, with a suggestion that this is due to the lack of outdoor play caused by the increased use of technology. The report studied a large group of British 10-year-olds and found that, since 1985, arm strength had fallen by 26%, and the number of sit-ups they could do declined by 27.1%. 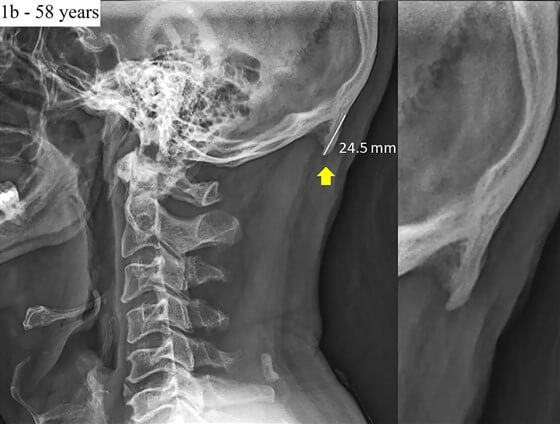 A few weeks ago, a Washington Post story took the internet by storm, citing research that extended smartphone use was giving users “horns” at the back of their skulls. The report in question showed that x-rays of younger adults showed this protrusion more often than older adults – which means smartphones must be to blame, right?

Everyone picked up the outrageous claim, until experts starting speaking out about the ridiculousness of these attention-grabbing headlines. However, the actually study that the report was based on showed that the “horns” – or “external occipital protuberance” – aren't dangerous, and cannot scientifically be connected to smartphone or technology use at all.

“To call this a degenerative change, I think is not helpful, and probably not accurate,” said a bone biologist at St. Vincent's Institute of Medical Research in Melbourne, Australia to CNET. “There's no historical data saying that this is actually something that's just starting to appear.”

Whether technology is to blame for the growth of new, weird bones around the skull remains to be seen. However, the effects of tech on the brain underneath that skull are more troubling.

The repercussions of extended tech use on your mental health are arguably more problematic than the effect on physical health.

Social media, online gaming, and overexposure to the dreaded “blue light” could be wreaking havoc on everything from your sleep cycle to your social circles. Despite occasional eforts from big tech companies to get you to use their products less, the problem seems only set to increase.

Whether you reach for your phone every few minutes in case you've missed a notification, or sleep with it right next to your bed so you can start scrolling as soon as you wake, technology has begun to elicit clear signs of addiction from its users.

“From general observation, technology has clearly caused people to exhibit some degree of addictive behavior, even outside of the usual suspect of social media, like gaming, online shopping, even work emails,” Abraham Ichinoe, D.O. at Mountain View Medical Center, told us in an interview.

The one of the main drivers of technology addiction is social media, which studies have found as a direct correlation to the kind of addictive behavior you see in drug users. Receiving a notification (a like, a retweet, etc.) triggers the “feel good” portion of your brain in a quick-hit way. There's a science behind this reward mechanic:

“Addictive drugs provide a shortcut to the brain’s reward system by flooding the nucleus accumbens with dopamine,” reads an adapted version of Overcoming Addiction: Paths Toward Recover, a report from the Harvard Health Publications.

To make matters worse, neither social media nor smartphone use are considered taboo in the way that other addictive drugs might be. This makes patterns of addiction, or the need for resolution, less obvious. And that's particularly troubling when 93.4% of users admit to spending more time on social media than they mean to.

When it comes to sleep, the data is pretty damning: technology definitely gets in the way of a good night's rest.

Most screen technology we use (smartphones, tablets, laptops) emits a blue light. This depletes your body's melatonin, the hormone that helps you sleep, causing you to stay awake longer and get less rest.

“The natural evening rise in melatonin is not affected by 1 hour of bright screen light, but it is after 1.5 hours,” reads a study from the Sleep Health Organization. “Thus after 1.5 hours of technology use in the evening people report feeling less sleepy. They also do better on mental performance tests and their brainwaves suggest increased alertness.” 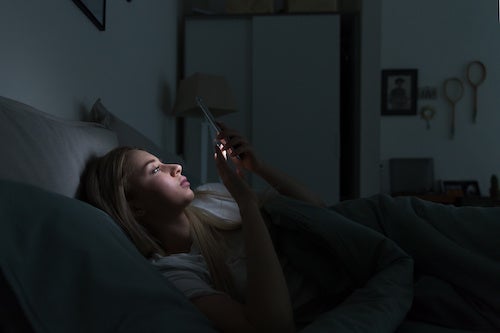 Tech companies are responding to this issue, with most modern smartphones automatically entering into a “warm light” setting after a certain time point in the evening. The latest Amazon Kindle Oasis model also offers this warm light mode, for example.

But, warm light or blue light aside, it's not merely the type of screen lighting causing the problem. It's the amount of tech use just before bedtime that needs addressing.

According to a study from Rasmussen College, members of Generation Y send nearly 56 texts or other messages less than one hour before bed. Other generations are better, but not by much, with even Baby Boomers sending five messages one hour before bed, which could have a dramatic effect on whether or not they're getting the recommended seven hours of sleep per night.

While technology was designed to bring people together, it also has a tendency to do the opposite. Take social media, again. The constant connectedness of friends, family, and random strangers might seem like a beneficial means of combatting loneliness. But studies have found this simply isn't the case.

“The use of Facebook was negatively associated with well-being,” said Shakya HB, a professor of Health Sciences at UCSD, in a study published by Oxford University. “For example, a 1-standard-deviation increase in “likes clicked” (clicking “like” on someone else's content), “links clicked” (clicking a link to another site or article), or “status updates” (updating one's own Facebook status) was associated with a decrease of 5%-8% of a standard deviation in self-reported mental health.

This paradox, however significant, hasn't been entirely explained by the scientific community, and it would be hard to do so with a metric like “loneliness.”

The negative effects of technology on the human body may sound daunting, dangerous, and downright scary sometimes. But the reality is that, while these symptoms and sicknesses can be hazardous to your health, they are typically only brought about by overuse.

Too much of anything is never good for your health, whether it be technology, chocolate, or even going for a run. Moderation, in all its boring glory, is the only real way to make sure you're destined for a healthy life.

Put your phone away before you go to bed. Stand up from your computer for a few minutes every hour. Avoid scrolling social media feeds for hours on end. Go outside every once in a while (without Instagramming what you see out there).

Let technology be a pleasant addition to your full life, not the only thing you live for. Because, rest assured, you're going to feel the physical and mental effects of that dependence before you know it.