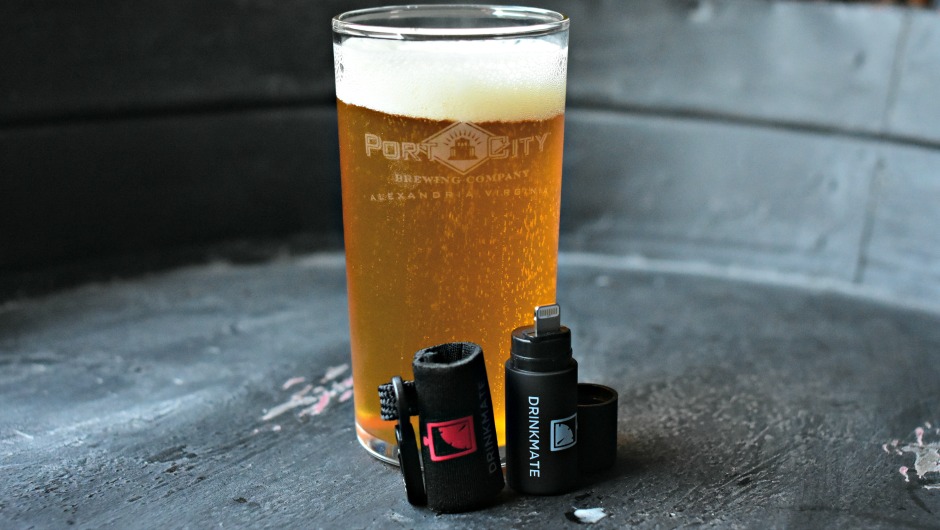 Last year during one of Tech.co’s startup tour events I stumbled upon an entrepreneurial duo showing off a very small piece of hardware. That piece of hardware was an Android-connected breathalyzer called the DrinkMate. It was so small in fact that it may even be the smallest one on the market.

At the time they only supported Android, but shortly after the event they launched a Kickstarter campaign for an iOS compatible version. Four days after the launch of the campaign they hit their goal, and nearly tripled it at completion. Needless to say I was intrigued, backed the campaign, and six months later I have the device in hand.

Even though their estimated shipping date was off by a few months, their team constantly kept backers up-to-date, and realistically shipped sooner than a majority of any other campaigns I’ve backed in the past. Most of the delays were out of their hands (FDA, Apple, etc.), and it’s evident that the team has done this successfully in the past.

So without further adieu, it’s time to progressively drink in the name of science and try this miniature breathalyzer out.

Miniature breathalyzers, even ones that connect to your phone, are not exactly a new concept; however, DrinkMate’s is certainly one of the smallest. Many of the others on the market have a caveat of only being used for entertainment purposes, which is a result of their potential for inaccuracy.

Having tested the DrinkMate and not directly compared it to a full blown breathalyzer that law enforcement use, I can’t draw a direct comparison in terms of comparable accuracy. However, I did note some accuracy issues, but much of that is also addressed within the app. When we first started to use the app, my wife who was the control subject had a .05 percent reading and had not consumed anything. I had a few sips and somehow had a zero. Once I started to actually drink beer, the readings appeared to be more accurate; however, they would vary if using it within a short window of time.

According to the app, it’s likely the DrinkMate still had moisture or other residue from a previous reading, which would affect the current one. When that appears to be an issue the app will create a countdown and clean the sensor, typically for about two minutes. If the sensor is clean, it will allow you to take a new reading. When asking the experts, it also became evident that the reliability of this kind of technology varies not only state-by-state, but also how the test in conducted and the hardware is maintained.

“I believe that any new devices, such as one that connects with a smartphone, would need to undergo judicial scrutiny should they be used in a DWI prosecution. I would expect that if a new device were to be used in New Jersey, a savvy defense attorney would appeal the use of the new device in order to determine its accuracy. In fact, the Alcotest 7110 MK III may be replaced soon and I expect the courts to be asked to rule on the accuracy of the new machine,” said Hackensack, NJ Attorney Jason T. Komninos. “With new technology coming out seemingly every day, it will be interesting to see how police officers employ smartphones in drunk driving investigations. I could see how a smartphone attachment might replace the PBT, but I do not expect it to replace the breath test machine that is used when the driver is taken back to the police station.”

For Police Officer and Police Academy Instructor Rj Beam, he further details the necessity of having a trained professional to conduct the test and ensure it’s functioning properly. In addition to Beam’s duties, he is also a court recognized expert in sobriety testing.

“As it related to the breath testers that work with phone they are most accurate. The problem often times comes into play is how the user operated the device. Our police Portable Breath Tester require a deep lung breath. Typically our roadside PBT will register a flow rate drop then pull in a specific volume of air into the test cell. Your typical civilian PBT just takes a recording on what is provided. Meaning a light breath could be sampled and thus not give a true blood alcohol score,” said Beam. “In addition is the routine calibration. We have a sample kit at the police department with a known alcohol level. That air is blown into the PBT to check the accuracy. If the device is not in calibration it goes for repair.”

Based on the insight from the professionals, there are two likely outcomes for devices such as the DrinkMate: For starters, they may go through rigorous testing, but the end user may not use the device properly, and secondly the device may not be maintained properly either. That doesn’t discredit this particular device, but means you should not rely entirely on the results.

According to DrinkMate’s accuracy tests they found a difference of +/- 0.01 percent BAC at a BAC of 0.02 percent. The sensor also has a maximum BAC is 0.20% BAC. Their tests were conducted from a third-party company, Lifeloc Technologies.

When it comes to design, DrinkMate stands apart. Not only is it likely the smallest connected breathalyzer, it doesn’t require a mouthpiece, and has no internal battery. It has a sleek matte black hard plastic exterior, a matching cap, and comes with a keychain holder. In comparison to the more standard portable breathalyzers, DrinkMate is at least half of their size. More specifically it’s 1.9 inches long by 0.65 inches in diameter, and only weighs .2 ounces.

To use the DrinkMate, all you need to do is plug it into the iPhone lightning port, open the app, and blow. From there a reading will appear, it will ask you if you’d like to also take a picture, or share the results. The app will then create a continuous time dated log of your results.

Typically for gadget reviews we rate them on a scale from 1-5, but due to the technical sophistication required for a breathalyzer to function and the varied readings, we’re simplifying our approach.

Overall, the DrinkMate breathalyzer is entertaining, but also provides some indication of how intoxicated someone may be. This is not the kind of device law enforcement would rely on for readings, yet, but if you are at a party and want to convince your friend not to drive, this should do the trick. The DrinkMate retails for $30 and is available for both iPhone and Android.