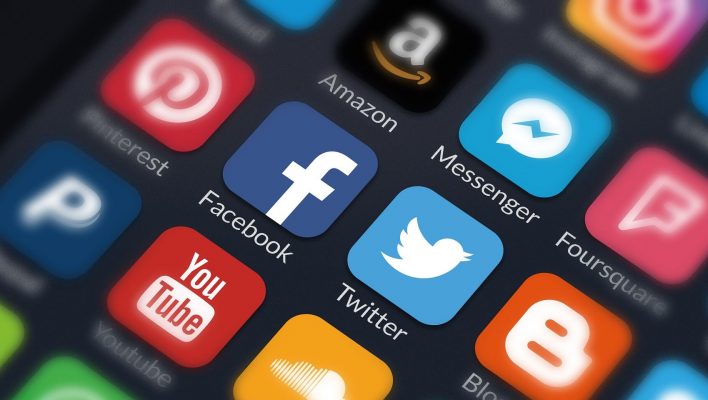 Since the launch of the original iPhone in 2007, apps have been a constant fixture on the phones in our pockets, offering everything from serious work tools to social media and entertainment. Now, thanks to a report by SensorTower, we know what were the most downloaded apps in 2019.

Facebook-owned WhatsApp remains at top of the charts – though the messaging app hasn't made as much of a dent in the US market, it's phenomenally successful throughout the rest of the world. Storming into the top five is a little app you may just have heard of called TikTok, which has experienced a great year (despite the odd controversy) and risen up the ranks.

Then there's Disney+, an app for a service that only launched in a select few markets in November, and yet still received an eye-watering number of downloads.

The rankings for the top app of 2019, according to the SensorTower report, all lean heavily into social media, which is perhaps somewhat unsurprising. However, despite only being in second place, it's TikTok that catches the eye on the list. The upstart video-sharing app has been a meteoric success story, especially when you consider that it was only made available outside of China in 2017. In 2018, TikTok charted in fourth place of the most downloaded apps, and in 2019, second. While WhatsApp has remained in pole position for the past few years, TikTok is jostling for its crown.

TikTok is a serious money-maker too, with revenue growing 540% in the last quarter. WhatsApp may be leading the charts, but Zuckerberg's messaging app isn't pulling in the dollars, and with the company's recent decision to back down from paid-for adverts on the platform, it could be a while before it can compete with TikTok financially. The latter made $40 million in December alone.

TikTok can thank its native China for most of its revenue. The country was responsible for 78% of TikTok's revenue in the last quarter of 2019. The US market contributed just 16% of TikTok's global revenue.

When it comes to new downloads, India has shown the most passion for the TikTok platform. Despite a slight dip in April of last year when it was banned by the government for 22 days, popularity has quickly increased, and the country is responsible for 45% of the app's downloads. 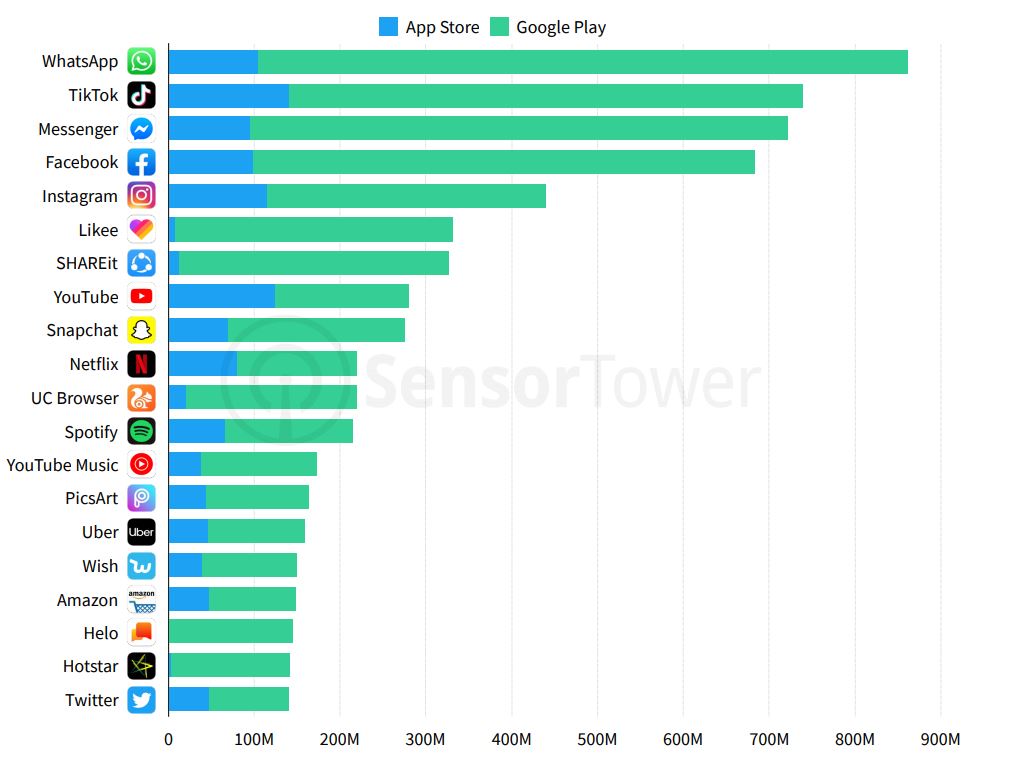 The Battle of the Streaming Services

Streaming video platforms are locked in a fierce battle at the moment. With even more to enter the market this year, it looks like 2020 will be a no-holds-barred fight to the death. Which platforms survive remains to be seen, but perceived wisdom dictates that those with established audiences and unique content will fair best.

The one exception to this rule appears to be the House of Mouse. Disney may have only launched its Disney+ service in November, but if its app downloads are anything to go by, it has hit the ground running. In the last quarter, the app was the most downloaded in the US, with 30 million downloads, beating the likes of Facebook and TikTok. Considering you need to be a subscriber to use the app, it certainly seems to bode well for the media company. As an example, Netflix currently has around 60 million subscribers, which it has studiously built-up over the past decade. Disney+ has reached half that number in just two months – although its 7-day free trial will naturally account for some of the curious first downloads.

In terms of other streaming services, Disney+'s 30 plus million downloads surpasses Hulu and Amazon Prime's numbers for the whole of 2019. Its app accounted for 34% of all VOD app downloads in Q4, with the next most popular, Netflix and Youtube, only netting 11% each. 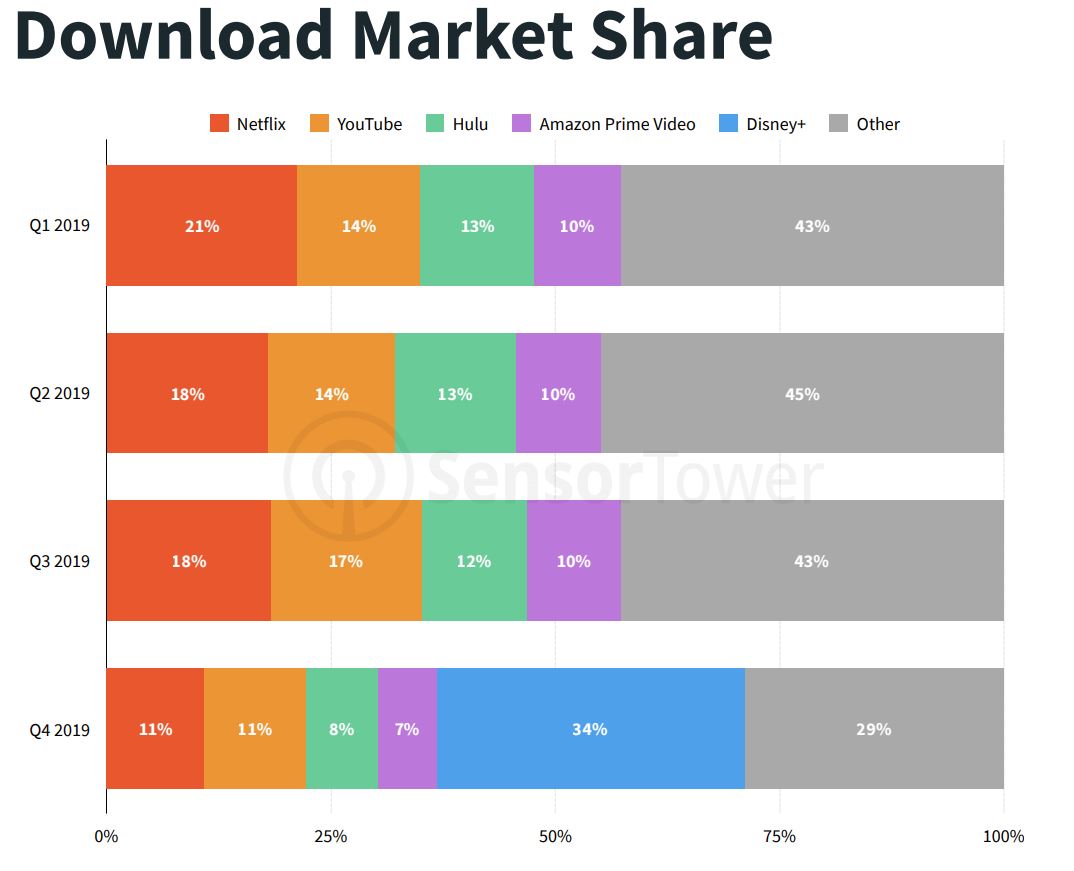 Most Downloaded New Apps of 2019

The top ranking apps of those that launched in 2019 might surprise you, depending on where you live. Chances are you've never heard of MV Master, the most popular new app with over 60 million downloads. The photo editing app is incredibly popular, but most of its success stems from its adoption in India, which accounts for more than 50 million of its downloads.

In second place is the Disney+ app – hardly a plucky underdog that's come out of nowhere. You might expect it to have done well, but it's worth remembering that the app launched in limited territories last year, and is still to roll out in a majority of global locations.

Third is another app that is probably missing from your phone – Jianying Vlog.  This video editing app is owned by ByteDance, the company behind TikTok. Only available on the Apple App store, it has amassed over 30 million downloads.

The rest of the top twenty new apps are pretty esoteric. There's CashBean, an India-based loan app, YOLO, an anonymous Q&A app that works in conjunction with SnapChat, and Bodybuilding Fighting, which as the name suggests is a fighting game featuring muscle-bound characters pummelling each other into submission. All in all, this group shows just how hard it can be to pinpoint the next mobile app trend. 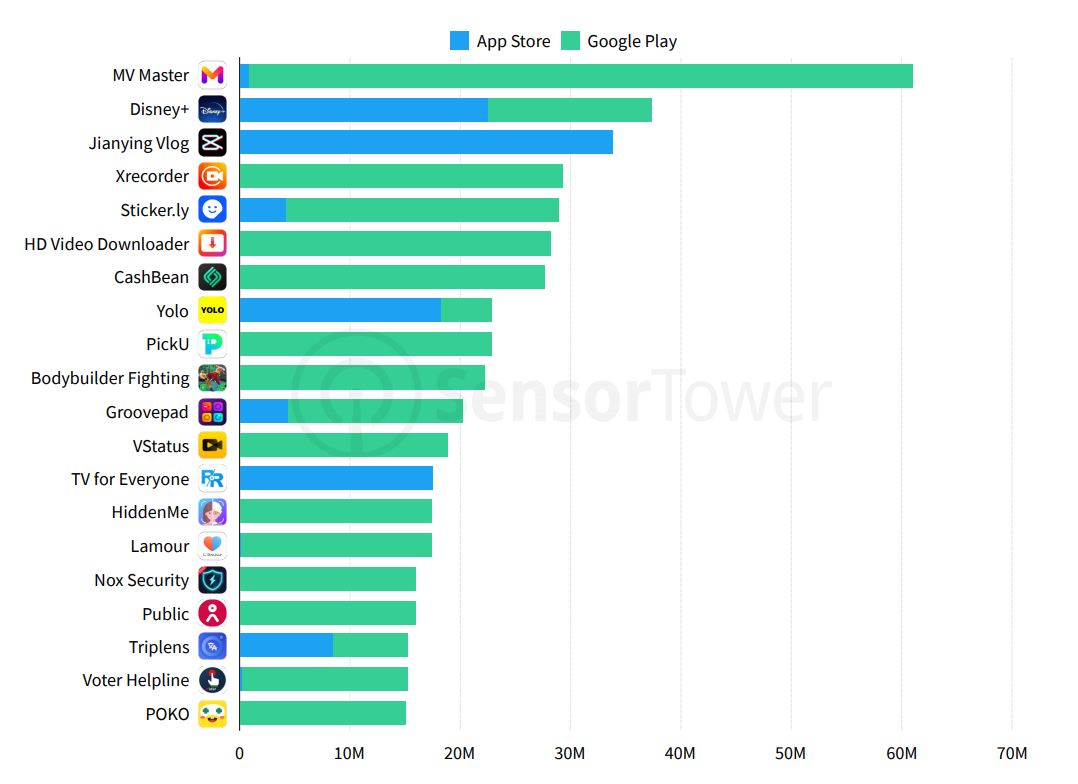