This content has not been updated since January 2021. For more recent tech advice for your business, visit our page on 2021's best mobile phones.

The Lenovo Legion Duel is a phone meant for gaming.

As you’d expect, the performance is remarkable. It also comes with some unusual gamer-centric touches, ranging from a motorized pop-up selfie camera to splitting the battery into two separate elements to help with heat dispersal. If you’re a gamer, it’s a good, but very expensive option. If you’re not, we’d avoid it.

The Legion Duel is a fascinating example of what can happen to a phone if you throw design conventions out of the window.

The rear cameras are located in the middle of the rear case, while the selfie camera rises from the side of the phone. Why? To make it easier to live stream yourself while gaming, of course. It even has two charging ports and two charging cables included in the box, to ensure you don’t run out of juice while gaming. Its UI design is even optimized to work perfectly when the phone is held horizontally.

However, as with other gaming phones, these seemingly innocuous design changes can have a big impact on day-to-day usability. So, can you use the Legion Duel as an everyday phone? And, if you can, should you?

The Legion Duel has some design choices which seem highly unusual at first, but make sense in practice.

Like most gaming phones, it has a distinctly ‘gamer’ design style. The rear case is emblazoned with a vast RGB notification light, and is covered in red and black accents. Round the front, the large 6.65-inch screen is surrounded by red accents, as well. Even the corners of the phone have been squared-off to fit the aesthetic, giving the Legion Duel an octagonal design.

That screen, by the way, is an AMOLED panel with a 1080×2340 resolution, a 144Hz refresh rate, and HDR10+ compatibility. In our view, it’s a lot better than the screens on rival gaming phones we’ve tried.

The Legion Duel feels like a thoroughly well-built phone. It’s weighty, tipping the scales at 239g, and it feels remarkably dense. There’s also precious little play in the motorized pop-up camera’s housing – we had no worries about it snapping off.

In hand, the Legion Duel feels massive. The weight, combined with the phone’s remarkable 9.9mm thick frame, makes it feel more like a small tablet than a phone. Of course, this isn’t uncommon for gaming phones – the Red Magic Nubia series of phones are pretty substantial as well, for example.

However, the Legion Duel’s most interesting design elements are to be found within the phone itself. For example, the battery is split into two separate cells and stored at either end of the phone. The chipset, processor, and camera hardware is all stored in the middle. All this is to make the phone more comfortable to use when gaming – the batteries are cooler than the processor under heavy loads, so when you’re holding the phone horizontally, you won’t be touching the hot processor.

One thing to bear in mind, however, is that the Legion Duel doesn’t come with a headphone jack. This means that you’ll need USB-C or wireless headphones to get the best audio when gaming. 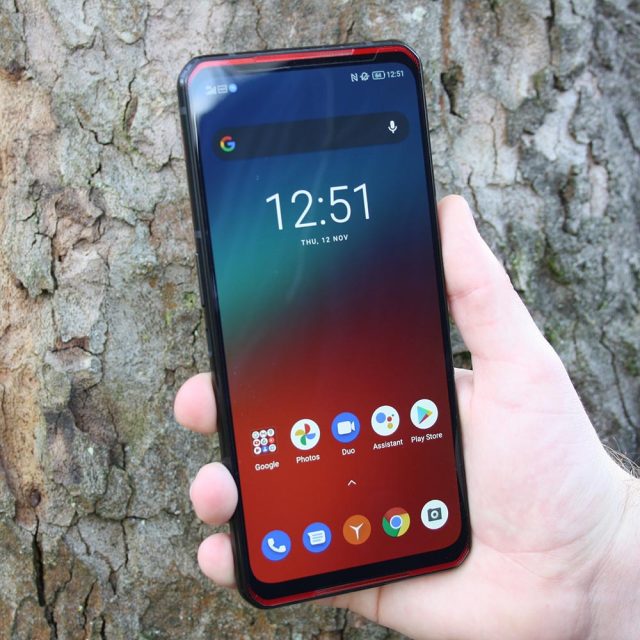 The Legion Duel is powered by the Snapdragon 865+ chipset, meaning 5G connectivity and rapid performance.

The 865+ chipset might have been replaced by the Snapdragon 888 over the last few months, but the 865+ is still perfectly capable of running all your favorite gaming apps with ease. For example, we were able to run PUBG Mobile at its highest settings with no issues.

Battery life is also very impressive. The Legion Duel has a huge 5,000 mAh battery – we were able to get around 17 hours of battery life and close to six hours of screen-on time.

What’s more, the Legion Duel allows for 90W fast charging if you use both charging cables provided at the same time. That remarkable speed means you can get up to 50% charge in just ten minutes. Opt for the single cable, on the other hand, and you’ll still receive 65W charging. 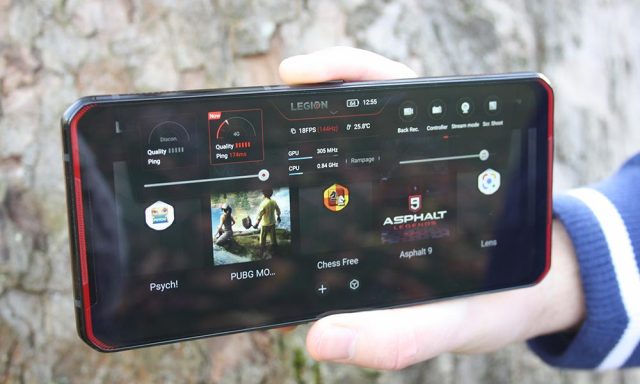 The Legion Duel has two rear cameras: a 64Mp main lens, and a 16Mp ultrawide lens.

As we mentioned above, the cameras are located in a fairly unorthodox location – in the middle of the rear case, rather than near the top.

The photos the phone takes are far from bad, but they’re not spectacular, either. The phone had some issues focusing, which led to some photos looking a bit soft. Color reproduction is generally pretty good, though some shots can look a bit gray if the natural light isn’t too bright.

Videos are ok. There’s some motion blur, and features can look a bit pixely. Stabilization could be improved a fair bit as well.

Round the front, the motorized pop-up selfie camera features a 20Mp lens. Selfies are not this phone’s strong suit – skin looks very washed-out and soft. It’s also quite strange looking at the side of the phone when taking a selfie. Videos from the selfie camera are similar, with colors looking washed out.

Lenovo Legion Duel Ease of Use

The Legion Duel’s software is remarkably easy to use, particularly for a gaming phone. In many ways, it’s similar to the phones from Motorola – the two companies are connected, after all.

Lenovo made a big deal about the phone’s software working brilliantly when held horizontally, and, well, it does. The gaming-specific overlays are nice, as well as being intuitive and unobtrusive.

However, the phone’s sheer heft makes it a bit of a pain. The thickness and weight make it almost impossible to use one-handed, and it is hard to lug around.

Perhaps the Legion Duel’s biggest impediment, however, is its price. It costs around $1,175.

That’s a huge amount of money for any phone – especially a gaming phone. Compared to other gaming phones we’ve reviewed, the Legion Duel costs almost twice as much.

At that price, there’s no real reason to buy the Legion Duel that comes to mind.

The Legion Duel is perhaps the most complete gaming phone we’ve reviewed. The software works well, and the performance is very impressive.

However, considering the phone costs more than $1,000, it's a very expensive piece of kit that we wouldn’t go as far as recommending.