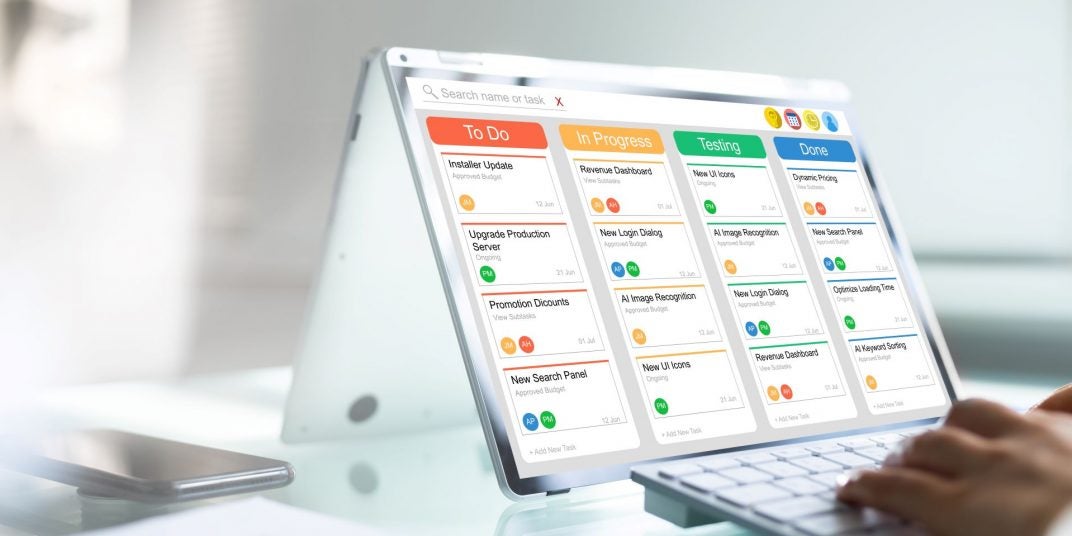 Kanban and Scrum are both project management methodologies that aim to improve the efficiency of workflows by breaking projects into smaller, easy-to-manage parts or tasks.

Kanban takes a visual approach to workflow management that focuses on reducing inefficiencies and backlogs in projects whilst tracking tasks on a board. Scrum, or Scrums, involves breaking up workflows into one to four-week ‘sprints’ of intense focus on specific tasks.

This guide will take you through everything you need to know to about the Kanban and Scrum approaches to workflow management and project organization.

Kanban vs Scrum: What’s the Difference?

Kanban and Scrum frameworks will help teams working on projects achieve similar goals, but there are some key differences between the two methods:

The main difference between the Scrum and Kanban methods is that the Kanban workflows are evolutionary, whereas Scrum workflows are compartmentalized.

A Kanban board divides project phases into separate columns (e.g. first draft, second draft, SEO check, published), and project managers will populate the board with tasks that can then be moved between phases, making it easier to visualize project progress. On a Scrum board, columns represent periods in the sprint workflow, and all tasks added to the board should be completed by the end of the sprint.

Kanban boards can be continually updated with any number of tasks, while Scrum boards have a set amount of tasks relating to a single sprint.

Kanban boards can be continually updated with any number of tasks (although there are limits on how many tasks can be set in each column), whilst Scrum boards have a set amount of tasks relating to a single sprint. This means Kanban boards don’t need to be reset and can be added to at any point, whereas Scrum boards are reset at the end of every sprint.

These frameworks sculpt the teams using them. Scrum teams have rigid roles, whereas teams using the Kanban method don’t require any structure or hierarchy at all.

Scrum teams are headed up by Scrum Masters and are usually small groups that rarely reach double figures. Each member of a scrum team has a set role, with an order and structure based around the completion of certain tasks within a sprint.

Unlike Scrum, the Kanban method can accommodate for a number of different teams working on different elements of the same project (as well as multiple projects) without confusion.

Kanban boards can be added to or changed at any point during a project, whereas Scrum boards will focus on a selection of (or just one) pre-defined tasks. Once a Scrum sprint has started, new tasks cannot be added.

If there’s a change of direction or a sudden influx of new tasks that need completing, Kanban team members can simply add this to the “work to do” column of their board. Scrum teams often complete multiple sprints, so feedback can be compiled in between sprints and used to improve future boards.

Another key difference between these two approaches to project management is their respective systems for scheduling work. A Kanban is a ‘Pull' system that uses all the available space on the board to ‘pull' new tasks into a given team's workflow. Below is an example from Zoho Projects:

Although there is some debate about whether Scrum is a ‘Push' or a ‘Pull' system – an argument can definitely be made both ways – it is generally considered the former, as scrum masters will ‘push' three or four tasks into a sprint, as opposed to ‘pulling' work into the available columns you may find in a Kanban board.

The Origins of Kanban and Scrum

The Kanban (which is Japanese for ‘visual board’or ‘signboard’) method was first used as a scheduling system to improve manufacturing by engineers working for Toyota. Now, it’s commonly used across a broad range of industries, and is included in most project management software.

The term ‘Scrum' is lifted from the game of rugby, and refers to a tightly bound group of players working towards a short-term, common goal – winning possession of the ball.

If you're familiar with the sport of rugby, you may recognize the term scrum – and that's exactly where the project management term originates.

In the game of rugby, a tightly bound formation of players from each team huddle together and push against one another to restart play, with a short-term goal of winning back possession of the ball. This formation is called a scrum.

What Are the Benefits of Kanban?

The Kanban method helps project managers and their team members clearly view tasks within a project, see how close to (or far from) completion they are, and generally assess the process. Other benefits include:

What Are the Benefits of Scrum?

The Scrum method has some clear advantages over the Kanban method, especially for teams completing feature-driven software or product development that can be easily split up into subtasks and subprojects. With the Scrum method:

Are There Any Similarities Between Kanban and Scrum?

Although there are plenty of differences between the Kanban and Scrum approaches to project management, there are definitely some important shared benefits as well. They both aim for success through efficient workflow management, so there's bound to be some key features they both offer. Both methods:

Should I use Kanban or Scrum?

If you're thinking about using either the Scrum or Kanban method to shape project delivery, you need to know what kind of situations and teams they each work best for. Every team is different, and the projects any organization undertakes in a given year may differ widely. For some, Scrum teams may improve efficiency, but for others, shifting all the work to the Kanban board will boost productivity.

Generally, the Kanban method will be useful if…

Generally, the Scrum method will be useful if…

How Do I Get Started With Kanban or Scrum?

The best type of program for making Kanban boards is project management software. Kanban boards are essentially a ubiquitous feature with this software – you're unlikely to find a top provider that doesn't let you build one.

The universality of this feature is great news, as it means you can focus on selecting software with other features you're undoubtedly going to find useful. If you're delivering a project and are thinking about ways to improve efficiency (like adopting a workflow process philosophy), there's no better place to start than with software dedicated to doing exactly that.

If you're delivering a project and are thinking about ways to improve efficiency, there's no better way to start than with software dedicated to doing exactly that.

At Tech.co, we test the best project management software providers before reviewing, rating, and ranking them. Check out what we found out about the biggest names on the market when we put them through their paces:

No – Kanban does not work in sprints, and instead facilitates a continuous workflow that can be updated in real time. The Kanban method is much better suited to projects receiving work at an irregular or uneven pace, and projects within which task completion time varies greatly.
Kanban and Scrum are different methodologies that are implemented to achieve the same goal – boosting project efficiency. However, the Kanban method creates a continuous workflow that new tasks can be ‘pulled' into, whereas the Scrum method ‘pushes' tasks into one to four-week sprints with an intense focus on specific jobs. The nature of these two different methodologies means Kanban teams don't necessarily need structure or hierarchies, whereas Scrum teams are headed up by leaders (scrum masters) and team members are given specific roles.
Jira is one of the best project management software packages currently on the market, and has features that will support teams deploying both types of project management methodology. Both Scrum boards and Kanban boards can be created and populated with project information inside Jira.