Apple iPad Mini
Small but powerful, this is the best portable iPad, newly updated
4.0
In Short

After years without a refresh, Apple has finally brought the Mini kicking and screaming into 2019. Kitted out with an A12 processor, it doesn't pull its punches when it comes to power, and its diminutive package seem to make it the ultimate travel tablet. If you've been patiently waiting for the Mini upgrade, this is one hell of a reward.

The iPad Mini has gone somewhat unloved by Apple in recent years. While the standard iPad and the Pro lineups have benefited from regular refreshes, the Mini has languished like an elderly dog in the pound, trying to tempt owners with its aging 2014 specs. Meanwhile, all around it, much younger pups yap excitedly about their cutting edge processors and modern features. Well, it’s finally been given the update we’ve all been waiting for – so is it time to give the Mini a home? We think so.

To kick things off, let’s talk about this plucky little device’s processor. The previous model, the Mini 4, rocked an A8 processor – fine for release in 2015, but not overly impressive by today’s standards. The 2019 Mini has been upgraded to an A12 chip, making it as powerful as the new iPad Air. It’s quite generous of Apple to stick this chip in the Mini, the same one that powers the iPhone XS, given that the standard 2018 iPad is still using the still decent A10. Not that we’re complaining – the end result is a little tablet which can multitask and open apps with pleasing speed. You can flit between apps without any sign of the Mini struggling, and the experience is buttery smooth.

Apple has also added some new features, such as compatibility with the Apple Pencil. You can now scribble and scrawl on your Mini with abandon, and it adds a level of tactileness that allows for finer work on the touchscreen than our stubby fingers would allow previously. 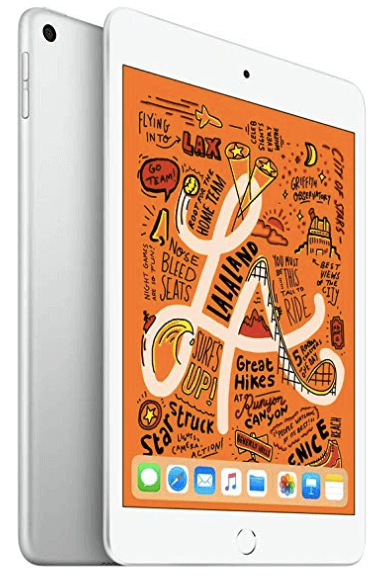 The iPad Mini has a fairly typical battery life in the iPad lineup. Apple has always managed to give its tablets excellent staying power, and advertises that the Mini will last around 10 hours if you’re playing video, or 9 hours if you’re surfing the web.

In real world terms, nobody is likely to use a tablet for a 10 hour stretch. and the upshot is that the battery on the Mini can last you a week, or even longer, as you dip in to check social media, catch up on streaming, or check the weather throughout the day. As with all iPads, it’s quick to wake up, and there’s no noticeable power drain in sleep mode – that little battery percentage number will remain the same as it was when you last put it down.

Previously, the iPad Mini had represented miserable value for money. Despite being five year old tech (a veritable lifetime for an iPad), Apple bizarrely insisted on charging more for it than the newer 9.7-inch iPad, which boasted a much faster processor. Still, if you wanted a small iPad, it was your only choice.

In 2019, the Mini is much more appealing. Yes, it’s still more expensive than the 9.7-inch iPad, but it’s a lot more justifiable now, thanks to the A12 processor (compared to the iPad’s A10). The entry level model also starts with 64GB storage, compared to the iPad’s 32GB. Not only that, but the front camera has a resolution of 7Mp, in line with the rest of the line (the original iPad makes do 1.2Mp).

The 2019 Mini, like the Mini 4, retains Apple’s coveted Retina display. If you’re a numbers person, then you’ll want to know that this means – 2048 x 1536 resolution, with 326 pixels per inch. Not a numbers person? No problem, we can translate – it’s crisp as heck. And while it’s not quite as impressive as what the Pro models are capable of, it’s also half the price.

Trust us when we say, you’ll have no complaints about the image quality. And while the smaller screen might not seem suitable for long Netflix binges, it actually works – while testing the Mini, we stuck on a movie to try it out as a media device, and had to reluctantly put the popcorn back in the cupboard and get back to work. The display’s resolution provides a great level of detail, while the screen size is just large enough to enjoy some serious streaming.

Not only is the screen suited to media, but the speakers manage to keep up, too. You might expect a smaller tablet to struggle to make itself heard, and while tablets like the Amazon Fire 7 have a pretty weedy audio presence, Apple have managed to squeeze in some impressive speakers here. Audio buffs will opt for headphones every time, but the delivery of the sound from the Mini is crisp and clear – and yes, you can definitely turn it up to a decent volume.

Confused about which iPad to buy? We have a guide for that

iPad Mini: The Not So Good

Apple’s design is revered worldwide, and seen as a benchmark for most other tech companies. On release, the iPad Mini’s design was seen as a good enough stab at a smaller iPad – essentially, it was a standard model that had shrunk in the wash. That was enough in 2015, but in 2019, not much has changed. The 2019 Mini design is surprisingly similar the Mini 4, and honestly, that’s somewhat disappointing.

It would have been great to see Apple make more of the resurrection of the Mini – a smaller bezel would have gone down a storm, but it seems its designers were off that day, and so we get a 2019 Mini that looks pretty much like a 2014 Mini. It’s not all bad news – the headphone jack has remained, rather than being ditched like it was for the Pro models, while naturally, the Mini is the lightest model in the range. At a little over 300 grams, it’s easy to hold in one hand for long periods, and the dimensions (8 inches by 5.3 inches) mean that you can easily slip it into a bag or coat pocket.

The addition of Apple Pencil support is a nice touch, but comes with a couple of drawbacks. At $89, the Apple Pencil isn’t cheap, and the Mini only supports the first generation model, which has a more limited feature set than the Pro-only gen 2 version. It’s still a nice addition, although we think more dedicated artists and doodlers will appreciate the screen real estate of one of the larger models.

With both the 2019 Mini and the 9.7-inch iPad sitting at the entry level end of the pricing spectrum, most consumers will be making the choice between the two. The question is, which one deserves a place in your (large) pocket?

While the Mini is the more powerful of the two, we don’t think the average user will notice much difference in daily use – especially without the privilege of having the two side-by-side for comparison. Yes, it may be a few years old now, but for streaming, browsing and general app use, the 9.7 iPad’s A10 chip still pulls its weight.

For those after a small but powerful tablet, the Mini really does do it all. While its screen size is just a couple of inches smaller than the 9.7-inch iPad, it feels a lot less unwieldy, and is a much more attractive prospect for throwing into a bag. It comes at a price, starting at $70 more than the 9.7-inch – but it you’re a believer in the Mini’s ‘small but perfectly formed’ ethos, it’s the obvious choice.

The Mini is back, and we couldn’t be happier. Ok, maybe we could. Would it have killed Apple to improve the design and reduce that chunky bezel a little? That aside, the Mini justifies its place back at the table as not just one of the best iPads available, but one of the best tablets, period. Its diminutive size gives it a unique selling point, making it ideal for those who want a portable tablet that won’t take up too much space, and yet doesn’t compromise on specs.