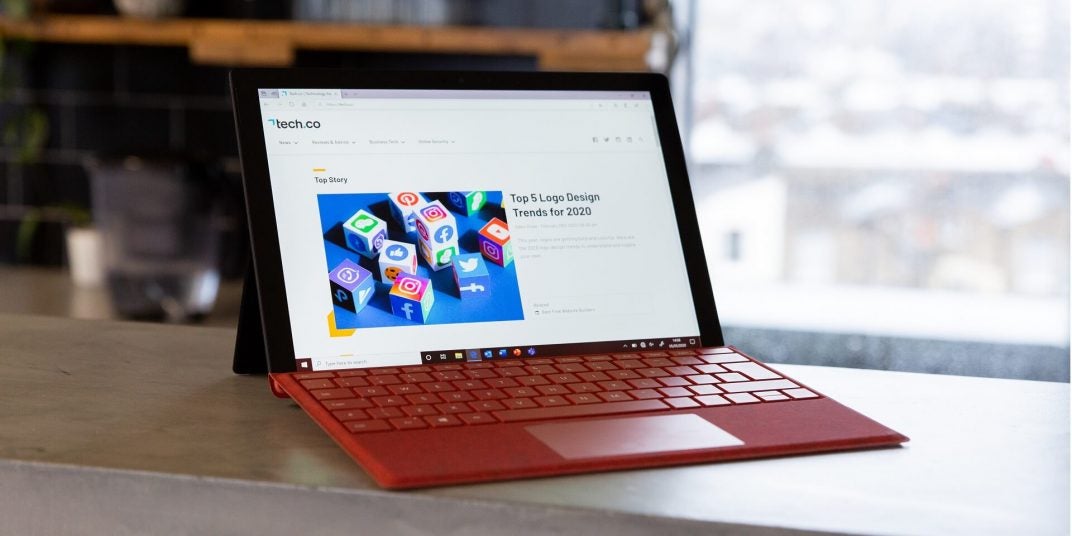 Microsoft’s Surface Pro range of tablets harbors ambitions to be the company’s iPad killer. We’re now seven years since the initial release of the first Surface model, and while Apple may not be looking too panicked, the new Surface Pro 7 is a good bet for those that want a high-end tablet. With the small iterative changes added to the Surface Pro 7, it retains its crown as the best Windows tablet on the market.

If you’re after a device that can sit comfortably on the line between laptop and tablet, then the Surface Pro 7 is about as good a choice as you can make. It’s a powerful device, with a great screen and some convincing specs if you opt for the top-end model (more on those options, later).

What can a Surface Pro 7 do?

The Surface Pro 7 pitches itself as a laptop/tablet hybrid, and honestly, it’s one of the more convincing examples out there. This is thanks in part to the kickstand, the built in support that folds out to hold the Pro solid when in tabletop mode.

The days of precariously balancing your tablet against the salt cellar in a cafe are now officially over, and what’s more, this thing is sturdier than Bill Gates’ bank balance. Like most hybrids though, it doesn’t feel too secure on your lap. The kickstand really does need a flat surface, and unless you’re a medical oddity, that doesn’t include your knees.

The kickstand really does need a flat surface, and unless you’re a medical oddity, that doesn’t include your knees.

In your hands, the Surface Pro 7 feels reassuringly substantial, especially with the keyboard cover attached. The device weighs 1.7 pounds without the keyboard, making it heavier than the iPad pro (1.39 pounds). It’s hardly waif-like, but compared to a traditional laptop, light enough. A MacBook Air, for example, weighs 2.75 pounds.

First things first, the Surface Pro 7 is not a huge lunar leap away from the Surface Pro 6. Put them side by side and ask anyones to identify the newer model, and they’ll probably struggle.

Even the internals haven’t seen much of an update, although the entry-level m3 processor has now been ditched, which makes sense. The low-end processor may have made the entry-level Surface Pro affordable, but it was like sticking a hamster in a wheel under the hood of a Ferrari.

Now, users are left with the more palatable decision of a 10th-generation Intel Core i3, i5 or i7 processor. This means that the device won’t feel underpowered, even at the lowest price point (though we’d recommend opting for at least 8GB of RAM option, and not the cheaper 4GB). The Pro 7 starts at $750, but those looking for a more budget option can consider the Surface Go instead.

Another big change is a USB-C port, making its debut here on the Surface Pro 7. It’s somewhat surreal that it’s taken this long, but finally, we’ve got it. And we mean “it”. You only get one, so you’ll need to ration what you plug in.

You only get one USB-C port, so you’ll need to ration what you plug in.

However, you can at least now use this port to charge the device, connect to an external monitor, or the other wondrous things that USB-C allows. The Pro 7 ships with a charger with proprietary Surface Connect connection, so at least the USB-C port won’t be unavailable while you juice up the tablet.

Other connections include a USB-A port, SD card reader (great for adding cheap storage), and a headphone jack, which is a welcome sight, given that Apple have ditched it from its iPad Pro offering. One other slight change for the Pro 7 is that it now features improved microphones, so video/audio calls should be clearer.

For comparison, the 12.9-inch iPad Pro has a PPI of 264, and it really does feel like the Surface can hold its head up high when the two are side by side.

Audio is handled (as with the previous model) by two front facing speakers, and they do a respectable job for a relatively small device. Feel free to slide that volume bar to the right – the Pro 7 manages to deliver loud audio without any noticeable distortion. Coupled with the screen, we think it makes for a nice little media device.

One of the more important aspects of a portable device is battery life. A laptop or tablet is no good to anyone if it can’t provide a decent amount of life. Here, the Surface Pro 7 is…fine.

We used it away from an outlet consistently during our hands-on time, and on average, we found that we were just about getting eight hours from it. That’s when using the Surface for a mix of tasks, including browsing, watching video and general work.

If we’re honest, we’d have liked a bit longer from the battery. It'll last a working day, but we’d still appreciate another hour or two for some Netflix on the way home.

If we’re honest, we’d have liked a bit longer from the battery. Eight hours is basically a full working day, meaning that the battery will probably run out of steam around the same time you do. But we’d still appreciate another hour or two for some Netflix on the way home. Take note, Microsoft, as Apple’s iPad Pro manages over 10 hours… 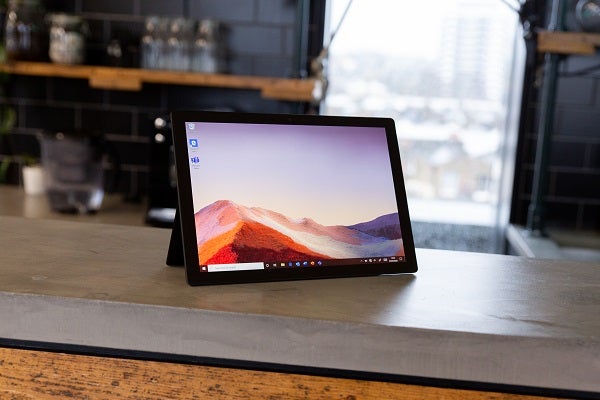 Stop us if you’ve heard this one before, but there’s a common problem for any tablet that dreams of one day growing up to be a laptop – accessories.

While your average laptop comes fresh out of the box with a keyboard, the Surface Pro 7 asks that you pay extra. Oh, and while you’re at it, you’d better spend on a mouse. And maybe a stylus.

The Surface Pro 7 asks that you pay extra for a keyboard. Oh, and while you’re at it, you’d better spend on a mouse. And maybe a stylus.

Whether or not you think the cost of the accessories outweigh the disadvantages of a standard laptop is up to you, but be prepared to open your wallet a little further for the full experience. In fairness to Microsoft, Apple’s iPad Pro tablet range presents the same issue.

The Surface Pro 7’s main drawback is its closest competition, the new Surface Pro X. With its cooler design, dedicated bespoke processor, LTE and better battery life, the Pro X suddenly makes the Pro 7 shift from the darling prodigy to the middle child.

The Pro X even has two USB-C ports. Phew. It comes at a price though, and you’re looking at $900 currently for the entry-level model (and again, get your credit card out for those accessories).

While we’d recommend the Pro X over the Pro 7 in terms of the merits of the hardware, that price difference can’t be ignored. For most users, the Pro 7 will be an excellent choice. Plus, the odds are pretty low you’ll ever end up in a coffee shop staring enviously at another patron’s Pro X. 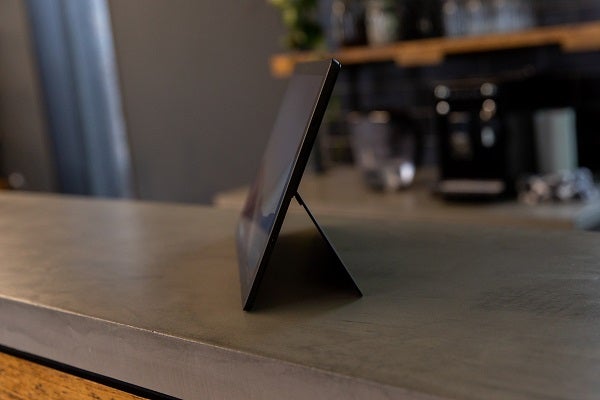 The tablet market has shrunk considerably over the years, with many companies deciding to focus on other areas (pour one out for the discontinued Google Pixel Slate). For anyone looking out for a premium Windows tablet, it’s slim pickings. But the Surface Pro 7 is undoubtedly the one to go for in 2021. The existence of the Pro X does muddy the waters slightly – it’s a better product after all, but the cheaper price tag makes the Pro 7 the more appealing of the two devices. Assuming you don’t have a Surface Pro 6, that is – if you do, the Surface Pro 7 doesn’t do enough to justify an upgrade.
Buy on Amazon
About our links