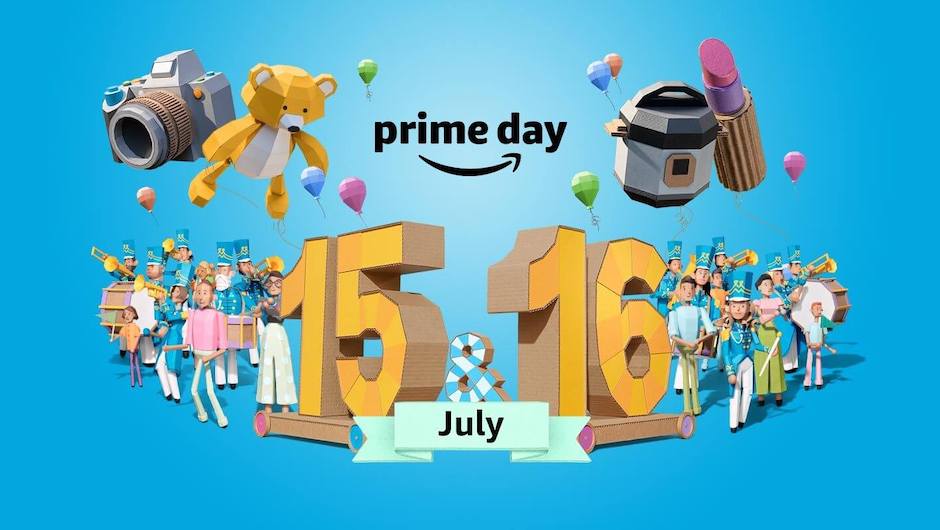 Hope you didn't forget to get in on the sales this week, because Amazon Prime Day is officially over and the massive two-day event continued its storied history of making the Seattle-based online retailer a whole bunch of money.

With its fifth year in the rear view mirror, it's safe to say that Prime Day has been a decided success for Amazon. Launched in 2015, the sale-a-bration has become an annual tradition on par with Black Friday and Cyber Monday, with huge savings on everything from electronics and clothing to furniture and food.

The event has become so huge, in fact, that Amazon has been making money on Prime Day at such a notably consistent rate that it's become the focus of ecommerce studies. And one has shown that the huge sale is bringing in money like clockwork.

How Much Money Does Amazon Prime Day Produce?

According to data from Statista, Amazon Prime Day revenue has increased on a substantially regular basis, showing that the company has clearly got this whole online sales thing down pat. The graph below shows their sales (and estimated sales for 2019) throughout the years, while also showing the length of the sale.

Granted, the hourly increases are likely fueling some of this growth, but that doesn't make Amazon's achievement any less impressive. After all, with these added hours, we could be seeing an Amazon Prime Week before we know it.

The report from Statista also points out that sales aren't the only way Amazon makes money from Prime Day. Because the discounts are exclusively available to Prime members, the sale is designed to attract non-members, perhaps even more so than making sales. And it's working, as the report pointed out that “roughly one in ten non-Prime households will sign up for Prime during Prime Day.”

How Much Has Retailer Participation Grown for Amazon Prime Day? 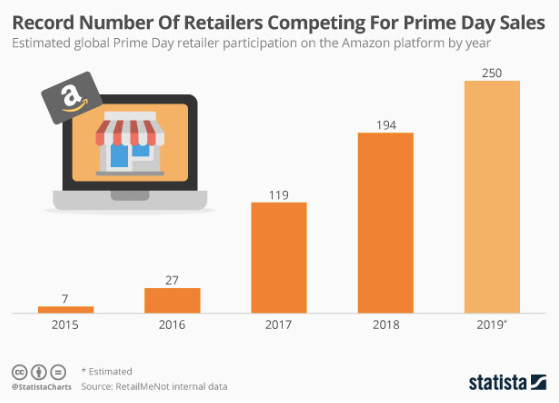 Consumers and Jeff Bezos aren't the only ones reaping the benefits from Prime Day though. Despite a decidedly slow start in their first year, Amazon has now tapped a huge number of retailers to host their own sales during the event, driving even more users to take advantage. As you can see from the graph, retailer participation in Prime Day has skyrocketed in recent years, with an estimated 250 retailers participating in the sale-a-bration this year.

While this might seem inconsequential within the ecommerce landscape, the fact that Amazon is swaying retailers towards Prime Day is significant because of one huge retail holiday season that non-parents forget about: back-to-school.

Mid-July is admittedly a bit early to begin shopping for backpacks and pencil cases, but laptops and tablets are becoming more integral to the classroom than ever, and you can't beat Prime Day deals on those items. If Amazon can continue to draw retailers to Prime Day, there could be a notable retail shift in regards to when parents start spending money for their children before the school year starts.

With all this Prime Day hype, it's worth asking whether or not these sales are actually worth the hassle. After all, more than 100 million items were sold in 2018, so checking up on the value of these deals is a matter of principle for diligent shoppers.

Fortunately, Prime Day does offer some substantially discounted products, but the key is to not get too overzealous. While they offer low prices on some items, others are relatively unaffected, which can frustrate some hungry shoppers. After a little research though, we found that these deals do pop up at later times in the year, around the holidays most notably.

Simply put, don't break your back to find a low price on Prime Day. If you were planning on buying something anyway and Prime Day happens to get you a deal, then more power to you. But don't freak out and purchase a knockoff just because you want the discount. Odds are, you'll be able to get a lower price for the real thing if you just wait it out.